Plus, more on the ever-changing Eagles injury-front 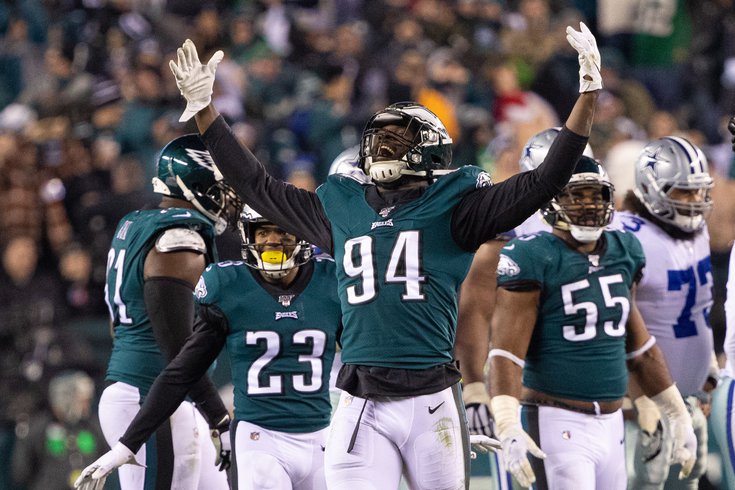 The media-attended portion of Philadelphia Eagles training camp is now complete, and on our final day of coverage we were treated to a scrimmage at Lincoln Financial Field. As always, and for the final time in 2020, we have practice notes.

• There were two noteworthy injuries today:

Carson Wentz did not practice today. He was listed as "day-to-day, lower body injury." It is an unspecified soft tissue injury. The Eagles say it's just precautionary, and not serious. I'm inclined to believe that here. Wentz was present at practice, on the field all day, and engaged. Still, we'll see.

During practice, on a pass thrown to Jalen Reagor, Avonte Maddox made a nice pass breakup, popping the ball in the air, which landed in the hands of Will Parks for an INT. While trying to tackle Parks, Reagor went down and clutched at his left wrist. He stayed down momentarily, before jogging off with his limp left arm just sort of dangling. Trainers looked him over on the sidelines, and he appeared to have significant discomfort. He then went inside, again, with his left arm just sort of hanging.

It turns out that it is Reagor's shoulder, which makes sense the way his arm was hanging. Someone from the Eagles texted Adam Schefter to say they think hope he's fine.

Eagles’ rookie WR Jalen Reagor is undergoing an MRI on his shoulder after injuring it during practice today, per source. Team doesn’t believe it is serious, but doesn’t know for sure, thus the MRI.

For what it's worth, Reagor tweeted that he'll be back soon.

With Wentz and Reagor out, Zach Berman of The Athletic made this crazy observation:

At this moment, Eagles are now practicing without their top picks in the last five drafts:

• We haven't mentioned him much this camp, maybe because he was sort of a "will he break out" guy during 2019 camp, but Josh Sweat has played well this summer, consistently creating disruption in the backfield.

Today, Sweat exploded against an over-matched pair of first-team offensive tackles in Matt Pryor and Jordan Mailata, but mostly Pryor, who was playing LT. Sweat abused Pryor all day long, racking up sack after sack after sack. I wasn't counting, but I would say that he had anywhere between five and 10 sacks today. It was probably the single-best one day performance by an Eagles player this camp.

In related news, Pryor is not a LT. We broke down his 2019 snaps back in April, and came to the following conclusion:

Pryor is a backup only, in my view, and maybe only at guard. His size and power are nice, but if he were to have to start multiple games, opposing defensive coordinators would look to put him in situations where he was forced to try to handle speed, and I don't think that would go well.

Today Sweat did indeed beat him with speed, and when he had Pryor thinking about getting beaten by speed, he countered with speed-to-power rushes that were equally effective. It was the practice equivalent of the Winston Justice game.

Of course, Jason Peters no doubt took interest in Pryor's alarming performance today. Peters signed a one-year deal worth $3 million (and up to $6 million with incentives) to play RG. He wants to be paid more to move to LT, and so, for now, he remains the RG.

Perhaps Jordan Mailata is up next at LT? Why was Pryor, who is more comfortable on the right side, at LT, and Mailata who is more comfortable on the left side, at RT? My takeaway is that the Eagles just believe that Pryor is a better player than Mailata, at whatever position, much in the same way they felt Halapoulivaati Vaitai was simply the better player than Pryor, at whatever position, when they gave him the first shot at filling in for Brandon Brooks last camp when Brooks' availability for Week 1 was still in doubt.

Anyway, yada yada yada, the Eagles are going to have to pay Peters. He has leverage, and he is going to be able to exercise it.

• The offense in general was sluggish all day. There were all kinds of pre-snap penalties, including back-to-back false starts by Peters and Pryor. Part of that was no doubt because Wentz was out.

While Jalen Hurts had a beauty of a throw deep to Manasseh Bailey that went for a long TD on the final play of the day, I thought he struggled to get the ball out quickly. He has a ways to go in making anticipation throws at this level, which is certainly normal for a rookie. Currently, he needs to see his receiver come open before he'll throw. That leads to a lot of plays in which he'll hold onto the ball for five or more seconds. On one red zone rep, Hurts ran around in the backfield for a while before taking a 15-20 yard sack.

• Nate Sudfeld made his share of nice throws today. He connected with J.J. Arcega-Whiteside on a back shoulder throw, that was high, but really in a perfect spot against a smaller Avonte Maddox. JJAW plucked the ball out of the air with a nice hands catch, and kept his feet in. Sud also hit Travis Fulgham on a pinpoint back shoulder throw.

Sudfeld's biggest strength is the deep ball, which he has exhibited on numerous occasions in preseason games. Today he hit John Hightower on a 75-yard TD throw deep down the left sideline, though credit Hightower for getting a good three yards of separation and making it easy.

It should also be noted that while Wentz and Hurts are more athletically gifted, Sudfeld isn't a statue in the pocket. There were a few times he escaped the pocket and picked up good yardage on scrambles.

• Getting back to Hightower, he has had a simply outstanding camp. He makes a couple big plays seemingly every day, but without the typical rookie mistakes.

In addition to the deep ball he caught from Sudfeld, he also had a really nice contested catch in the end zone. On a play in which Craig James had good position on a fade, Hightower was able to sort of break up a potential interception by reaching over James, and getting the ball to pop up in the air, which he then corralled while keeping his feet in for a TD.

I don't know what kind of role he'll have just yet, but Hightower is going to get some snaps in the regular offense Week 1. Book it.

• James had a highlight today. He stayed in phase with DeSean Jackson deep down the sideline, and intercepted a Hurts pass. He then weaved his way through the offense for a pick 6. James is one of the Eagles' best special teamers, and he's, you know, available, which is more than can be said of Sidney Jones, who did participate in 7-on-7 drills, but not the scrimmage.

• In addition to Sweat, Casey Toohill was around the quarterback a lot today, but there was a running play that really stood out to me. On a jet sweep to the shifty Marcus Green, Toohill pursued the play from behind and make a tackle for a very short gain. Toohill's impressive athleticism was on display there. I am convinced that he has already stamped his ticket to the roster.

• Throughout the practice, the Eagles had fake crowd noise playing on the in-house speakers. It's awful. It really sounds more like a baseball game than a football game, in that it's just sort of prolonged buzzing from the crowd, but with the volume turned up. Brandon Gowton likened it to more of a noisy bar, which is think was a good comparison. I took some audio of it during practice:

We watched two and a half hours of practice with that constant noise in our heads. Does that sound complainy? Well, I challenge you to leave my audio up and let it play on a loop for a while, lol.

At one point, during a "backed up in their own end" series, Doug Pederson waived his arms, asking that the volume be turned up, and they obliged by jacking it up to, ohhhh, I don't know, "Top Gun jet taking off" levels? I'm grateful I wasn't watching practice with a hangover.

• And so ends 2020 Eagles training camp, or at least the parts we're allowed to watch. On a personal note, I've been doing this long enough that I forget sometimes to appreciate the fun job that I have, but today was a day that was almost impossible not to savor. I was one of fewer than 20 people not directly affiliated with the Eagles at the stadium today, watching the team scrimmage, from section 103, on a gorgeous 80-degree today. So not to get all sawft here, but I guess I'd just like to quickly thank my family who helped me get to this point, as well as my readers (especially the regular commenters here on the site), and the people at Philly.com and PhillyVoice who gave/give me an opportunity to cover a professional football team.