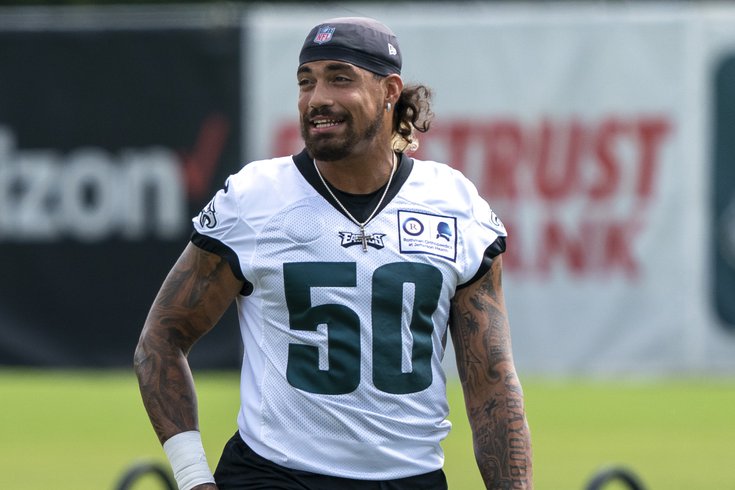 It's been a while since the Eagles have had a player with an "EEEEWWWWW" sounding name that's fun for the fans to yell, like "DUUUUUUCE," for example, so Duke Riley could serve in that role. Oh wait, the pandemic. Nevermind.

Day 7 of Philadelphia Eagles training camp is in the books. The Birds started out in pads, and then about an hour and a half into practice, everyone took their shoulder pads off, which is something I've never seen before in an NFL training camp.

After the players took off their pads, Doug Pederson strolled over near the media, mimed like he was typing on his phone like a reporter, and said, "We're getting soft!" Ha. Let's just get right to the notes.

• It appears that the leading candidate to start at linebacker opposite Nate Gerry is Duke Riley. In case you're unaware of Riley's background, he was originally selected in the third round of the 2017 NFL Draft by the Falcons. He appeared in 32 games for Atlanta, with 16 starts, but had a disappointing career there. In 2019, during the regular season, the Eagles made the following trade for Riley:

Including the playoffs, Riley played only 35 snaps in the regular defense in 2019, however, after Kamu Grugier-Hill went on IR, the Eagles made Riley the special teams captain. He had a share of the Eagles' team lead with 10 special teams tackles, and was thought of my most close observers of the team as a near-lock to make the roster heading into 2020 training camp.

In practices, Riley has been splitting time with T.J. Edwards for snaps in nickel (essentially the base defense these days), but appears to be getting more reps than Edwards.

"He helped last year," Jim Schwartz said of Riley on Monday morning. "He was out there in a bunch of our short-yardage situations and our four-linebacker situations and did a good job every time he was on the field. He was ready to play a more expanded role if we had had injuries and he had been forced to, but I would sort of put Duke in the same category as T.J. Edwards. Both of those -- one guy was an undrafted free agent and another guy was an acquisition partway through the season.

"As the year went on, both guys provided quality snaps for us, and their knowledge of our scheme and everything sort of increased throughout the season. Duke has great speed. He's not the biggest linebacker in the world but he does have good movement skills and good speed. He's not in a situation where he's trying to learn the defense during training camp. He was learning sort of in the middle of last season.

"But you can see him sort of present his skillset a little bit more clearly when it's not the middle of the season and you're just preparing for a specific opponent and you're also trying to prepare guys that you're expecting to play in the game. He's had a good training camp so far."

As Schwartz noted, Riley is an undersized linebacker, but he does have good athleticism:

On Monday, Riley had an impressive leaping interception of Nate Sudfeld. He also had a sack working around the edge against Jordan Mailata. His athleticism is notable on the field in practice, but a pairing of Gerry and Riley would perhaps leave the Eagles somewhat vulnerable against the run. Gerry wasn't a great tackler last season, and there are legitimate concerns about a guy like Riley being able to stack and shed in the run game.

Conversely, Edwards was a stud against the run in 2019, but there are concerns about his ability to cover running backs and tight ends because of his lack of athleticism.

Perhaps the Eagles can interchange Riley and Edwards, depending on the opponent? For example, maybe Edwards plays more against a teams with high-quality rushing attacks, like the Cowboys, 49ers, Seahawks, and Ravens, while Riley might play more against pass-heavy offenses with good receiving backs, like the Saints and Cardinals?

Anyway, the young receivers continue to do good things. John Hightower was out with an illness today, in case you're wondering.

• It'll be interesting to see what the Eagles do at the fifth defensive end spot. Two players who cost next to nothing (2018 UDFA Joe Ostman and 2020 seventh round pick Casey Toohill) have definitively outplayed a pair of players who each cost a fourth round pick in Shareef Miller and Genard Avery. If I'm picking the roster, having no care in the world about the costs to acquire each player, my "fifth DE power rankings" would be:

On Monday, Toohill beat a block on a pitch play to his side for a TFL, while Ostman generated pressure at times rushing from a DT spot in a hurry-up situation, sacking Jalen Hurts on one play and knocking the ball out of his hands for a forced fumble. (They're not really supposed to do that, but Ostman already had the sack, and Hurts was sort of ignoring that he was still lingering near him, so Ostman swatted the ball away. The coaching staff didn't seem to mind it.)

Meanwhile, Avery left practice early with an injury, and Miller was invisible, as usual.

• Jalen Mills has had a strong camp after converting to safety. He seems to be in the right place, and covering tight ends is a hell of a lot easier than covering Julio Jones. On one rep, Mills had blanket coverage on Zach Ertz. In the non-padded portion of practice, he had a one-handed pick of Wentz.

• Sidney Jones missed his fourth practice of camp. Prior to camp, Schwartz said the outside starting corner job opposite Slay was an open competition between Jones and Avonte Maddox. (Narrator: It wasn't.)

Still, Schwartz was asked if Jones was still in the hunt in that "competition," or if he was running out of time.

Translation: "Trade him for literally anything."

• As we mentioned in yesterday's notes, Togiai's chances of making the roster rose when Josh Perkins was listed as "out indefinitely." He had a TD reception in the red zone today.