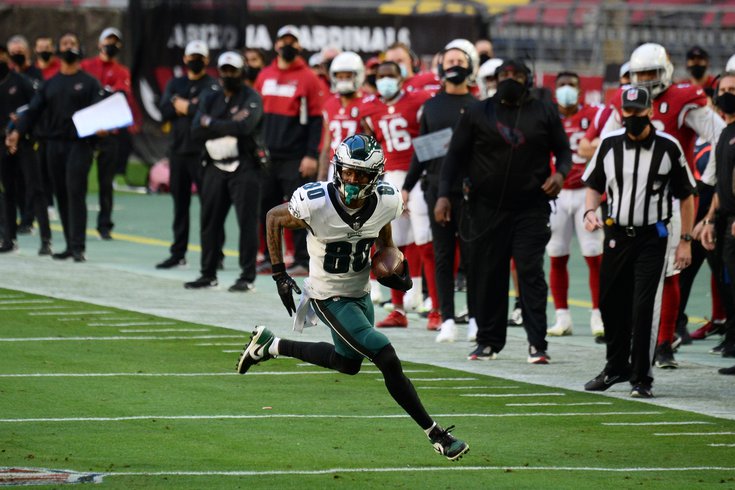 During the offseason, we'll be taking a look at a handful of players who are either new to the Philadelphia Eagles, or are already with the team but we perhaps don't know a lot about them just yet. Today we'll take a look at 2020 sixth-round pick Quez Watkins.

After a good training camp, Watkins' season got off to a slow start, when he landed on injured reserve. He stayed there for the first four weeks, and when he returned he only played 20 snaps in two games, before disappearing again (mostly on the inactive list each week) until the final quarter of the season. A snapshot of his 2020 season snap counts:

Watkins did not see a target come his way until Week 14, against the Saints, and even that "target" was essentially a handoff on a jet sweep. It wasn't until Week 15 that Watkins had a memorable moment, when he caught a screen pass, spun to the outside, and took it to the house.

On the season, Watkins had 7 catches, officially on 13 targets (one was actually an incompletion to Greg Ward) for 106 yards (15.1 YPC), and 1 TD. He also got open in the end zone on the *controversial fourth down call from the Football Team 4 yard line in the tank game, but Jalen Hurts threw an inaccurate pass.

*It really wasn't controversial. Doug Pederson went for it plenty of times in similar situations throughout his coaching career in Philly.

Here are all of Watkins' targets on the 2020 season:

As you can see in that video, Watkins' touchdown was eye-opening, and he impressed Aqib Talib (the commentator for that game) with his speed, though the majority of his catches (and targets) were either on screens or off-schedule plays. I did like the route he ran on the second-to-last target of the season in the video above, in which he had a stutter step at the beginning of his route, took Kendall Fuller vertical, before breaking off an out route and getting open. Nate Sudfeld misfired on his throw, which glanced off of Watkins' fingertips.

I took a look at all of Watkins' snaps against the Cardinals and Football Team (the games he played in the most), and came away with the following takeaways:

• In 2020, Watkins played some at the X, Z, and slot, but mostly at the Z. In the new offensive scheme, Eagles receivers will be expected to play every position, per Nick Sirianni, though Watkins is best suited for the Z position, in my opinion.

• Against off coverage, he eats up cushions very quickly, and can be a real threat as a deep receiver, or on in- or out-breaking routes once he has sold the deep route. The Eagles have four receivers on the roster with legitimate speed and deep ball potential in Watkins, DeVonta Smith, Jalen Reagor, and John Hightower. In theory, the Eagles should be able to generate 2-on-1 scenarios deep down the field against zone coverage with all that speed. To be determined if Sirianni can unlock that potential within his offense.

• Against press, if the corner is able to get hands on Watkins, it's going to slow him up and affect the timing of his route. He needs to beat corners cleanly off the line of scrimmage in press, because he did not display the ability to match physicality of aggressive corners. That area of his game will need to improve. He should not be asked to play the X position anytime soon.

• As a blocker, his effort was fine, but corners still pretty easily shed his blocks.

Watkins has 4.35 speed, and he is going to be given plenty of opportunities to make the roster. He showed some real juice against the Cardinals last season, and could benefit from an offensive scheme that can put the ball in his hands with the chance to create after the catch. In theory, his speed should also make him a deep threat, but Watkins did not get any targets on vertical routes down the field in 2020, aside from one catch against Dallas on an off-schedule play. That feels odd, considering Hightower got his share of shots down the field.

One other notable fact is that Watkins played zero special teams snaps in 2020, and as such, his roster spot in 2021 is not guaranteed. He's going to have to make the roster by being better than some of the other young receivers on the roster. His biggest competition in camp is probably Hightower, who possesses a similar skill set, and who also did not contribute on special teams at all in 2020.