A closer look at the Eagles' football operations changes 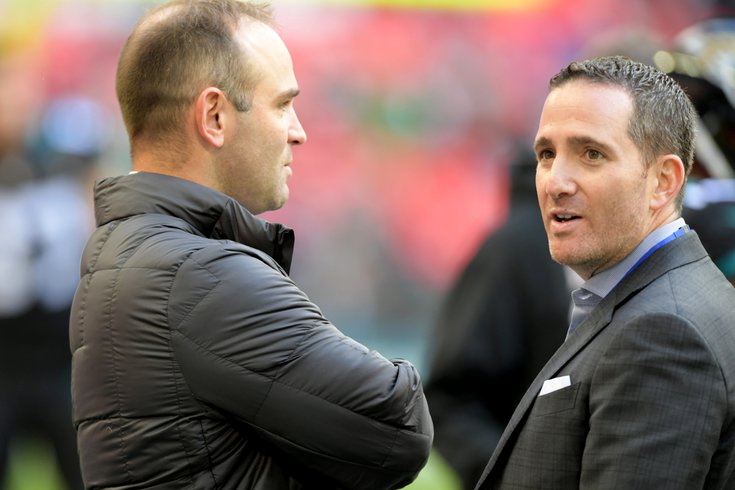 On Thursday, the Philadelphia Eagles announced 10 changes to their football operations department. Those changes are as follows, in alphabetical order.

The most noteworthy of the changes above are Brown, Caldwell, Cunningham, Raiche, and Soliman.

According to the team's website, Raîche "will be involved in all areas of football operations and player personnel, including pro and college scouting, contract management, player/staff development, and football research." She has an interesting background, as she is originally from Montreal, getting her start in the CFL, and holding the title of Assistant GM for the Toronto Argonauts.

Raîche' promotion to this position makes her the highest-ranking female personnel executive in NFL history, at just 32 years of age. The Eagles said they will be making Raîche available to the media at some point.

If Howie Roseman is at the top of the scouting department food chain, and Andy Weidl the No. 2 guy, consider Brown and Cunningham – who are both thought to be rising stars – as the next two guys in line.

In recent years, the Eagles have brought in past GMs to consult for the team, like John Dorsey and Scot McCloughan, who really did little more than write occasional reports on players or prospects. With the Eagles, Caldwell's job was described by the Eagles on the website like so:

"In his role as a Personnel Executive, Caldwell will contribute to the evaluation of the Eagles team, while also assisting with both the pro and college scouting process."

When asked why he felt confident in Howie Roseman as the leader of the team's football operations in back in January, Jeffrey Lurie cited this type of hiring.

"First of all, it's the people that he surrounds himself with," Lurie said. "We're only as good as the people we surround ourselves with. It's easy to talk about the quarterback and the head coach and the GM, but honestly, we're a product of those that surround us.

"I see the people that Howie has attracted to our organization. I think the last two major GM searches have all been raiding our organizations, for whether it's Joe Douglas or Andrew Barry. We have about five people in our organization that right now I could project that will be general managers in this league, and he continually replenishes, whether it's a John Dorsey or Jeremiah Washburn, or the list goes on. I don't want to leave anybody out.

"But we have a real strong nucleus with Andy Weidl, Ian Cunningham, Catherine Raîche, Brandon Brown. One of the jobs of the general manager is to attract really good people and executives around him because it's not meant for one person."

If these types of hires impress the big boss, just keeping making them, I guess?

Soliman went from Player Personnel Intern in 2018, to Player Personnel Coordinator from 2019-20, now to Pro Scout. It was also revealed a few weeks ago that Soliman (along with Raîche) coordinated a networking organization for women working in operations departments around the NFL.

Ameena Soliman (@meen_mill), player personnel coordinator for the @Eagles, has initiated an @NFL-wide networking organization for women working on the league's operations side.

And finally, before there was OverTheCap.com, Johnston ran a website called EaglesCap.com, which was an outstanding salary cap resource for Eagles fans, before they widely existed. Johnston initially joined the team as an intern in 2016, and has now been promoted three times.