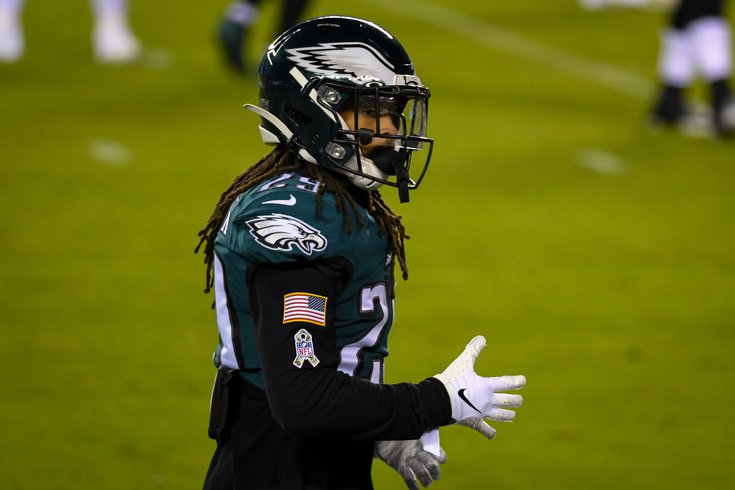 Avonte Maddox during the Philadelphia Eagles game against the Dallas Cowboys at Lincoln Financial Field in Philadelphia on November 1, 2020.

Darius Slay's absence from voluntary work on Tuesday of this week only highlighted the Eagles' biggest flaw.

Peering through the binoculars to the far field at the NovaCare Complex, the man leading the individual drills at cornerback in a gray-colored "Shirsey" wore No. 29.

For one day in May at least [Slay was back in the mix by Wednesday], the 5-foot-9, 25-year-old Avonte Maddox was the lead dog in a position group rife with uncertainty.

As the calendar speeds toward June 1, the assumption is that the Eagles will potentially get in the mix for Steven Nelson or Bashaud Breeland. Maybe Howie Roseman can’t offer the most money but he can dangle the clearest path to significant playing time.

For now, Maddox remains one of the most important defensive players on this team while entering a contract year.

A stellar outside CB in college at Pitt, the old defensive coaching staff rolled the dice on Maddox being able to handle work outside the numbers on the professional level in 2020 despite the obvious lack of length.

“I grew up admiring the Darrell Greens and Aaron Glenns of the world, and these guys, they’re explosive, twitched-up guys who had an incredible vertical, and it’s hard to get the ball on them,” Roseman said. “Avonte’s got a lot of those same characteristics.”

Maddox was graded dead last among NFL CBs — No. 121 of 121 — by ProFootballFocus.com. The run support grade (No. 103 of 118) was slightly better than the coverage grade (No. 117 of 119) but both were near the bottom of the league. He also missed six games to ankle and knee injuries and no one was coming out of 2020 thinking about Glenn never mind Green.

To date the Eagles haven't been able to add much to the CB position as a whole, eschewing it in free agency so far and failing to address it in the draft until the fourth round with Texas Tech product Zech McPhearson, a Penn State transfer. A minor trade brought 2020 Jaguars' fourth-round pick Josiah Scott, a near clone of Maddox from a physical perspective, into the mix as well.

For now, the plan is to run it back with Slay and Maddox manning the outside. If that's going to work, Maddox must improve significantly and pointed to the most obvious step in that process.

New secondary coach Dennard Wilson and his assistant, D.K. McDonald, stress being disciplined with the eyes to all of their students, something that will take any CB where he needs to be on the field.

“You get your eyes in the right spot, you can’t be beaten,” said Maddox. “You won’t be missing out on big plays you can make. That’s one thing I tell myself, I probably write it down in my book every day: eyes, eyes, eyes. I go out in the field, eyes, eyes, eyes.”

The foundation as a coach for Jonathan Gannon, the new Eagles defensive coordinator, is cornerbacks and Gannon’s got a reputation of coaching up players in the past to make them greater than the sum of their skill sets.

Everything remains a work in progress at this point in a room that also includes unfamiliar names like Craig James, Mike Jacquet, Kevon Seymour, Nate Meadors, Shakial Taylor, and Lavert Hill.

“I see a bunch of great-looking guys that are ready to go out there and compete, work hard, compete with each other, hold each other accountable,” Maddox joked. “This back end is good. And we still have guys in here… I’m rocking with whoever we have in there and whoever we bring in. I’m happy for it, I’m ready for it. I’m ready to teach it.”

Where Maddox fits into the puzzle — it could be outside CB, the slot, or even free safety at times — is still up in the air.

“I don’t know,” Maddox admitted. “Wherever I’m needed, I’m always willing to play outside, inside, back end, that’s why I say [Gannon's] schemes are great. ... I want to learn everything."

The Eagles would settle for learning one thing and excelling at it.

“My confidence is sky high," Maddox insisted. "Stepping on and off the field no matter what anyone says to me. I’m going to make sure I can be the best player I can be and if I’m not doing as well, I’m going to hold myself accountable and I expect everyone else to hold me accountable for it as well."


John McMullen is the NFL Insider for JAKIB Media and the co-host of ‘Birds 365’ on PhillyVoice.com. He’s also the host of “Extending the Play” and an on-air contributor on AM1490 in South Jersey and contributes Eagles and NFL coverage for SI.com. You can reach him at jmcmullen44@gmail.com

Make sure you follow the JAKIB Media Partners YouTube page for your daily “FootballFix,” the Eagles podcast that became an institution in South Jersey as the No. 1 local drive time segment in the market, plus on-demand access to BIRDS 365.