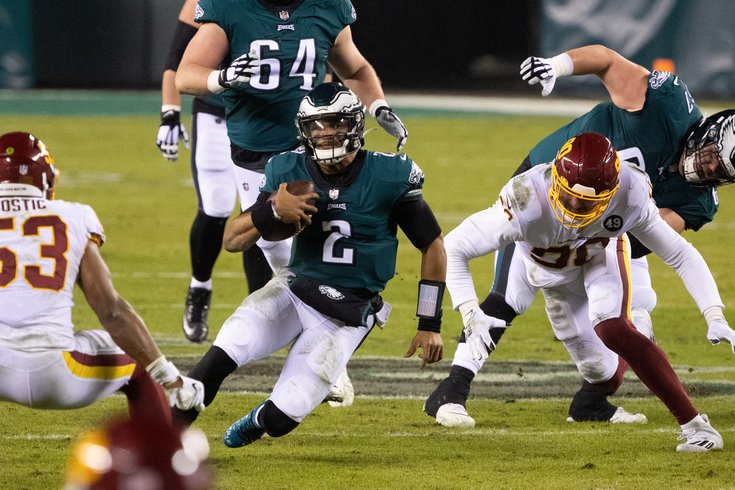 Here's where people around the country have the Eagles ranked after the 2021 NFL Draft. Oh, and here's our version of these sellout rankings, too.

The Eagles not only passed on opportunities to select Ohio State's Justin Fields and Alabama's Mac Jones, but did not use any of their nine draft picks on a quarterback. Instead, they reunited Hurts with a pair of fellow Alabama alums by taking wide receiver DeVonta Smith and offensive lineman Landon Dickerson in the first two rounds, then added do-it-all running back Kenneth Gainwell in the fifth. This will be Hurts' show barring a late blockbuster trade, and he's now set up pretty well for it.

#JimmySays: I do think there's a point to be made that there shouldn't be any false evaluations of Hurts this season. Assuming the team has better injury luck in 2021, he'll be playing behind a very good line, with a good running back, a good tight end, and an improved wide receiving corps.

To land Alabama stud DeVonta Smith in the first round? Beautiful. To trade in front of the hated Giants, who also coveted the Heisman Trophy winner? Well ... that's ecstasy. The Eagles have struggled to identify talent at wideout in recent years, but Smith profiles close to a can't-miss, and he fills a significant area of need as the Eagles look to see what they have in second-year quarterback Jalen Hurts﻿. We also love the Day 2 pick of Landon Dickerson, an All-American center at Alabama who fell out of the first round because of medical red flags. Philly is going to love Dickerson if he can stay healthy.

#JimmySays: If Dickerson is Kelce's heir apparent at center, at 6'6, 333 pounds, he is going to look notably different than the 6'3, 295-pound Kelce. Watching the Eagles' first practice of the season on Tuesday, one of the easy observations to be made is that Dickerson is a monster.

This season falls under the category of a classic rebuilding year. The coach and quarterback who were the foundational long-term pieces of the team just nine months ago are gone, and Nick Sirianni and Jalen Hurts are in their places—for now. Come to think of it, that’s the most shocking thing that’s happened in the NFL in the last year. Sirianni and Hurts in, Doug Pederson and Carson Wentz out is, well, it’s more shocking than Tom Brady leading the Bucs to a world championship. The Eagles should have three first-round picks to replace Hurts if need be next April. But for the time being, Hurts will have his chance to be the Dak Prescott of the Eagles, the guy drafted as insurance but who took the job for himself and wouldn’t let it go. GM Howie Roseman did Hurts a favor by drafting his old friend from Alabama, Devonta Smith. I think Smith will be good in the NFL—he’s a competitive player who wins more 50-50 balls than a 6-0, 170-pound sprightly receiver should—and, as importantly, he won’t be cowed by the toughest fan base in the league. I think he’ll play to it and love it. But the Eagles have some long-term problems, like the state of an aging offensive line, and some significant age on the defensive front. I do like the Ryan Kerrigan addition, at least for one bridge year. A bridge year, the Eagles hope, to a brighter future after an offseason of mayhem.

#JimmySays: Yes, it's perhaps the toughest fan base in the league, but they're also over the top in their love of good players who play hard. It works both ways.

The Eagles were probably the 2020 season’s most unexpected disaster. Now that they’re in unfamiliar territory down at No. 29, 2021 will likely go a long way in telling us how big of a project this will require to get them back toward the top of the NFC.

From rookie head coach Nick Sirianni's bizarre press conferences to senior director of player personnel Tom Donahoe's draft room dourness, it's just hard not to get the vibe that Philly fans should start thinking about the 2022 season. (But enjoy rookie WR DeVonta Smith in the interim.)

#JimmySays: Eagles fans should indeed be thinking about 2022, but not for the idiotic reasons given here.

The Philadelphia Eagles addressed one of their biggest needs in the first round of the 2021 draft with the addition of Heisman Trophy-winning wide receiver DeVonta Smith.

But adding one wideout—even one as talented as Smith—won't fix all that ails this team.

Quarterback Jalen Hurts showed some flashes down the stretch as a rookie, but he is far from a sure thing. Even with Smith in the fold, the Eagles have the weakest assemblage of passing-game weapons in the NFC East. An offensive line that once was a strength for the team has shown cracks as of late, too.

The secondary also remains a mess. Veteran Darius Slay struggled mightily in 2020, and the depth chart behind him leaves much to be desired. The addition of veteran linebacker Eric Wilson should help the second level of the defense, but it is otherwise a potential weak spot.

Three years ago, confetti was raining down on the Eagles after a win in Super Bowl LII. But the 2021 iteration of the team is more likely to finish last in the NFC (L)East than first.

#JimmySays: I can't say I disagree with anything here.

Jalen Hurts takes over as the quarterback now with the trade of Carson Wentz. They added a nice weapon for him in receiver DeVonta Smith in the first round of the draft. But there are a lot of questions at other spots.

#JimmySays: Thanks as always for the bangin' analysis, CBS.

The Eagles like what they have in Jalen Hurts and Nick Sirianni's rookie direction as head coach should give them a spark, too. They will hope to have better luck fighting age and injuries, but being caught between contending and rebuilding is a tough spot.

Average ranking from the eight publications above: 27th.