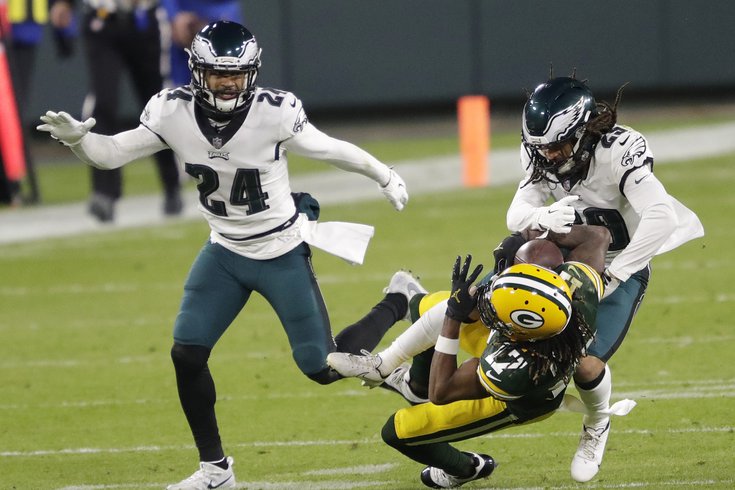 The Eagles don't have much at cornerback beyond Darius Slay and Avonte Maddox.

You can talk yourselves into many things when it comes to the NFL, especially in the offseason before the authenticity of game action evaporates any narrative other than reality.

Your favorite team might be good. They might be bad. Or it might be somewhere in between, where there are more than a few shades of gray baked into all the delineations.

Even NFL executives and coaches can convince themselves something is there if they really want to.

For now, it looks like the new defensive coordinator in town, Jonathan Gannon, is trying to visualize the Eagles’ cornerback position into competency.

Overall, Philadelphia might have the most uncertainty of any team in the NFL. Nationally, very little is expected of a team coming off a four-win season before shifting toward the transition of a rookie head coach and a second-year quarterback with all of four career starts under his belt.

The oddsmakers have generally placed the Eagles’ over/under for wins at 6 or 6.5, with the over shaping up as easy money for the locals who believe those outdated strengths of schedule charts (don’t) and that Nick Sirianni and Jalen Hurts aren’t starring in the remake of “Dumb and Dumber” (do).

For me, the over is easy if the offensive line stays healthy and plays together for the majority of the sked, admittedly a very big "if" considering the recent injury history of Brandon Brooks and Lane Johnson.

“I think [Hurts has] got a better team around him than other people do,” former NFL offensive lineman Ross Tucker told me on BIRDS365, which streams live on PhillyVoice.com each morning. “I mean, look at the offensive line, if Brandon and Lane are healthy, it’s a top-10 line all day.”

SIRIUSXM host Alex Marvez noted that the NFC East is still considered weak as a whole and pointed to the Eagles’ 32nd-ranked SOS as reasons to smile, but also laid out the national perspective and the fact that outside of Philadelphia the Eagles are looked upon as the gimme on the schedule by opposing fanbases.

The one thing everyone agrees on, except maybe Gannon, is that the Eagles need another outside CB opposite Darius Slay.

“I'm very comfortable with that [cornerback] room right now,” said Gannon, who met with reporters last week for the first time since he was hired in January.

J.G., as Gannon likes to be called, wasn’t about to throw the players he does have under the bus in May and it’s hard to imagine that Howie Roseman isn’t looking at an upgrade, perhaps post-June 1 when he gets a bit of salary-cap relief from the prior decisions on Alshon Jeffery and Malik Jackson and a potential long-awaited move involving Zach Ertz.

“I know in 2017 that we needed a corner too,” GM Howie Roseman said after the draft. “And we got to August and we had a preseason game in Green Bay, Wisconsin and we made a trade with the Buffalo Bills and got a corner [Ronald Darby] that helped us win a Super Bowl.”

Roseman already made a deal last week, acquiring Josiah Scott, a 2020 fourth-round pick who projects in the slot, from Jacksonville, for CB Jameson Houston and a 2023 sixth-round pick.

If the Eagles were forced to play today, it’s more than likely that the 5-foot-9 Avonte Maddox would get another opportunity at the outside corner opposite Slay for two reasons: he has the most experience and Maddox played well outside the numbers in college at Pitt before struggling in his first extended opportunity to do it at the professional level last season.

From there it’s like the Eagles as a whole, a lot of that uncertainty with rookie Zech McPhearson, Mike Jacquet, Kevon Seymour, Lavert Hill, Shakial Taylor, and the recently acquired Scott, a near clone of Maddox from a physical perspective.

With Maddox, Scott and McPhearson probably all better suited for inside work, you get the feeling that Gannon, whose expertise is with cornerbacks, can cobble things together there.

“I love the youth because it's like you can mold them how you want to mold them,” the optimistic defensive coordinator said.

Gannon compared his current situation to CB to his time in Indianapolis tutoring defensive backs for DC Matt Eberflus.

“When I got to Indy, we had a bunch of young guys,” said Gannon. “It was awesome. It makes the job super fun because certain guys, certain vets — not all of them, but certain vets — kind of stuck in their ways of, hey, I want to play this way.

“Well, if that's not the best thing for the defense, we don't want you to play that way. So I think for our guys, they've done a good job of understanding the why behind what we're doing to help those guys play.”

With Gannon now handling the entire defense, he’ll rely on Dennard Wilson and D.K. McDonald to handle the day-to-day work of working with the young players when it comes to technique and fundamentals.

“I've learned a ton from those guys in the last few months,” said Gannon of his assistants. “It's been awesome. So very comfortable with that room. Excited to see them get out there and compete. I think Slay can go to another level. I think everybody in that room can elevate their game and play winning football for us.”

There are also two ways any uncertainty can turn.

"We've only been three days on the grass, but in the meetings, it's been a really cool thing to see those guys, you know, when you show them on tape, here's how we can play this way, we can play this way,” Gannon said. “It creates a lot of enthusiasm and confidence with your guys.”

When the pads are added to the grass time this August don’t be surprised if another body has been added, either along the way or in a last-minute fashion.

“We've had experiences about getting guys late in the process,” Roseman insisted. “… I promise the fans we'll do whatever it takes at any time of the year to improve the roster.”

John McMullen is the NFL Insider for JAKIB Media and the co-host of ‘Birds 365’ on PhillyVoice.com. He’s also the host of “Extending the Play” and an on-air contributor on AM1490 in South Jersey and contributes Eagles and NFL coverage for SI.com. You can reach him at jmcmullen44@gmail.com

Make sure you follow the JAKIB Media Partners YouTube page for your daily “FootballFix,” the Eagles podcast that became an institution in South Jersey as the No. 1 local drive time segment in the market, plus on-demand access to BIRDS 365.