Where are the Eagles deep, and not so deep, after the 2021 NFL Draft: Offense edition 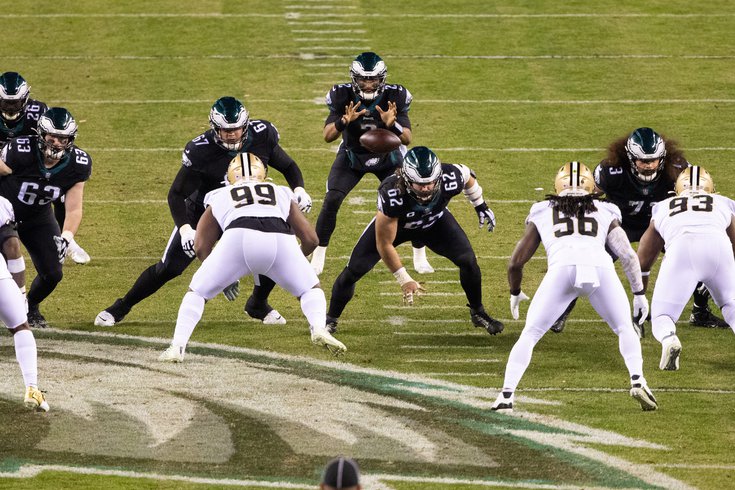 Here is a generic picture of the Eagles' offense.

While the Philadelphia Eagles could still add a veteran here or there to their roster before the start of the season, particularly at cornerback, it is still probably somewhere around 90-to-95 percent set. Here we'll take a look at each of their positions, and determine where they are strong, and where they still need help, starting with the offense.

Read any offseason ranking of NFL starting quarterbacks, and you're going to find that Hurts will consistently land in the bottom five. In case you missed our in-depth review of Hurts' 2020 season, you can find that here. The short-short version is that while Hurts has intriguing intangibles and running ability, he has a long way to go as a passer, particularly with his accuracy.

The Eagles have been stockpiling picks in the 2022 NFL Draft, and should be in a position to land either a top prospect or a big-name veteran at that time with their draft capital. Couple that with the easy observation that the Eagles have not thrown their full support behind Hurts this offseason (not naming him the starter, curiously omitting him from marketing materials, etc.), and one might come to the conclusion that even the Eagles themselves do not think that he is the answer.

Should Hurts go down, it'll be Flacco time. Flacco was painful to watch with the Jets last season.

Are the Eagles in good shape here relative to the rest of the league? I suppose there's an argument to be made that they're better off than some teams out there that (a) don't have a quarterback capable of making a Super Bowl run, and (b) won't have a lot of flexibility in finding one next year. At least the Eagles have the latter. And for now, they'll get a look at Hurts in a season in which they're unlikely to contend for a Super Bowl. If he is a pleasant surprise, then great. If not, they can be guided accordingly.

But clearly, as the roster stands this offseason, no, they are not in good shape relative to the rest of the league at quarterback.

Sanders' career has been interesting through his first two seasons in the league. He entered the NFL as a rookie in 2019 with concerns over his ability to pass protect, catch the football, and hold onto the football, as in, not fumble it away. There were no such concerns about him running with the ball. As it turned out, he struggled as a runner early that season, but was better than expected in the three concern areas.

In 2020, he was great as a runner, but was downright bad as a receiver and in pass protection. Oh, and he fumbled four times.

Sanders impressed me as a rookie, when he acknowledged his struggles as a runner, and then successfully worked toward making corrections. He is not a player who believes he is infallible, and is realistic about the quality of his play. That gives me reason to believe he can make the corrections necessary to become the upper-echelon back that many of us thought he might be in 2020. Obviously, he has talent.

As for the rest, it's a nice group of backups. Scott is effective in the screen game, so if the Eagles can fix that aspect of the offense under Nick Sirianni, he can perhaps flourish in that role again. Gainwell should contribute immediately as a third-down type, and veterans like Johnson and Howard can battle it out for the fourth running back spot.

Are the Eagles in good shape here relative to the rest of the league? Yes. Sanders aside, the Eagles lack a between-the-tackles banger with fresh legs, but it's a group with skills, with some nice depth.

With the addition of Smith, the Eagles' wide receiver group looks better than it did this time last year (duh), when DeSean Jackson was probably the "No. 1 wide receiver." He could be a star player. We'll see.

Otherwise, the Eagles need Reagor to step up bigly in Year 2, and for someone step emerge and unseat Greg Ward as the third WR option in the passing game, with Fulgham being the best candidate.

Are the Eagles in good shape here relative to the rest of the league? There aren't many teams in the NFL that would trade their set of wide receivers for the Eagles'. Even with the juice and excitement that Smith will bring to the offense, this is still probably a bottom five group on paper.

The Eagles' tight end spot remains unsettled. The expectation remains that the Eagles will trade or release Zach Ertz sometime after June 1, and that they will subsequently add a veteran to the roster, like Rodgers.

Goedert is a good, complete tight end, but he has not yet broken out and had a big season from start to finish. The guys behind him are fringe roster guys like Wilson and Croom, or lottery tickets like Butler and Jackson.

Are the Eagles in good shape here relative to the rest of the league? Goedert is safely a top 10 NFL tight end, but there's no depth whatsoever behind him, again, assuming Ertz is a goner.

The health of the Eagles' offensive line could help decide if the team exceeds expectations in 2021. If Johnson's ankle can hold up, and if Brooks can make another successful recovery from an Achilles tear, and if Kelce can continue to play at a high level at his age, and if Mailata can continue to improve or Dillard can emerge from his current bust status, and if Dickerson can recover from his ACL and be a positive contributor as a rookie, then the O-line can carry the offense. Obviously, there are no shortage of "if's."

Are the Eagles in good shape here relative to the rest of the league? There are a lot of teams with major offensive line issues, so yes, even with an aging group of players coming off a barrage of injuries in 2020, the Eagles have an enviable offensive line, comparatively speaking.