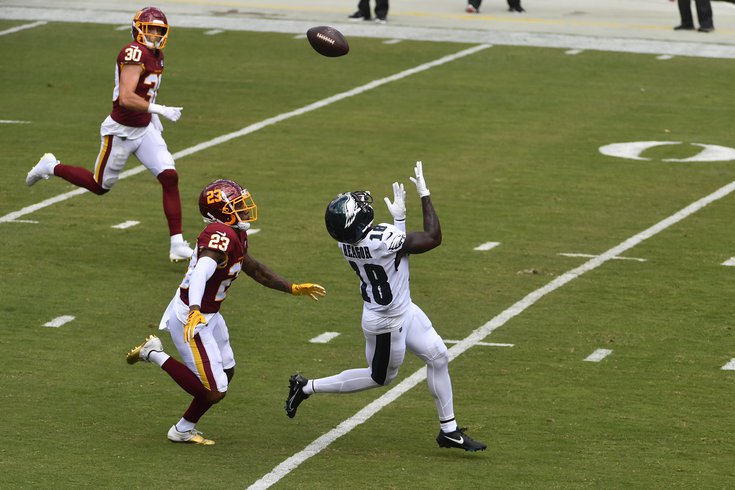 I should note that I'm on a bit of a mini-vacation (friend's wedding), and your focus today should be on the Sixers anyway (read Kyle's Sixers-Wizards preview here), so this will be a brief mailbag.

Question from Flipadelphia: How much of Jalen Reagor's success this year do you think depends on DeVonta Smith's performance? I feel like Reagor was over-drafted last year (like many) so he has felt immense pressure, but I feel he should fit in the No. 2 receiver role very well.

Coming out of college, Reagor was not super polished as a route runner, so that was always going to take some time, but I think that he did show some ability as a rookie. He also missed five games during the early part of the season (Weeks 3-7), and he returned to a stagnant offense with a quarterback playing poorly. So I think his disappointing rookie season had more to do with all of that more than the outside pressure, though it probably didn't help that people reminded him every day that Justin Jefferson was crushing it in Minnesota.

I do believe you may be right that Smith's presence will take some attention away, and perhaps Reagor can stop paying attention to social media, and just play. That would help, if he can do that. He would be smart to take a long hiatus from Twitter, in my opinion. But more importantly, I think that if he can stay healthy, and the scheme can put his skill set in a better position to succeed, then yes, he'll improve in Year 2 (a low bar), with a chance of becoming a good No. 2.

Question from Scojos: It feels like Trevon Grimes is a strong bet for this year’s Na Brown Award. Who else do you have your eye on?

If you aren't familiar with the yearly "Na Brown Award," it is the title awarded to the Eagles player who comes out of almost nowhere to cause a big stir at camp and raises his expectations unreasonably high in the process. Back in the early Donovan McNabb days, Na Brown was a camp stud who got a lot of hype but ultimately failed to live up to his heightened expectations.

I feel like Tyree Jackson, the converted quarterback who is now a tight end, has an interesting enough backstory and at 6'7, 249, you kinda can't miss him, so he's ripe for hype.

Question from Jenga Man: Who has a potentially more promising career at TE: Tim Tebow or J.J. Arcega-Whiteside?

Ha, I really do think they should give J.J. a look there. He's a willing and seemingly able blocker, at least against defensive backs, though he wouldn't fare too well against NFL defensive ends. Don't do it in 2022 after another failed season at receiver, when he'll have no chance at all to actually impress at a new position. Let him give it a go now, while there are a lot of bodies at wide receiver, and not as many at tight end.

As for Tebow, we've seen this tight end show before.

Question from Kimmy Jempski: I want to buy a new jersey. Last year I was about to buy a Wentz jersey, but thankfully dodged that bullet. I want you to give me a recommendation, I'm looking at the younger players that will be here in the next 5-8 years and obviously will be good. So who would you choose?

For those of you looking to get long-term bang for the buck on jersey purchases, there aren't many options. A while back we looked at which player would likely be the last man standing from the Super Bowl roster, and we landed on Rick Lovato, with Isaac Seumalo being second behind him.

In terms of the young players drafted since the Super Bowl, once again, there aren't many good options.

• Jordan Mailata, Josh Sweat, and Dallas Goedert are all in contract years, so they're all a little too dicey, for now.

• Miles Sanders is a good player, and I think he'll bounce back from his receiving and pass pro struggles last year. You'll get at least two years out of him, presumably, but a debate lies on the horizon about whether the Eagles will want to pay him on a second contract.

• Jalen Hurts will start this year, but on a tryout basis.

• Jalen Reagor hasn't been good enough yet to warrant a jersey purchase.

For me, the choice here is pretty simple. Just go all-in on DeVonta Smith. It's a little risky in that he could bust, but I don't see that. He's too good to just outright bust, plus he has a single-digit number in the first year receivers are allowed to have them.

Question from Ryan: Which road game are you most looking forward to for the press box food spread ratings?

Dallas is always top notch, and Atlanta was excellent when we went there in 2019. I'm curious to see how the Raiders fare. The press box food spreads were largely awful in 2020, because of COVID. They were mostly pre-prepped boxed lunches.

Actually, that reminds me that I have to sort of put a bow on my 2020-2021 press box food reviews, because I stopped updating them after I stopped traveling to games during a COVID spike in December. The one good thing the Eagles did last year was that they were clearly the No. 1 press box food spread provider among the games I attended.