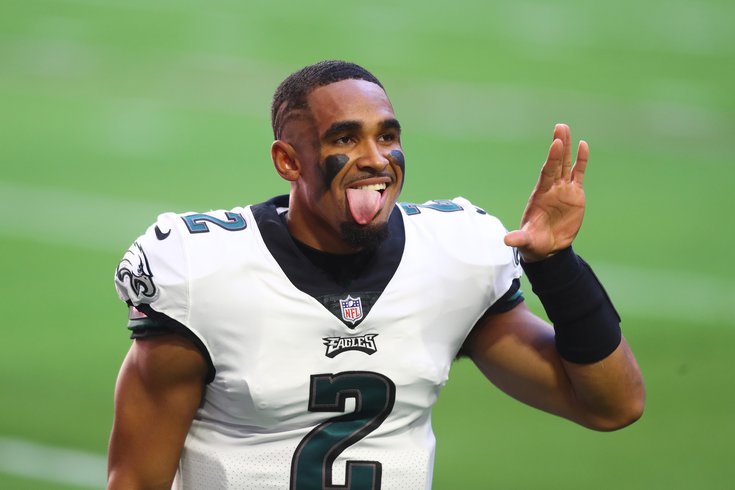 Will Jalen Hurts be the Philadelphia Eagles starting quarterback next season?

If the 2021 NFL offseason has taught us anything, it’s that the modern NFL quarterback has an entitlement problem.

Right here in Philadelphia, you already saw the denouement of a historic regression born from Carson Wentz’s shock that the Eagles took Jalen Hurts at No. 53 overall in the 2020 draft.

In Green Bay, you have a similar situation developing absent the on-field slide with league MVP Aaron Rodgers trying to force his way out with the selection of Jordan Love in the first round last year serving as the straw that broke the back of an already fractured relationship. Out in Seattle, success has tricked Russell Wilson into believing he should have a say in personnel, and long before any legal troubles and in between an alleged very busy schedule of booking appointments, Deshaun Watson somehow talked himself into self-appointed veto power of the new GM and coach.

With all that as a backdrop, it was refreshing to see the grounded Hurts take over the mantle as the Eagles’ on-field leader on Wednesday.

There was no formal ceremony. Heck, Nick Sirianni still won’t even admit that Hurts is his QB1, instead preaching a cliched-competition mantra that presumably would have you believe the aging Joe Flacco or undrafted rookie Jamie Newman each have a chance to be taking snaps Sept. 12 in Atlanta.

While Sirianni and the Eagles haven’t put the ring on Hurts' finger just yet they did trot him out in front of the parents as the main-event attraction on the Phase II OTA Zoom card which also included entrenched veterans Jason Kelce and Brandon Graham.

Yours truly was leading off and I wasn’t exactly Rickey Henderson but Hurts did open up a bit on his interim status, flashing the maturity that everyone who meets him raves about.

“I value everything coach [Sirianni] has brought here,” Hurts explained.

If anyone expected even a hint of a rattled young player upset at being strung along, they weren’t about to get it from a guy who already lost a high-profile competition on the college level with Tua Tagovailoa at Alabama.

In fact, the Eagles’ penciled-in No. 1 went back to his time in Tuscaloosa under legendary coach Nick Saban to explain his even-tempered personality and ability to avoid the Saban-coined “rat poison” of outside criticism and controversy.

“I remember back in my days at Alabama with Coach Saban hearing him talk about discipline, commitment, effort, toughness, and pride,” Hurts explained. “Having these core values he is trying to instill in the team.

“In the end. It all worked out for the team.“

It worked out for the team but not for Hurts, who had to take a different path, transferring to Oklahoma and excelling under QB King-maker Lincoln Riley.

A Heisman runner-up performance with the Sooners in 2019 spawned visions of Wilson for the Philadelphia brass, which selected Hurts at the behest of Jeffrey Lurie, the first domino in an avalanche that eventually had the Eagles owner rubber-stamping a nearly $34 million dead-money hit that shattered previous precedent just to get out of the Wentz business.

Few around the league believe the Eagles are jumping into the deep end of the pool with Hurts and are instead dipping their toes in and taking a wait-and-see approach. Every meaningless 2022 mock draft you see has the Eagles taking a QB and the specter of Watson is ever looming with the plugged-in like Jason La Canfora, Peter King, and Diana Russini continuing to fan the flames there.

In the midst of it all Hurts is like Leo DiCaprio’s Billy Costigan in “The Departed.” No matter the chaos going on around the signal caller his hand remains steady, at least to those of us on the outside, looking in.

Hurts sees Sirianni taking a similar path to Saban with the Eagles and sees nothing wrong with the process itself, the very antithesis of the modern, privileged QB.

“Coach Nick Sirianni is coming in and preaching connection, preaching accountability, competition, fundamentals, and football IQ,” said Hurts. “Preaching all these things and I know in all of those different avenues and principles that we are trying to instill here in Philly.

“Nobody is above that."

Tell that to Doug Pederson, Matt LaFleur, and Pete Carroll and you might get a chuckle.

But that’s always been Hurts’ makeup whether he was the guy at Alabama and Oklahoma or the backup to Tua and Wentz. The pulse never changes.

“Everybody’s got to go to work,” Hurts said. “For me, I know the rent is due every day."

Philadelphia chewed up and spit out its last tenant. The new one plans on staying awhile.

John McMullen is the NFL Insider for JAKIB Media, and the co-host of ‘Birds 365’ on PhillyVoice.com. He’s also the host of “Extending the Play” on AM1490 in South Jersey and contributes Eagles and NFL coverage for SI.com. You can reach him at jmcmullen44@gmail.com.