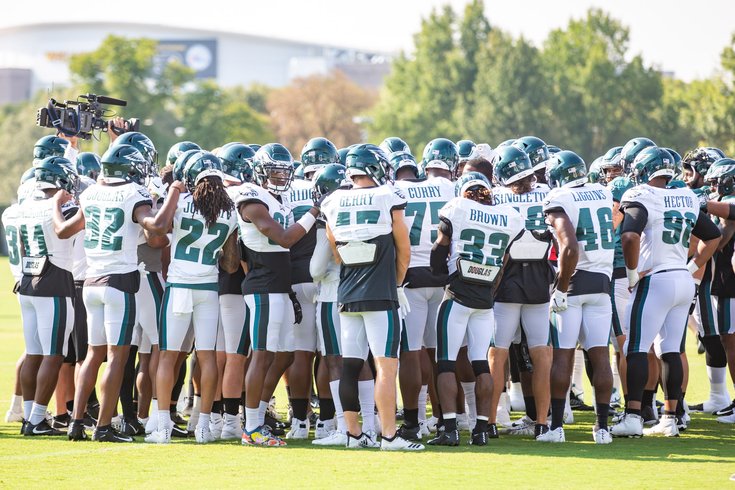 The Philadelphia Eagles have been busy over the last few days, signing former Washington Football Team edge rusher Ryan Kerrigan, and trading for slot corner Josiah Scott. There were a few other news items as well, which we'll round up here.

The Eagles — via Dave Spadaro — outlined an amended offseason schedule that was agreed upon by the players and the team, that will focus on conditioning as well as teaching/learning the new coaching staff's scheme.

This modified offseason schedule boils down to the following:

1. This week, the team is conducting Phase Two which includes meetings and on-field sessions geared toward fundamentals, schemes, and strength and conditioning.

2. The following two weeks will fall under Phase Three OTA rules designed to provide more time for players and coaches to work together on and off the field. On-field drills will closely mirror that of Phase Two. This year, there will be no 11-on-11 or 7-on-7 work.

3. Following these three weeks of practices, the Eagles' offseason program will conclude. The players will next convene for the start of Training Camp at the NovaCare Complex when permitted under the Collective Bargaining Agreement.

Eagles players had previously announced that they would be unified in skipping OTAs, though a mandatory three-day minicamp in June was unavoidable. Instead, the mandatory minicamp is canceled, and the players will attend OTAs, which will require their attendance for more days, but will not include hard practices.

This time last year, when OTAs and minicamps were being canceled, and when training camp was in doubt, it was pointed out that the Eagles were in a favorable position, in that they were returning their head coach, their defensive coordinator, and their quarterback for their fifth seasons with the team while the rest of the division had hired new staffs. The thinking was that the Eagles already had their schemes and philosophies in place, while the Cowboys, Giants, and Football Team would have to find ways to get their players up to speed in a shorter period of time than normal.

As it turned out, the Eagles stunk anyway, on their way to a 4-11-1 season, though there's still a logical argument to be made that it should have been a major advantage, which they squandered.

This year, of course, the Eagles are the team that has a new coaching staff, while the rest of the teams in the division won't have to scramble under duress like they did a season ago. However, the ability to have players live in person, learning the scheme, should make the transition to camp easier for the Eagles' coaching staff than it was for the other teams in the division in 2020.

Zach Ertz won't be there

According to Jeff McLane of the Inquirer, Zach Ertz won't be attending offseason activities.

Zach Ertz, understandably, wasn’t one of the #Eagles veterans to report today for the start of the voluntary Phase 2, a source said. He isn’t expected to report for the remainder of the offseason program or until his situation is resolved (read: he’s traded or released). https://t.co/ZxeVP5JzTD

As we've noted here all offseason, it's is extremely unlikely that Ertz will be with the Eagles this year. Nothing has changed on that front as far as I'm aware. The next date to watch is June 1, after which the Eagles can trade or cut Ertz and spread his dead money hit over this year and next year, instead of taking the full brunt of the penalty in 2021.

Eagles rookies got their jersey numbers

The rookies got their numbers last week, but I'll just chime in quickly on each of them, even if a little late:

• DeVonta Smith, 6. Yes. That's a nice round-ish number that'll help in not making him seem even skinnier than he already is. By that I mean that if he were No. 1, for example, it would further accentuate his rail-thin frame. Plus, the aesthetic appeal of just carrying his college number over into the pros is nice. 👍

• Landon Dickerson, 51. Hate it. I love it for an athletic ball-hawking linebacker, but not for a 6'6, 333-pound interior lineman. 51 would be OK for an athletic center, but it's out of place on a mauling, nasty bruiser. Perhaps he can switch to 69 if Matt Pryor doesn't make the team. 👎

• Milton Williams, 93. I've begun thinking about who I'm going to compare each of the rookies to in my "Eagles rookie comp" series, and Williams in a way reminds me of a more athletic Timmy Jernigan, so this number is apt. 👍

• Zech McPhearson, 27. It's absurd that the Eagles were so quick to give out Malcolm Jenkins' number, but for some reason Brent Celek's 87 is untouchable. It's a good number for McPhearson, but I'd love to know the Eagles' thought process on holding a player like Celek's numbers over Jenkins', when Jenkins was every bit as notable of a leader on the Super Bowl team, and a better player. 🤷‍♂️

• Kenny Gainwell, 14. Nope. 14 is bad for a running back, while 19, his preferred choice, would look fine. Gainwell is going to quietly resent J.J. Arcega-Whiteside throughout camp. 👎

• Tarron Jackson, 75. Jackson said he'd have preferred a number in the 90's, but I kinda like 75 for him. He's an undersized effort/motor guy, so I like the idea him being in a non-glamour pass rusher number. 75 is a lunch pail, blue collar number that suits his style of play. 👍

• JaCoby Stevens, 30. When you're the second-to-last guy drafted, you could probably do worse than 30, but obviously it's not a great number. 😐

• Patrick Johnson, 48. Unless you're a long snapper or a fullback, if the team gives you No. 48, you know you have an uphill climb to avoid landing on the practice squad. 😬