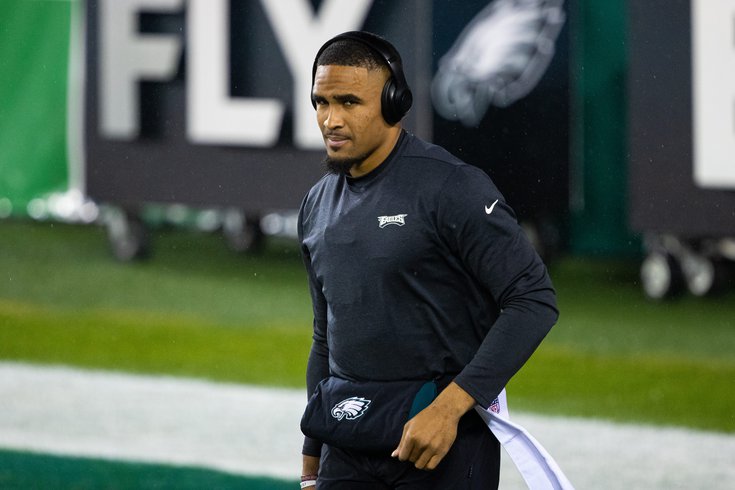 Nick Sirianni foreshadowed his own demise in Philadelphia after his first on-field practice with the Eagles' freshman, and a few assorted first-year and tryout players, at Friday's kickoff to rookie minicamp.

The legendary Bum Phillips once described a coach's life in a rather folksy way: "there's two kinds of coaches, 'dem that's fired and 'dem that's gonna be fired."

The Jeffrey Lurie era is pretty definitive with that and the scapegoating has only ramped up in recent years so Sirianni — like Ray Rhodes, Andy Reid, Chip Kelly, and Doug Pederson before him — is going to be fired at some point.

The trick is a long shelf life in between with loads of NFC Championship Game appearances like Reid or the best-case scenario, the Lombardi Trophy that Pederson gave Philadelphia.

Sirianni's self-reflective moment came in the midst of a barrage of questions on the status of Jalen Hurts and the failure of the organization to define the second-year quarterback as the guy.

The elephant in that room remains Deshaun Watson of course, a true superstar under the shadow of ugly sexual assault allegations in Houston.

Despite the significant hurdles Watson has to overcome to play anywhere in 2021 the Watson to the Eagles rumors continue to gain steam with ESPN's Dianna Russini the latest to join high-profile national reporters like Jason La Canfora and Peter King when connecting the dots.

Is Deshaun Watson to the #Eagles a possibility? @diannaESPN discussed... pic.twitter.com/CPqBpIYI37

"Trading [Watson] is on the table. They're open to it," Russini said of the Texans on 98.7 ESPN Radio. "I was on "Get Up" for three months saying it's not happening [...] They've changed their tune. I've heard, and even just continued talking with them, that it's still on the table. They've got to deal with these lawsuits, I think that's going to go away. And I think this is going to come back to light this summer, guys, and I think the Eagles could be a team in on it."

Sirianni was steered toward that thought in a lightly-veiled way.

Because Sirianni can't, we are going to make this as simple as possible for you. If Watson becomes a realistic scenario for the Eagles this organization will be in the mix with a lot of others to acquire the former Clemson star.

Lurie has already flashed his willingness to give second chances to players whether it's Michael Vick, Riley Cooper, or most recently DeSean Jackson. The talent vs. tolerance NFL equation is also in full effect as well with Watson being a potential top-five QB in this league and not a backup receiver. Finally, there is the football part of it which brings me to one of my favorite stories from my days in Minnesota.

Chester Taylor was a nice little three-down running back in 2006 coming off a 1,216-yard season and adding over 40 receptions out of the backfield. The position wasn't a need at the time for a Vikings team with many obvious ones yet Minnesota chose Adrian Peterson with the seventh overall pick in the 2007 draft.

The question was obvious to me at the time. 'You gotta pretty good RB why not fix something else?'

"F@#$, Chester Taylor," a personnel executive told me at the time.

The answer, by the way, was not a shot at Taylor. Minnesota really liked him as a player but the Vikings believed (and it turned out to be true) that Peterson was the best combination of speed and power at the position since Jim Brown and you don't pass on potential future Hall of Famers.

Hurts is now in that same position with the Eagles. The organization really likes him as a prospect but the four-letter word is being trotted out when and if Watson is a realistic end game.

That’s just life in the big city. … Life in the NFL.

"You guys won't leave this one alone, will you?" Sirianni joked as he continued to be pressed on Hurts. "... I mean, it's competition at every position. Competition is great. Competition elevates everybody's play. Everybody's play. If you come in and you have somebody that's competing with you every single day, it makes you better."

The problem with Sirianni's ‘golly, gee shucks’ act regarding his QB1 is that the competition mantra is hardly true in the moment for everyone so it comes across as somewhat disingenuous.

Stars and most entrenched starting QBs in this league are not competing for their jobs on a year-to-year basis but if you peel back the onion a little bit there is still some level of competition against expectation itself because the minute even the future Hall of Famer stops producing every organization is onto 'what's next?'

As for Hurts, it's a weird dynamic because the Eagles don't want to anoint a 2020 second-round pick with four career starts but the competition assembled is underwhelming: aging backup Joe Flacco and undrafted rookie Jamie Newman. More so, any declaration on Hurts on in mid-May is meaningless anyway.

If Hurts was named the starter on Friday and the door opens to get Watson, it doesn't prevent the Eagles from doing so. Conversely, pretending Flacco has a chance to earn the gig Week 1 in Atlanta is lip service.

Hurts is the Eagles' starting QB right up until he isn't.

"It'll be exciting to get on the field with him and see him do it physically."

John McMullen is the NFL Insider for JAKIB Media, and the co-host of ‘Birds 365’ on PhillyVoice.com. He’s also the host of “Extending the Play” on AM1490 in South Jersey and contributes Eagles and NFL coverage for SI.com. You can reach him at jmcmullen44@gmail.com.