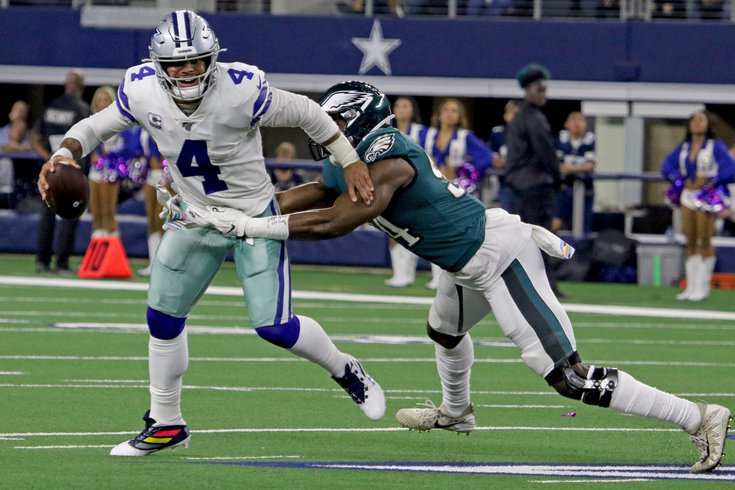 Even coming off a bad injury, Dak Prescott is still far above the rest of the quarterbacks in the NFC East.

If we're ranking quarterbacks league-wide, Prescott is probably somewhere in the 8-12 range, and yet, there's still a pretty large gap in between him and the rest of the quarterbacks in the NFC East, even with Prescott coming off a gruesome leg injury.

In the four full games he played in 2020, Prescott was averaging 422.5 passing yards per game. He had thrown 9 TDs vs. 3 INTs in those games, with 3 rushing TDs, almost single-handedly keeping them competitive.

This was a hard choice. The NFC East's backs are an interesting bunch.

• Barkley tore an ACL early in the season last year, and the Giants' owner recently said that Barkley might not be ready for Week 1.

• After heavy usage throughout his first five seasons in the NFL, Ezekiel Elliott has slowed down considerably, and does not look at all like the dynamic back he was early in his career.

• Miles Sanders was very good as a runner in 2020, but he struggled in pass protection, and catching the football.

• Antonio Gibson had a very good, productive rookie season, but I still would like to see more.

Ultimately, if given the choice between those four backs above for one season, I'll take my chances with Barkley's extreme talent.

Cooper has topped 1,100 yards in each of his two full seasons in Dallas, and he had 725 yards and 6 TDs in 9 games with them in 2018. He has become a consistent performer there.

McLaurin is quickly developing into one of the best receivers in the NFL. He has racked up over 2,000 receiving yards in his first two years in the league, even with crappy QB play.

Golladay was the Giants' high-priced free agent acquisition this year. He missed 11 games due to injury in 2020, but had 1,190 yards and a league-leading 11 touchdown receptions in 2019.

I gave strong consideration here to WFT's Logan Thomas, a college quarterback who converted to tight end, who didn't do much of anything over the first four years of his NFL career, and then broke out in 2020, catching 72 passes for 670 yards and 6 TDs.

Goedert is still probably the better, more complete tight end, and his 2020 numbers (46-524-3) were hurt by injuries and an awful Eagles offense.

The Cowboys' Dalton Schultz probably deserves a quick mention here, too. He unexpectedly had a decent season (63-615-4) in 2020. I did not consider drop machine Evan Engram.

Both Smith and Johnson are clearly the best offensive tackles in this division, though they both also are becoming durability concerns later in their careers. Still, they're in their own class in the NFC East.

At guard, while Brandon Brooks was better then Scherff the last we saw him and arguably better than Martin as well, he has had three major injuries the last three seasons, including a pair of torn Achilles. Also, yes, I realize Martin and Scherff both play RG. It's silly to put some average LG in there instead of one of those guys.

Kelce remains the best center in the division.