Jalen Hurts is the Eagles starting QB, even if Nick Sirianni won't admit it yet

Don't buy the 'competition' at quarterback, no matter how hard the team tries to sell it 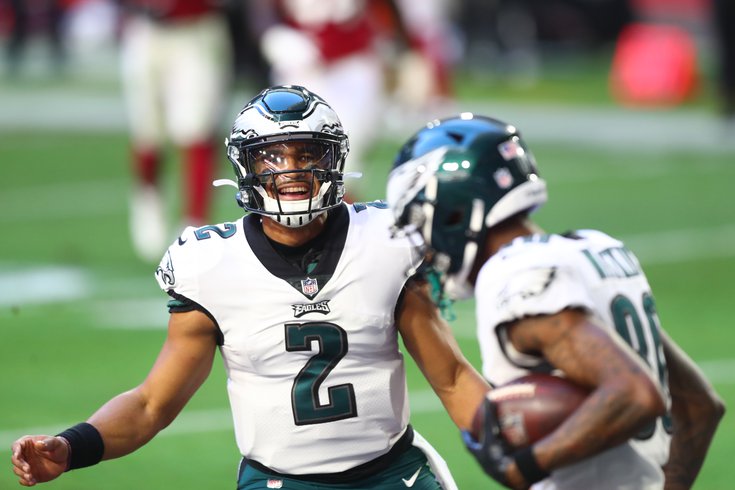 The Eagles — and especially head coach Nick Sirianni — have been hesitant to name Jalen Hurts the starting quarterback for the 2021 season, despite the fact that he's just one of two* quarterbacks currently on the roster. The other is an aging Joe Flacco, who was presumably brought in to mentor and back up the second-year QB and former Heisman finalist.

*Yes, they also have UDFA Jamie Newman, but he's still got a long way to go to make the 53-man roster.

Still, at every chance, Sirianni has preached competition at quarterback and every other position, including coaches, and has yet to even name Hurts the favorite to land the job, instead going with the "nothing is given" approach.

But something Sirianni said at his Friday press conference, following the first day of Eagles rookie minicamp, may have given an indication that while publicly there's still a QB competition raging down at the NovaCare Complex, behind closed doors, this race is over and everyone knows it. (And, honestly, everyone outside the building knows it too, no matter how hard Sirianni tries to sell us on his love of competition).

Let's see if you can spot it in this response to Jeff McLane's question about whether or not they're designing the offense around Hurts' mobility or if they're just bringing the offense he ran with the Colts and slightly tweaking it...

"Of course, Jalen has strong qualities of being able to extend plays and move around and extend plays, so we're definitely looking at those things and doing those things. We've all had a very extensive amount of time with quarterbacks that are mobile, and that's the same thing for Miles [Sanders]. Miles, what does he fit? Again, these are things when we get on the field with him, we'll figure out a little bit more, but that's still to be determined of what everybody's skill set is.

Did you catch it? The part about "adapting to the players you have and playing to their strengths?"

For starters, it's great to hear that answer from Sirianni, that he's looking to build his system around the strengths of the players on his roster, and not building his roster around a hard and fast system that he's unwilling to change. Doug Pederson worked well in this regard too — just look at what he and then-offensive coordinator Frank Reich were able to do with Nick Foles back in 2017, and Sirianni is a Reich pupil, so it's safe to assume he'll be similar in his willingness to adapt his system to his players.

In football, no player is more important than quarterback, and if you're designing your offense around any one player, it's going to be the QB. That's especially true for a quarterback liked Hurts, who brings an added dimension to the field with his mobility and ability (not to mention willingness) to extend plays with his legs. To design an offense that forces him into being a pocket passer would be malpractice. And the good news is, Sirianni doesn't seem to be planning any such thing.

But all of this assumes one big thing: that Sirianni and Co. already know that Hurts is the starting quarterback.

They may not be willing to say so publicly, but if he and offensive coordinator Shane Steichen are building their first system together and are planning on installing it over the summer, then don't they already have to know whether or not Hurts, with his unique set of skills, is going to be QB1?

In fact, according to Sirianni himself, the Eagles have already started virtually installing an "extensive" amount of the offense, which means they already have an idea of what this team will look like when it takes the field, at least that's the case if you take Sirianni at his word and believe that he's building his system around the players and not the other way around, although it's hard to marry that claim with the coach's other claim that there's open competition at every position.

Either way, to hear Sirianni tell it, Hurts is absorbing the offense the way you'd want your starting quarterback to.

"And Jalen has just done a good job of taking the plays that have been taught to him, and he can really rattle off exactly what he's supposed to do on every single play. It'll be exciting to get on the field with him and see him do it physically."

Sure, they're probably starting with more basic concepts, but the point remains: there's no way Hurts isn't the starter when the Eagles take the field in Atlanta on September 12.

After all, how can you be building an offense around your players if you don't yet know who those players are going to be, especially when the two guys "competing" for the QB job are polar opposites.

If a younger, more mobile quarterback was signed this offseason instead of Flacco, perhaps fans could be talked into a true QB competition unfolding at camp, but Flacco and Hurts couldn't be more different in what they bring on the field. One is the definition of a pocket passer while the other is one of the more dangerous running quarterbacks in the league once he gets moving. Therefore, a Hurts-led offense should look considerably different than one being run by Flacco.

Still, Sirianni swears there's a competition at QB, just like there is at every position on the roster. But when you hear him go into greater detail on these "competitions," it becomes clear that this is more of a manufactured way to push his players than a true competition, at least at some of the positions.

In fact, it's not a far leap to go from this to his games of Rock, Paper, Scissors with prospects. The dude is super competitive. He's probably the guy who races you at the ATM.

But he does have a point there. Irons sharpens iron and all that, and that type of thinking will definitely have a greater impact on a locker room in transition like the Eagles' currently is. Veteran leaders will need to make sure they don't rest on their laurels, younger guys will be taught from the start to compete for everything and take nothing for granted, and the fresh-faced coaching staff will be right there with them.

The real competition, at least for Hurts, might not come until the season actually starts, when he'll have to prove that he deserves to be the guy to lead this team moving forward. And the people he'll be competing against aren't even on the roster yet.

The Eagles will have a big decision to make at QB after this year, and it's almost like the 2021 season is a 17-game audition for Hurts. The Birds are likely to have three first-round picks next year, meaning they'd have the ammo to move up and draft any QB they want next year should Hurts fail to live up to expectations. Furthermore, they'd also have the assets to trade for a veteran passer, something Sirianni dismissed on Friday.

Still, whether or not Hurts is the guy going forward will be the biggest topic of the year, and regardless the Eagles will need to make a decision one way or the other, which could be made increasingly difficult if Hurts is just mediocre this season. In some ways, it would be better for the Eagles for him to flat-out stink than it would for him to be so-so (and that's not even considering what a bad season would mean for the Eagles draft prospects). At least the decision would be easier to make.

But Sirianni isn't thinking about that just yet — and considering he only coached his first NFL practice on Friday, can you really blame him? Instead, he's focusing on simply being better than he was yesterday. And he'd like to see the same from his players, including Hurts.

"Yes, that applies for Jalen to get better, and that applies for everybody on our team, to get a little bit better every single day. And that's all we're concerned about right now is how we're going to be better tomorrow than we were today, are we going to put in the work today to be ready to be better tomorrow? Honestly, that is all we're concerned about with every single player on our team right now."

Sirianni is hoping competition is the way to do that, whether it real, manufactured or otherwise.