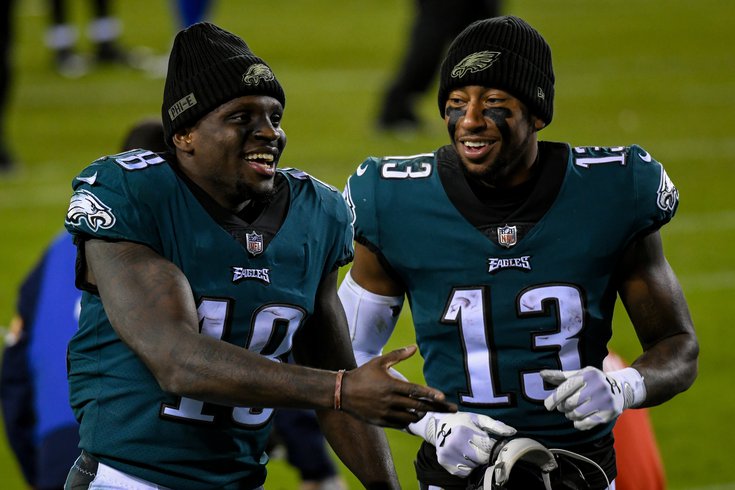 The 2021 NFL schedule was released on Wednesday night, and that means that the last 16-plus hours have been filled with everyone under the sun offering up season predictions for your favorite football team.

Now it's time for one more.

If you're an Eagles fan, some of these predictions might be difficult to read, with even the most optimistic prognosticators putting them right around .500 on the year — and many others predicting significantly lower win totals. But that was to be expected. After all, the Eagles were one of the worst teams in the NFL last season, they have a new head coach and a quarterback with a lot left to prove. They also were in a tough salary cap situation this offseason which limited them in free agency, meaning it was impossible to do an overnight rebuild despite the team entering the draft with double-digit picks.

In other words, 2021 is going to be a rebuilding year for the Birds, and through that lens, it's almost better that the team lose as many games as possible. But more important than wins and losses will be what the Eagles learn about their young players, specifically Jalen Hurts. With a likely trio of first-round picks next offseason and veteran QBs and prospects alike being available, Howie Roseman and the powers that be will need to decide if Hurts is the answer moving forward. Not getting a definitive answer one way or the other would leave the Eagles in a difficult spot heading into what could be the most important offseason since, well, since this offseason when they fired their coach and traded away their franchise QB.

In other words, predicting Hurts' week-by-week performance actually might be the more relevant thing to do here, but since we're all creatures of habit, we've instead spent the last day or so going through the Eagles schedule and predicting the result of each game — you know, when we don't really know who will be starting at every position, let alone which players will be injured, etc.

This writer won't go too in depth with game-by-game predictions, but will offer up one big prediction for the end of the season: the Eagles finish with a 6-11 record (that feels weird to write), wind up with a top 10 pick and ultimately have a new quarterback under center next season, whether that comes through the draft or by using their plethora of picks to land a veteran.

As for Hurts specifically, it will ultimately be the lack of weapons around him and questionable offensive line play (the injuries in recent years are scary) that are his undoing. I'd like to imagine a scenario in which Nick Sirianni and Co. build the perfect system for him to thrive — and having the type of backfield their putting together is a good first step there — but it's just too much to bank on currently. And when it comes to throwing the ball, DeVonta Smith is a huge addition, but that's really the only improvement over last season. I think Hurts can be a starting QB in this league, but I don't think it's going to happen with the Eagles. That being said, with everything I've heard and read about Hurts, I wouldn't bet against him.

Now that you've heard my take that will surely end up getting me mocked in a year's time, let's look at some season predictions from NFL writers both locally and nationally in our first prediction roundup of the new football year. But first, a bit of a spoiler warning: we weren't able to find anyone picking the Eagles to make the playoffs.

On to the predictions...

[Note: Some of these posts include week-by-week predictions and not just final records, so I highly recommend clicking over for more detail.]

Few teams are ready to move on from the 2020 quite as much as the Philadelphia Eagles. The injuries to several key players, the quarterback drama with Carson Wentz and tension between the front office and Doug Pederson was too much to overcome.

2021 offers a reset. Wentz and Pederson are gone. Second-year quarterback Jalen Hurts and new head coach Nick Sirianni step in to give the franchise a fresh start.

The only problem is neither are proven.  [bleacherreport.com]

I think the Eagles are looking at a range between 6-11 and 8-9. I might be overestimating their floor there, too. But, what can I say, you guys know I’m a relentless optimist! [...]

It’s really not the end of the world if the Eagles finish with a poor record this season. As much as people don’t like to hear it, they’re just not seriously competing for a Super Bowl this season. Jeffrey Lurie told us as much after the season by admitting this team needs a retooling.

The hope is the Eagles can show enough positives in 2021 to build on next offseason as they have more cap space and three potential first-round picks to work with. A strong performance by Howie Roseman could have the Birds realistically challenging for a title again in 2022.  [bleedinggreennation.com]

Third in NFC East, behind Cowboys (12-5) and Giants (10-7)... The Eagles, with a new staff and a young roster, have a bit more optimism going for them. While fans are concerned about QB purgatory, following a 9-8 season, the Eagles have every option on the table, as Carson Wentz plays all but one game for the Colts and clinches a third first-round pick for his former team. Hurts plays well enough to keep his job in a vacuum, but will that prevent the Eagles from looking elsewhere? Only time will tell.  [nj.com]

This rides on how well Jalen Hurts plays in his first season as a starting quarterback, but there are a lot of holes on the roster -- specifically in the secondary. Thanks to the NFC East, the Eagles are good enough to win a couple games in the division and be in the thick of the division race this December. This record could easily be 10-7 if Philadelphia can survive the first quarter of the schedule (there are no daunting portions of the schedule that can ruin this team's season). Atlanta is a must-win game.  [cbssports.com]

After changing head coach and trading away Carson Wentz, the 2021 season is an intriguing test for the Eagles. The overall weak schedule should give them an opportunity to impress. However, if they struggle with a schedule that is perceived to be the easiest heading into 2021, then it could be a bad sign for the future of a number of members of the organization.

The projected Vegas win total has the Eagles set to win 6.5 games in their 2021 schedule. That number feels about right, but if they cannot pick up wins in tough games at home we could see them falling short of that mark this season.  [profootballnetwork.com]