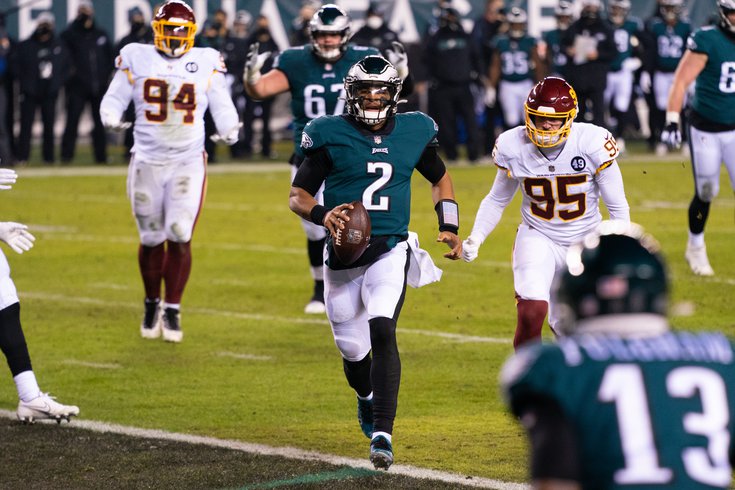 Is it a semi-pointless exercise to predict each regular season game's outcome as early as May, a day after the schedule was released? Yes, yes it is. Because I'm a hack sellout, let's just go ahead and do it anyway.

• Week 1, Eagles at Falcons: The Eagles have had some bad early season losses in Atlanta in recent years. Some that come to mind:

In 2021, the Eagles' secondary could simply be overwhelmed by a Falcons offense that includes Julio Jones, Calvin Ridley, and now Kyle Pitts.

Also, the Eagles have lost six straight games against other bird teams. #Analytics.

• Week 2, 49ers at Eagles: The Niners were wrecked by injuries in 2020, but their defense should be back to form in 2021. Offensively, it'll be interesting to see if Trey Lance will start from Day 1, and what happens with Jimmy Garoppolo. The Eagles' secondary will be tested once again, this time by a skill position group that gobbles up yards after the catch with guys like Deebo Samuel, Brandon Aiyuk, and of course, George Kittle.

• Week 3, Eagles at Cowboys: Yeah, the Cowboys' defense is trash, but offensively, Dallas should be able to do serious damage through the air with Amari Cooper, Michael Gallop, and CeeDee Lamb. Do you see a trend developing here?

• Week 4, Chiefs at Eagles: OK, I hate to just keep naming the skill position players on each opposing team, but how are the Eagles going to stop Tyreek Hill, Mecole Hardman, and Travis Kelce? So to recap, the Eagles' first 4 opponents, and the top 3 weapons in each of their passing attacks:

😬. After the first four games of the season, there's a decent chance we're saying, "The Eagles are on pace to allow (fill in some astronomical number) passing yards this season."

• Week 5, Eagles at Panthers: Carolina has dumped a ton of draft capital into their defense, and it'll be interesting to see if that can become a dominant unit over time, but I don't quite understand what they were thinking in trading away three picks for Sam Darnold, including a second-round pick in 2022. He's not the answer, and they're only going to spin their wheels in 2021. I like this spot for the Eagles to pick up their first win of the season.

• Week 6, Buccaneers at Eagles: The Eagles will host the Bucs on a short week on a Thursday nighter in Philly. Won't matter. Tom Brady should be able to pick apart the Eagles' back seven.

• Week 7, Eagles at Raiders: I'm curious how many of you are already planning to travel to Vegas both for this game and whatever other extracurricular activities you filthy animals are into. Philly represents in the casinos, in the stands, and on the field against this crappy Raiders roster.

• Week 8, Eagles at Lions: Thank you to the schedule makers for not making me cover a football game between a pair of bad teams on Thanksgiving in Detroit. I am in your debt. The Lions are in the conversation for worst team in the NFL.

• Week 9, Chargers at Eagles: The Chargers are a talented team coming off of an injury-riddled 2020 season. They are sort of giving me 2017 Eagles vibes, in that Justin Herbert is a second-year quarterback who showed a lot as a rookie, and I like some of the under-the-radar free agency moves they made this offseason.

• Week 10, Eagles at Broncos: Will the Broncos land Aaron Rodgers before the start of this season? I kinda think that will happen. And if so, they will immediately become Super Bowl contenders.

• Week 11, Saints at Eagles: It's going to be fun watching the downfall of this extremely hateable Saints team. Taysom Hill isn't a legit NFL quarterback.

• Week 12, Eagles at Giants: What a pathetic loser franchise the Giants have become.

The Giants face both teams that played in the Super Bowl last year, and they’re circling the team that went 4-11-1? Lol. OK, we'll project the Giants will win their Super Bowl this season, in a turnover-fueled 13-12 thriller.

• Week 13, Eagles at Jets: The Eagles will likely just stay in North Jersey and practice there all week, in preparation of their second consecutive game at the Meadowlands. (I kid, I kid.)

The Eagles are 11-0 all-time against the Jets. I'll lazily end my analysis of this team there, and call it a Birds win.

• Week 15, Football Team at Eagles: The Football Team swept the Eagles in 2020, and I have a feeling they'll do the same in 2021. They have a chance to take their defense to the next level (I believe they will), and their pass rush just feels like a bad matchup for an Eagles offensive line that will probably be missing like three starters by this point in the season.

• Week 16, Giants at Eagles: Drunk off their win over the Eagles in Week 12, the Giants forget that their season isn't quite over yet, and they lose their next three games before taking a loss in Philly.

• Week 17, Eagles at Football Team: Yeah, again, by this point in the season, at what positions will the Eagles be completely injury-decimated? In 2020 it was their offensive line. In 2019, it was, uh, take your pick. In 2018, it was their secondary. Will it be the O-line again? Receiver? D-line? Lots of options, and they don't have the depth to sustain multiple injuries at most positional groups, while the Football Team does, even if they don't have a quarterback yet.

• Week 18, Cowboys at Eagles: Tank, Part II. Who cries about it this year?

• Colts' record: 9-8, no playoffs, and Carson Wentz plays the required percentage of snaps for Indy's first-round pick (17th overall) to go to Philly.

And here are our win-loss predictions, in podcast form: