Eagles mailbag: Build a 22-man starting offense/defense, using no more than one player per NFL team 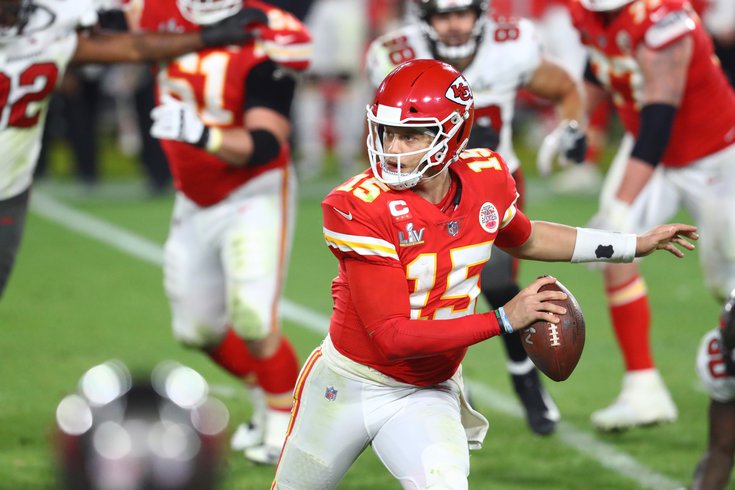 Patrick Mahomes made the cut.

Question from Dr. S: Build the best starting 22 you can, taking no more than one player from a team (so if you pick Patrick Mahomes, can't have Travis Kelce as well).

Question from Mig: The good thing about being so trash last year is the Eagles' place in the waiver claim order. Any players you could see potentially getting cut that could interest the team?

Yeah, in years past in which the Eagles made the playoffs, they wouldn't have been able to pick up Kerryon Johnson because some other team with a worse record would've claimed him before the Eagles would have had a chance. It's a small benefit, because guys that get waived typically aren't prized players, obviously, but you can use the waiver order to help build the back of your roster with better depth, or developmental players.

I can't predict what players will be cut around the league that would appeal to the Eagles, but I will say that when teams cut down to 53 players in September, I would expect the Eagles to be very active on the waiver wire market, because (a) their roster has depth issues at so many positions, and (b) as you noted, they're high on the waiver claim priority order.

Question from bradco: Very important year for Josh Sweat. Are we asking too much for 10 sacks and good pressure regularly?

Yes, you’re definitely asking for too much if you’re looking for 10 sacks. He’ll probably back up Derek Barnett again, and I think it’s reasonable to expect him to consistently get good pressure when he’s in the game, however, I don’t know yet if he’s a guy you want playing a hefty number of snaps. There’s a belief that I have heard that the more snaps he plays, the less effective he will become.

Question from Flipadelphia: What are the best training camp battles you see coming into play? LT? CB2? WR3/4?

Jordan Mailata vs. Andre Dillard will be the most noteworthy battle in training camp. And then, yes, I would say CB2 is right up there as well, in terms of starting spots to be earned, especially if they just don't sign a vet.

Wide receiver will require a little more nuance. DeVonta Smith and Jalen Reagor will start, barring any unexpected developments, but I don't think there will necessarily be a guy that we can call the WR3 or the WR4. Usage of the receivers beyond Smith and Reagor will likely be matchup-based, since the backups come in all different shapes, sizes, and skill sets.

I think safety is another one to watch. Anthony Harris will start, but Rodney McLeod very likely won't be ready for the start of the season, so you're looking at a battle between guys like Marcus Epps, K'Von Wallace, and Anthony Adams. If I had to pick a favorite right now, I would guess this won't be popular guess, but I'd go with Epps.

Question from Michael K: Do you think Kerryon Johnson or Jordan Howard has a better shot at making the roster? Howard is seemingly in decline, but they don’t have many “north/south” types. Stats say RBs with injuries like Johnson's rarely recover well, but he is seemingly known for great pass pro. To your eye, does he offer enough upside over Howard in pass pro to get the nod here? Are there other factors that might be important?

I agree with your point that the Eagles don't have a dedicated between-the-tackles banger, however, I'm not sure Howard is even that anymore at this point in his career. Even he wondered if his career might be over before the Eagles signed him this offseason.

I think that Johnson offers more overall, even if he's not the sledgehammer type that I agree would make sense. Neither guy is a long-term answer, in my opinion.

Question from Jimmy's long lost son: Do you think the Eagles keep Zach Ertz if a good offer isn't made for him?

I'll also note that I believe there isn't a big gap between 1 and 2, but there is wide gap in between 2 and 3.

Question from geonerd: Any good available punters that the Eagles could look to sign? Or do you not think they will sign any?

It was pointed out during the chat that Max Duffy (Kentucky) hadn't signed anywhere yet. That surprises me. I figured he'd at least be a UDFA signing for some team out there.

He did get selected in the fourth-round of the "CFL Global Draft." So he's got that going for him. Actually, the lone punter on the Eagles' roster, Arryn Siposs, also got taken in that draft, three spots after Duffy, ha.

Anyway, we covered Duffy back in January.  I really don't ask for that much, Eagles. Give me a friggin' punter competition, you jerks.

Question from Dr. S: Are the athletic & size measurement percentiles for drafted players just compared to the field that year? Or is it a cumulative grade from all drafts?

Those spider charts (via mockdraftable.com) compare all players competing at the Combine (or whatever pro day records they have, I think), since 1999. I do wonder if they should actually shorten that a range a bit, for a better comparative idea of a player’s athleticism.

In 1999, for example, the majority of players weren’t training for months and months to specifically perform well in those drills, and they pretty much all do that now. In other words, players drafted closer to 1999 are going to have worse athletic measurables on average than guys drafted closer to 2021.

Question from Petey X: I need a debate settled between me and my girlfriend. How much should you tip the pizza delivery guy?

I've worked in restaurants in the past, so I probably over-tip compared to others, just generally speaking, as many former restaurant workers do. But as it pertains to delivery people, I think most people tip those guys/gals less than they would a waiter/waitress in a restaurant, which I kind of don't understand.

Think about what you're getting. You make a one-minute phone call and someone will cook a meal for you, then deliver it to your house. You barely have to leave the sofa. Your biggest inconvenience is that you have to pause whatever show you've been binge watching for three hours already, for like a minute or two. I mean, in a world where there are so many services that do not meet expectations, that is an invaluable one that I think many of us take for granted. So, you know, make it worth the while of the person driving your food to your face.

Tip at least 20 percent, with a minimum of $5, as in, if your order is only like $15, you still have to give the driver five bucks. So whoever is on the "You don't have to tip those people that much" side, either stop being cheap, or go pick it up yourself. 😍