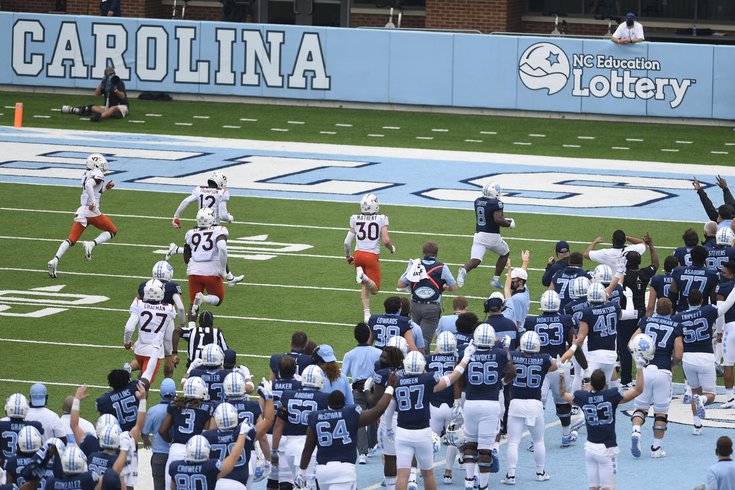 Michael Carter is a souped up Boston Scott.

As long as you're taking in some college football bowl game action this Saturday, here are some players who could make sense for the Philadelphia Eagles in the 2021 NFL Draft.

But seriously, I love this guy:

Anyway, I'm not saying the Eagles should draft a punter (maybe with a 7?), but Duffy is one of the top two punter prospects in the country, and he'll compete at the Senior Bowl in January.

Meanwhile, Cameron Johnston (a) did not have a good season, and (b) his restricted free agent tender amount is projected to be $2,240,000 this offseason, which the Eagles should not pay.

Eisworth is the leader of the cyclones defense. He is a very good run defender, who knows when to make the sure tackle in open space, and when to deliver a pop. While not the most athletic safety in this class, he has good pass breakup numbers (19 PBUs in 3 seasons), and he knows where he is supposed to be.

I like Eisworth's initial fit in the Eagles defense in sub-packages, perhaps as a dime linebacker, who can eventually grow into a starting strong safety role. Day 3 guy.

Carter and Javonte Williams (previously profiled here) form the best RB tandem in the country. It was fun watching Carter and Williams absolutely wreck the Miami defense earlier this season when Carter ran for 308 yards, and Williams ran for 236.

Carter has been involved in the UNC offense since he was a freshman, and he put up huge numbers as a senior:

Carter was also a productive receiver out of the backfield, as he had 82 career catches for 656 yards and 6 TDs. He also returned kicks, though he didn't have any return TDs.

Despite being a part of UNC's offense for four years, he doesn't have a ton of mileage on him, as he has fewer than 600 touches over his four-year college career.

Basically, Carter is a souped up Boston Scott. If you're of the mindset that the Eagles already have a Boston Scott on the roster at an extremely cheap cost and you're fine with what he gives you, then you wouldn't have interest in Carter. If you think Carter can make a bigger impact in the way the Eagles use Scott and are willing to expand that role, then Cater makes sense early on Day 3. It'll be interesting to see how the league values him.

Brown has averaged at least 20 yards per catch on at least 50 receptions each of the last two years:

I believe most view Brown as a Day 3 guy. If he's there on Day 3, he's absolutely worth a swing. I certainly like him a whole lot more than I liked John Hightower or Quez Watkins, for example. But the bet here is that he'll be a riser, and could sneak into Day 2.