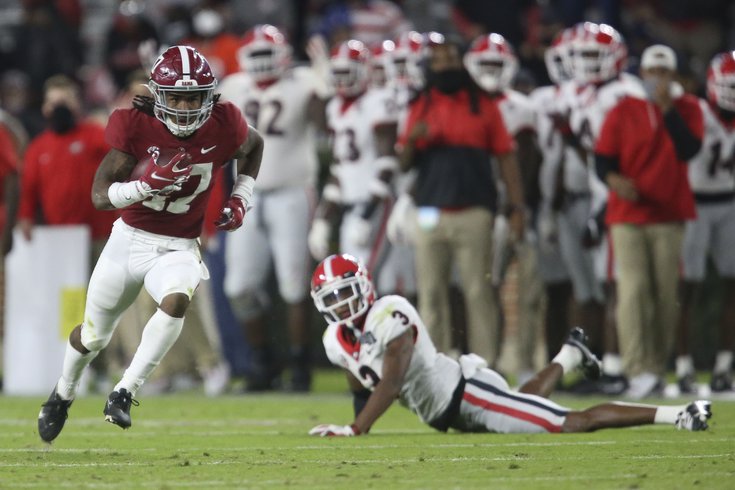 Jenkins has plenty of game experience both at LT and RT, and also has a couple of starts under his belt at RG. He is starting on the left side this season, but he prefers the right. Jenkins made Daniel Jeremiah's top 5 OL list Friday night.

Jenkins isn't an elite athlete, but his overpowering strength has become sort of legendary in the Oklahoma State weight room. He'll compete at the 2021 Senior Bowl (if it's still on).

With Lane Johnson's "collapsed" ankle potentially hampering him for the rest of his career, and Brandon Brooks having to recover from a second Achilles tear, the Eagles could be in the market for an offensive lineman who can play multiple spots, but eventually settle in as a long-term answer at RT.

Hutchinson had an encouraging season in 2019, when he racked up 69 tackles (a big number for a DL), 10.5 TFL, 6 batted passes, and 3 forced fumbles. Heading into 2020, many were expecting big things from him, but he only played in two games before breaking his leg. For his career, Hutchinson only has 3.5 sacks, though in fairness, it's not over a large sample size.

He's a power rusher with scheme/positional versatility. In the Eagles' current scheme (we'll see if that's still around next year), he could probably play a Michael Bennett type role, as a DE/DT hybrid. A look:

Hutchinson would probably be wise to stay in school for another season, but if he comes out, I believe the appropriate value would be late in Round 2, or early in Round 3.

Waddle's game is all about speed. In the video below, watch how many times it looks like a defender has an angle on him, and then... nope.

Through the first two years of his career at Bama, Waddle was relegated to the slot, as he played alongside other first-round receivers like Jerry Jeudy and Henry Ruggs. In 2020, he was poised to take on a much bigger role in the Alabama offense, which he did initially, catching 25 passes for 557 yards (22.3 YPC) and 4 TDs in just 5 games, before a suffering a broken ankle.

In addition to his game-breaking ability as a receiver, as you can see in the video above, Waddle can also change games as a returner. He has 3 return TDs in his college career.

He's going to be a first round pick, and likely top half of the first round.

Moses was being recruited by LSU and Alabama when he was heading into eighth grade. He eventually landed at Bama as a five-star recruit, with prototypical size and athleticism. After strong freshman and sophomore seasons, he was heading into the 2019 season as the leader of the defense, and was being projected as a first-round pick, but an ACL tear in August of that year ended his season.

As a kid who breathes football, I still feel like some team will take him in the first round, but should he fall out, if there were a ever a time to snatch up a linebacker in Round 2 and address the position with a prototype three-down player, this is it.

The Eagles clearly need a CB2 this offseason, as attempting to roll with a handful of extremely undersized guys opposite Darius Slay has not worked out, and many suspected. Horn is a first-round corner with great size at 6'1, 200, but who won't get consistently roasted deep like Rasul Douglas did in the Eagles' scheme because of a lack of speed.

Horn is a physical press corner who could matchup well against the league's bigger receivers. A look:

Horn also has NFL bloodlines, as (feeling old alert) he is the son of former Saints WR Joe Horn, of "cell phone in the goalpost padding" fame.

(Horn opted out of the rest of the season to prepare for the 2021 NFL Draft.)