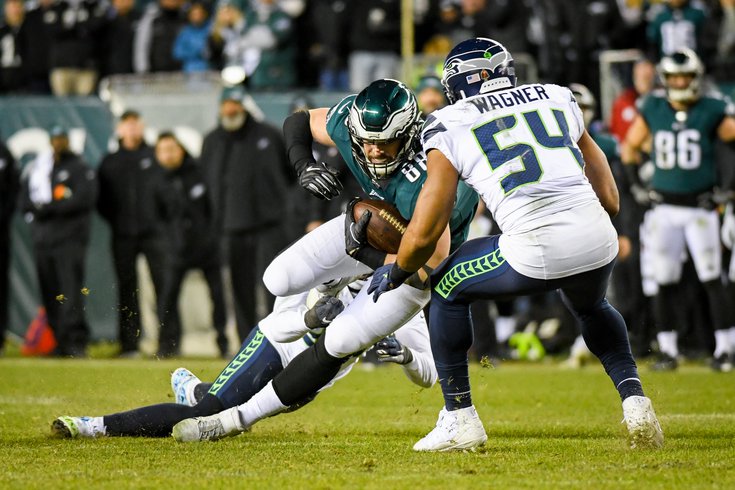 Eagles tight end Dallas Goedert during Philly's wild card loss to the Seahawks back in January.

The Eagles haven't had the best of luck lately against the Seahawks, losing six straight and eight of their last night against them dating back to 2005. Unfortunately, the odds are stacked against Philadelphia once again on Monday night when they will host Seattle in primetime as 5.5-point underdogs, according to TheLines.com.

However, streaks like this are meant to be broken — just look at the Giants snapping an even longer losing streak against the Eagles just a few weeks back — and maybe that's the only thing giving Philly fans hope against Russell Wilson and Co. in Week 12. But sometimes, that's all you need.

The Seahawks are currently in second place in their division and arguably make up one of the biggest Dr. Jekyll-and-Mr. Hyde teams in the NFL, ranking second in the league in points scored while ranking 28th in points against. That second part is what's giving Eagles fans hope, but do you really want to face an offense as potent as this in a shootout?

The Eagles have never beaten Russell Wilson. They haven't beat the Seahawks at all since 2008. And they appear to be on the brink of having their 2020 obituary written, even if they're still very much in the race to win what will amount to a hollow division title in the god awful NFC East. Can they change the narrative with a big win under the lights at the Linc?

Let's take a look at how our writers see Sunday's game playing out with our weekly predictions...

Usually, by the time we make picks here, we've already published our "five matchups to watch," and other game-related articles, like injury updates and such. We haven't done that this week, because really, who cares? The Eagles are a very bad football team that continues to play worse and worse as the season progresses, and there are no realistic signs that things are going to turn around anytime soon.

The Seahawks, meanwhile, have played wild, down-to-the-wire games all season long, but I doubt that even they can find a way to make a game that involves the Eagles entertaining.

Give me the Seahawks to continue to own the Eagles, and sure, I'll gladly lay the 5.

Of the upcoming four games for the Eagles — who are out of first place for the first time in over a month — this one is in my opinion the most winnable. It’s at nighttime, which for whatever reason seems to be an advantage for Philadelphia. It’s against a malleable secondary. It’s with extra rest for the Eagles. And it comes on the heals of a much needed taste of reality for the team, as they’ve shuffled the offensive line and will hopefully take the field as a humble, run-first team.

I’m going to go out on a limb here and give the Eagles one last vote of confidence. Russell Wilson has shown he’s human and the Seahawks aren’t the juggernaut everyone thought they’d be a few weeks ago.

The Eagles should be packing it in and looking toward the 2021 season (and beyond), but because of their putrid division, they remain in contention. However, with Washington's win over Dallas on Thursday, the Eagles have slid to second place in the NFC East for the first time in a while. And if the Giants can pull off a win on Sunday, the Birds will drop to third heading into Monday night's game against Seattle.

The Seahawks might not have the best defense in the world — it's actually the worst — but their offense can score, and I don't really see this defense shutting down Russell Wilson and those Seahawks receivers. If the Eagles offense can get going on Monday night with Zach Ertz back in the fold, this could be a high-scoring affair in South Philly, but it's hard to see them keeping up with Seattle's offense. Not with the way this team has been playing.

Maybe the Seahawks can finally hand the Birds their first real blowout loss of the season, and maybe that will finally put the nail in their proverbial coffin, allowing them to close the book on the 2020 season and begin building for the future. Unfortunately, Doug Pederson's philosophy seems to be that as long as this team is mathematically in the race, they're going to continue to try to make the playoffs. And given the division, that's going to be the case for quite a while.

As the kids these days like to say, "L." Dreading sitting through this one and wasting a perfectly good Monday evening. 30-17, Seattle

Russell Wilson is 4-0 as a starter against the Eagles, and 5-0, including playoffs. On Tuesday morning, he'll be 6-0, after the Seahawks dust off this badly listing team that's starring in its own Greek tragedy called, "The Gang That Couldn't Shoot Straight."

The Eagles really are must-see TV, because they've become so comical. As their grasp of the NFC East continues to slide, the Eagles do find themselves currently in serious contention for one ignominious title: Worst team in the NFL. Thankfully, the Dallas Cowboys are in the same division, and the New York Jets never let anyone down when it comes to being hideous.

Right now, playing behind a mishmash offensive line spells a recipe for a possible season-ending or even career-threatening injury to Wentz. After the Eagles lose these next four games (Seahawks, Packers, Saints and Cardinals), will it be worth risking Wentz to further injury in a season that this organization fails to realize was over a month ago?

If they pull off a miracle and somehow manage to win the NFC East, would it be worth it, considering the Eagles clearly have no future these next couple of years, with no chance to win another Super Bowl and probable early-postseason knockouts?

If so, the Eagles become the Andre Iguodala 76ers, a middling team perpetually stuck at .500 (if they're lucky) moving forward.

Have fun with that.

I was so excited to finally pick the Eagles to convincingly win a football game. That dream died with Lane Johnson's season-ending injury on Friday. The numbers with vs. without Johnson are too strong to ignore. I actually thought they would win a game in which Seattle would sleepwalk through three quarters. Now, they could probably get away with doing that the entire game, and still win. Eagles lose, 34-18.

Life has a way of testing you and just as the Eagles season seems ready to careen off the rails, the team meeting them Monday night at Lincoln Financial Field is the Seattle Seahawks, an organization Doug Pederson has never beaten since returning to Philadelphia as head coach and a team that has always found a way to beat the Eagles since Russell Wilson arrived in 2012.

Wilson remains one of the top quarterbacks in the game this season for the 7-3 Seahawks and is 5-0 as a starter against Philadelphia, including dual 17-9 wins last season, both at the Linc, a Nov. 24 affair just before Thanksgiving Day and the Jan. 5 Wild Card Weekend game in which Carson Wentz was knocked out early with a concussion.

The Seahawks are a bit different these days. When Wilson first arrived as a third-round pick out of Wisconsin, he was the playmaker to complement that best defense of the generation, "The Legion of Boom." These days, the superstar is carrying the load and making up for the deficiencies of the other side of the football where Seattle is ranked dead last in the NFL in defense, allowing 434.9 yards per game.

The major issue is pass defense where the Seahawks are again No. 32, allowing 343.7 YPG. Meanwhile, the run defense for the Seahawks has been more than capable at No. 4 overall but some of that is a chicken-and-the-egg situation in that it's been so easy to throw against Seattle coupled with the realization teams are usually in a shootout anyway because of Wilson's effectiveness.

In other words, this isn't the week for the turn around and hand it to Miles Sanders crowd. It is, however, perhaps the final opportunity for the embattled Wentz to turn his trainwreck of a season around.

Call it a hunch but the guess here is that Zach Ertz's projected return to the lineup will mesh with Wentz understanding time is running out when it comes to fending off the hesitation of the organization.

That in turn should provide an opportunity for Wentz to lock into his favorite receiver without hearing all the noise about spreading the football to other playmakers who simply haven't produced anyway since Ertz has been sidelined with an ankle injury. As for Ertz himself, yes he remains angry at the organization but with the trade deadline in the rear-view, this is his fate right now and the only way to get the contract he wants -- here or in another city -- is to start playing like Zach Ertz again.

Call it a 10-catch game for the Eagles' TE and the first Philadelphia win over Seattle since 2008.

MORE: McMullen: Debunking some Wentz narratives — and getting to the bottom of his real issues