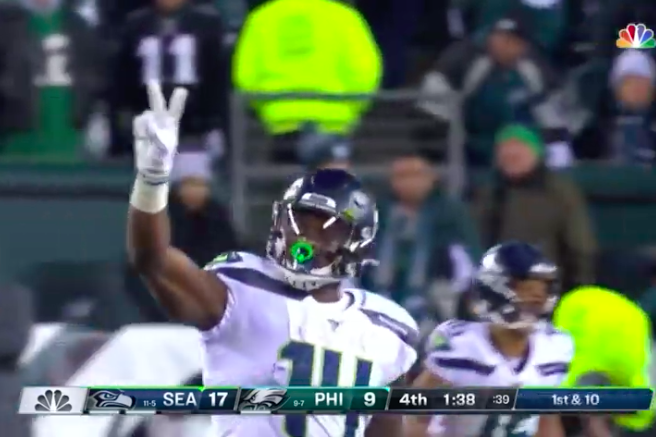 The Philadelphia Eagles' last meeting with the Seattle Seahawks, an ugly 17-9 loss at home in last year's Wild Card playoff game, was about as much of a disaster as anyone could have scripted.

Beyond the first-quarter concussion for Carson Wentz and the lumbering effort of 40-year-old backup Josh McCown, the lasting image of the Eagles' furious playoff push was D.K. Metcalf throwing up a peace sign to the fans at Lincoln Financial Field. He had just smoked Marcus Epps and Jalen Mills for a 40-yard bomb, sealing the game and completing a 7-catch, 160-yard performance led by a monstrous earlier touchdown in which he dragged several defenders into the endzone.

The Eagles infamously passed on that guy in the second round of the 2019 NFL draft. Now Metcalf thinks the Eagles' 2020 2nd round pick, surprise quarterback Jalen Hurts, should get the start on "Monday Night Football" when the two teams meet again.

ESPN betting analyst Jordan Schultz posed a simple question on Instagram on Tuesday: Should the Eagles turn the offense over to Hurts in the midst of an abysmal season for Carson Wentz and the 3-6-1 Eagles?

Metcalf said yes, as did Seahawks running back Deejay Dallas.

The #Eagles are playing the #Seahawks on Week 12. pic.twitter.com/NpnJVAhDNP

Eagles fans have largely turned their attention this year to Vikings wide receiver Justin Jefferson, the latest stud the team ignored in a draft, but Metcalf's input on the Wentz/Hurts situation is a backhand slap in the face to remind Philadelphia of its miscalculations.

Metcalf knows Hurts from facing him in college, so perhaps there's a bit more context than just Wentz's struggles. But it's also pretty brutal to weigh in on a quarterback controversy for the team you're playing next in a primetime slot.

Head coach Doug Pederson shot down the possibility of Hurts starting against Seattle after last Sunday's 22-17 loss to the Cleveland Browns, another miserable performance for Wentz. It's possible the rookie could see more time on the field in the offensive packages that have included him thus far. Maybe they'll be expanded.

The good news is that Seattle's secondary has been atrocious in 2020. If there's a game for Wentz to break out of his funk, this is probably it. He had plenty of motivation already: he's never beaten the Seahawks in four tries and they knocked him out of his only playoff appearance. Now D.K. Metcalf is suggesting the Eagles would be better off without him on the field.

Philly has lost six straight to Seattle going back to 2011, and the Eagles are 2-8 against the Seahawks in their last 10 meetings. They are currently five-point underdogs, according to TheLines.com's consensus odds.

As difficult and aimless as this season has been, a win against Seattle would mean something.