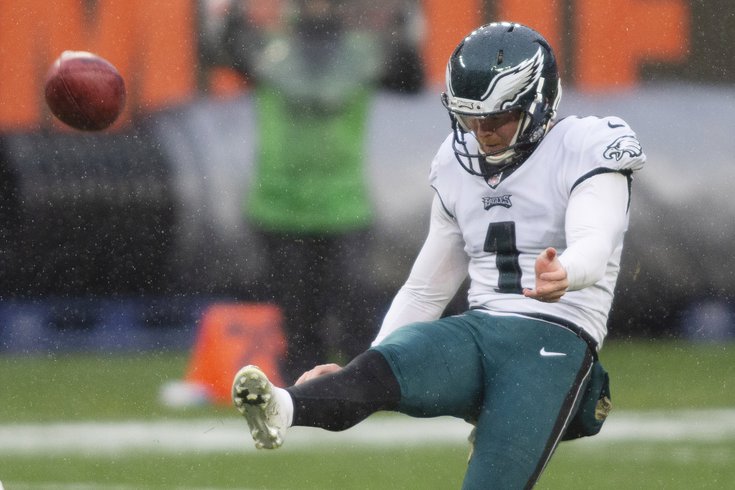 I'm out of ways to say the Eagles stink, so here's a picture of the punter.

Here's where people around the country have the Eagles ranked after Week 11 of the regular season. Oh, and here's our version of these sellout rankings, too.

What they're thankful for: C Jason Kelce

Kelce will start his 100th consecutive game Monday, extending the longest active streak among centers. He will do so in pain, as he suffered an elbow injury against the Browns on Sunday that limited him to the point where his teammates had to buckle his chin strap for him. Yet he continued to play, as he has through so many injuries over his 10-year career. It's part of the reason why he is one of the most revered Eagles of all time.

#JimmySays: Kelce is a good choice for what the Eagles should be thankful for. The Eagles haven't given Kelce any reason not to retire this offseason.

It was another lost Sunday for the Eagles offense, but Doug Pederson is not ready to make a move at quarterback. "You're sending the wrong message that your season is over," Pederson said of potentially benching Carson Wentz after a 22-17 loss to the Browns. "We have to work through this. When times get tough, that might be the easy thing to do." The Eagles certainly want to give Wentz every opportunity to succeed after signing him to a four-year extension worth up to $166 million in June of 2019. But why invest a second-round pick in Jalen Hurts if they had no intention of giving him a chance to help the team? Perhaps Hurts hasn't won over the Eagles on the practice field or in the meeting room, but that's all speculation. What we know for sure is the Eagles are a mess on offense and Wentz is a major reason why.

#JimmySays: As noted in our 10 awards post, making a switch at quarterback would be a move to try to save the season, not waive the white flag on it, even if such a move isn't even worth it by now.

The offense severely underachieved during the first half of the season, but somehow it came back significantly worse after the bye week. The play designs are a mess most of the time and neither routes nor protections are executed well. And when they are, Carson Wentz manages to do the wrong thing—the pick-six he threw in Cleveland was one of the worst pieces of quarterbacking you’ll see this season. They have Seattle, Green Bay, New Orleans and Arizona coming up as they try to protect a half-game lead in the NFC East.

#JimmySays: Wentz has thrown far worse interceptions this season than the pick-six on Sunday.

Carson Wentz owns two seasons with a QB rating exceeding 100.0. Yet the NFL turnover leader (18) hasn't cracked the century mark in any of his 10 2020 starts and has been below 80 seven times.

#JimmySays: I think the more succinct way to sum up Wentz's season is that he has statistically been the worst starter in the NFL.

The fact that the Philadelphia Eagles are still in first place in the NFC (L)East is darkly hilarious—because with each passing week, it becomes more and more apparent that the Eagles are almost laughably bad.

Against the Cleveland Browns, the same problems that have plagued the Eagles all season long were plainly evident. The offensive line was a sieve, allowing five sacks and twice as many quarterback hits. Carson Wentz continued to be a turnover machine, throwing two more interceptions (including a pick-six).

Wentz's struggles have led some to speculate that he could be benched—a notion that head coach Doug Pederson refuted Sunday:

"If you get to that spot where you don't start him or you bench him, I think you're sending the wrong message to your football team that this season is over, and that's a bad message. We have to work through this. When times get tough, sometimes that might be the easy thing to do. This sport is bigger than one guy. We all have a hand in it and we all have to fix it. "

Whoever wins Thursday's game between Washington and Dallas will pass the Eagles for what passes for first place in the league's worst division.

And with Philly about to embark on a ridiculous schedule stretch (Seattle, at Green Bay, New Orleans, at Arizona), things are almost certainly headed downhill from there.

#JimmySays: It's more likely than not that the Eagles will indeed lose all four of those games, which will put them at 3-10-1. Will the mounting pressure that is certainly going to continue to build over the next month break the metaphorical dam? And what will that look like, if so?

Longtime Eagles writer Reuben Frank of NBC Sports Philadelphia said what many are thinking after the loss to the Browns: It’s time to bench Carson Wentz. If the Eagles weren’t in first place of the NFC East, I think they would entertain the idea. It just goes against the nature of coaches and the league as a whole to bench a quarterback when you’re in first place, even if that shouldn’t matter.

#JimmySays: Honestly, I don't even think that matters at this point. Is Wentz deserving of a seat on the bench? Sure, but this team has a broken foundation that a symbolic quarterback benching isn't going to fix.

This team can't get anything going this season, even with guys back from injury. Carson Wentz simply isn't getting it done.

Who the hell would bet on the Eagles to win the Super Bowl?