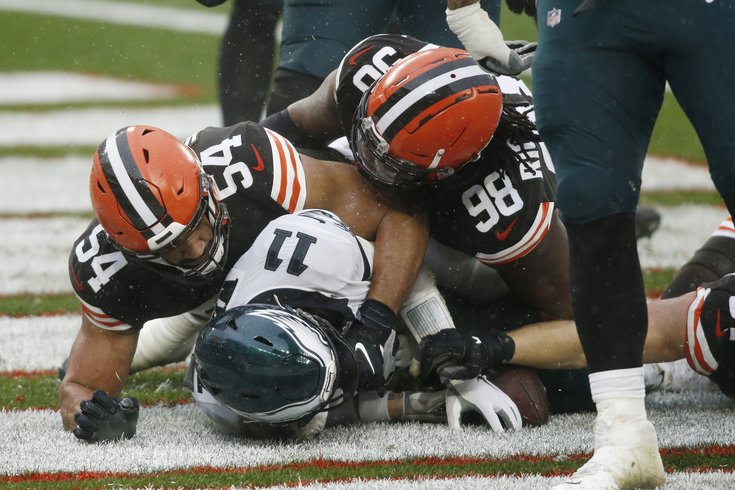 The calls for Carson Wentz to be benched are only going to get louder.

The Philadelphia Eagles had a chance to beat a Cleveland Browns team that didn't look very good or play very well, and, surprise, they didn't, because they're a bad football team. In the end, it was a 22-17 loss in an ugly, rain-soaked game that will only raise more questions about the future of the franchise.

Right or wrong (wrong, probably?), the Eagles aren't going to bench Carson Wentz. They are tied to him through at least the 2022 season, and the easiest path to contending again is if Wentz somehow snaps out of this funk that he is in.

But how much longer can they watch him play the way that he has played this season? On the day, against a shaky Browns defense, Wentz was 21 of 35 for 235 yards, 2 TDs, and 2 INTs. He was lucky to only be intercepted twice.

In his post-game press conference, Doug Pederson was peppered with questions about benching Wentz. Pederson said that he didn't consider benching Wentz during the game, and that Wentz will start next Sunday. When asked if he had the authority to bench Wentz or if a second or third party had to also turn their key, so to speak, Pederson didn't answer the question directly, and instead said that pulling Wentz would signal to the team that he was waving the white flag on the season.

Many would counter that benching Wentz could potentially save the season. Brandon Graham gave something of a telling answer, when he was asked if benching Wentz sent a bad message to the team.

That doesn't sound like a player who would view such a move negatively. Whatever the case, there were already calls from the outside for Jalen Hurts to take over the offense. They're going to get a lot louder this week.

When will the locker room turn?

In the first quarter, things were looking up! The Browns went three-and-out on their opening drive, and the Eagles answered with an offensive line-dominant drive that went as follows:

One of the concerns about Sanders coming out of Penn State was ball security, which he put to bed to some degree his rookie season when he only fumbled twice all season. In 2020, Sanders has three fumbles on 119 touches, or one every 39.6 touches. His fumble on Sunday was a killer.

3) The 'Abandonment' Award: The run game

As you can see above, the Eagles ran it nine times on that first drive, and the fumble aside, they were very successful with it. So you'd think they'd stick with it, maybe?

Nope. They ran it 12 times total with their running backs on their last 12 drives.

Peters benefited bigtime when it was announced that Browns star DE Myles Garrett would be unavailable for this game because he was being placed on the COVID-19 list. No matter. Less talented players like Adrian Clayborn and Olivier Vernon absolutely wrecked him instead.

Near the end of the game, down 12, Peters came out, and Jordan Mailata came in. It felt a lot like Peters either got benched, or he took himself out. After the game, Pederson said Peters got hurt. I guess we'll see if Peters lands on the injury report this week.

Whenever Peters' career is over, he'll be in the Hall of Fame, and he'll go down as one of the great all-time Eagles. In 2020, however, he finagled more money out of the team in order to move from RG to LT, and has proceeded to play worse than the 23-year-old Australian who literally played his first snap of organized football in a real game two months ago.

Many would say Peters was already done. Well, he's done done then.

5) The 'What Happened' Award: Doug Pederson

At the end of the first half, coming out of the two minute warning, with the Browns facing 2nd and 7 from their own 23, Baker Mayfield was sacked by Josh Sweat. Now it's 3rd and 14.

Call timeout, Doug. Uh, Doug? The clock is ticking down. Timeout. Timeout, Doug. Is Doug not going to call a timeout?

As it turned out, the Browns let the play clock tick down to 1 second before calling a timeout of their own. 39 seconds wasted.

When asked after the game what the reasoning was for not calling a timeout in that circumstance, Pederson couldn't even remember the sequence. 😬

6) Why is Alshon Jeffery even on the roster?

OK, so that's not really an award. It's more of a serious question. Anyone? I'll listen.

During the week, Pederson said Jeffery's role would increase each week as the season went along. And it did! Last Sunday, Jeffery had 1 target and no catches. This week he had 2 targets (1 drop, 1 INT). What's going to happen next week? Is he going to make a catch and run the wrong way for a safety?

8) The 'Can ANYBODY Make a Play' Award: The Eagles' third down offense

They were 2 for 12 today on third down, which at least was an improvement over their 0 for 9 debacle a week ago. Progress! That would be 2 for 21 over the last two games. Actually, if you want to take it back even further, they're 13 for 62 (20.9%) over their last five games.

Forget Rodgers' two catches for 48 yards and a TD today. What I'll always remember fondly from this game was Rodgers' diving tackle attempt of Sione Takitaki.

10) The 'Good Lord, Just Put them Out of Their Misery' Award: The rest of the NFC East

The Eagles will still end this week atop the NFC East (lol), but their grasp is weakening.

The Football Team won, the Giants had their bye (we'll call that a win), and the Cowboys are (checks the Cowboys score) up by 2 on the Vikings (they'll probably blow it).

Will one of these crap teams become competent enough to overtake the Eagles and leave them in the dust? I think that would be best for the city, but sports books see it differently, as Philadelphia is still still favored to win, according to TheLines.com).