There's no hope for these Eagles, they are who they are

After Doug Pederson said he's not benching Carson Wentz, it's hard to see anything changing. 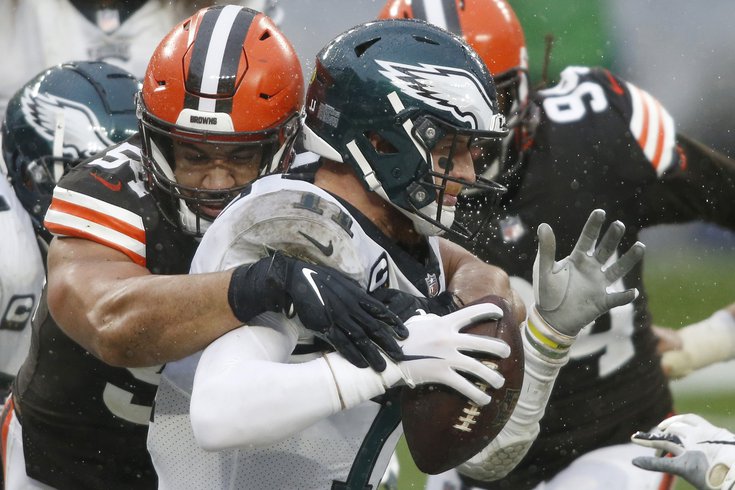 Carson Wentz has been one of the worst quarterbacks in the entire NFL this season.

Every week, leading up to an Eagles game, as players return from injury and as the NFC East looks more and more pathetic, fans (and it seems, the team itself), fool themselves into thinking "it could be different this weekend."

After all, Carson Wentz did — not too long ago — perform like an MVP caliber quarterback. And the defensive front has a ton of talent. And Big Balls Doug is changing the way football is played with aggressiveness on fourth down.

And then every week, it's exactly the same. The Eagles lost 22-17 in Cleveland Sunday (but it really wasn't that close), dropping to 3-6-1, still the best record in the NFC East.

The 2017 Super Bowl run seems like a mirage, and a vestige of a different iteration of the Philadelphia Eagles. Wentz, who should be in his prime, has regressed with the ball in his hands in a big way. The offensive line gives him no time. The team turns it over constantly and Doug Pederson makes positively dumbfounding decisions regarding game management and play calling.

All of that combine to make the 2020 Eagles pretty much unwatchable.

Whether they fall ass-backwards into a division title that a team twice as good wouldn't be deserving of, or — as would be a better fate for the longterm future of the franchise — land a top 10 pick in the upcoming NFL Draft, there is really no reason to expect this team as constructed to make any kind of in-season improvements anymore.

Two Wentz interceptions and a sloppy Miles Sanders fumble in the early rainy conditions Sunday afternoon really did the Eagles no favors, but the team — like it did a week ago coming off their bye — did not look prepared yet again. Mistakes, like those turnovers, costly penalties and the inability to convert on third down, cost the Eagles in Cleveland.

"We have to coach better," an unexpectedly chatty Pederson said after the loss when asked about his teams inability to correct the same mistakes they spent all week talking about needing to correct. "It says we have to play better, we have to pay attention to our jobs plain and simple. These games come down to three or four plays and that's kind of what this game today came down to, about four plays that were mistakes by us — the turnovers, costly penalties — so we have to fix it."

Take perhaps the biggest story (at least on the positive side) this year in practice squad graduate Travis Fulgham, who burst on the scene and appeared to be one of the best receivers not only on the Eagles but in the entire NFL. The wideout made 29 catches for 435 yards and four touchdowns in Weeks 4-8. On Sunday, he had just one catch for eight yards against the Browns and was targeted seven times.

Fulgham was seemingly replaced on Wentz' friend list by third-string tight end Richard Rodgers, who stepped up and caught two clutch passes for 48 yards and the Birds first touchdown. He played well last week as well.

It's not entirely Pederson's fault, but 96 yards rushing in the first half of Sunday's loss gave way to six rushes for 10 in the second, with the Eagles firmly in the game until Kareem Hunt found the end zone early in the fourth to make it a two-possession lead. Abandoning a potent run game has been a theme this season, as has the injury bug which bit hard Sunday too.

Lane Johnson, Jason Peters and Cre'Von LeBlanc joined the ranks of over a dozen key Eagles players who have been injured this season — with Jason Kelce and Derek Barnett missing snaps as well with injuries of their own.

The play-calling has been suspect at best, with a punt on a key fourth down late in the first half leaving Eagles fans wondering what happened to the man who helped his team to the Super Bowl by dialing up trick plays in big spots and never being afraid to go for it on fourth down.

The Eagles are what their record says they are — not what their place in the division says, which ridiculously remains first place in the NFC East (a division they're still favored to win, according to TheLines.com).

In any normal season, they would be in rebuild mode and looking at what they have in youngsters like Jalen Hurts and Jordan Mailata. In any abnormal season, the Eagles would look at the Seahawks, Packers, Saints and Cardinals upcoming on the schedule and be prepared for the final nail in the coffin to be driven home. But this is 2020. And an 0-5 stretch will likely do little to eliminate the Eagles from playoff competition, as a 5-10-1 mark (with wins over Dallas and Washington in the last two weeks of the season) could be potentially playoff clinching — their rivals in the division have tough slates ahead too.

"We are where we are because of the mistakes we have been making, coaches and players," Pederson said. "This will be a great test for our football team, this will be a great sign to see who's in and who's out, and that's the message to everybody, that's just where we are. It's ... really challenging the leadership of the football team, challenging the coaches, challenging the guys to keep this thing together. There are six football games left and we have an opportunity in our division but it's really going to challenge us all moving forward."

The Eagles may be one of the three or four worst teams in football. Wentz may be having the worst season of any QB in the entire NFL. And yet, they control their own destiny.

And it's safe to assume nothing will change anytime soon. Including the starting quarterback.

"I think if you get to that spot where you don't start him or bench him, you're sending the wrong message to your football team that the season is over," Pederson said, "And we have to work through this. When times get tough, that might not be the easy thing to do. This business is about work, it's about detail and having ownership, things I talk about with the team and that's what we have to do. It's not about one guy. This sport is bigger than one guy, we all have a hand in it and we all have to fix it."

The question is, can they?