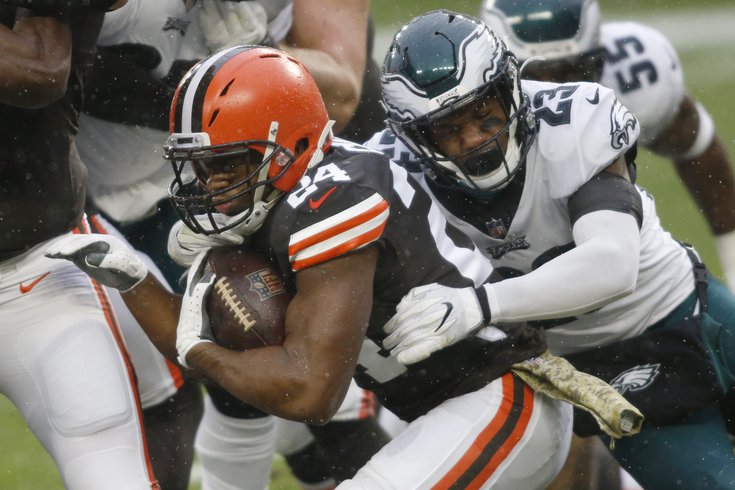 The Eagles had another miserable half of football on offense Sunday, and they head into halftime down 7-0 to the Cleveland Browns despite the defense not giving up any points.

Here's what I saw through the first 30 minutes on Sunday.

• As bad as Philadelphia's pass defense was throughout the first half, hats off to the Eagles up front. They were up against a tough offensive line for Cleveland, and they didn't allow Nick Chubb to get much of anything going on the ground.

They really came through with their back against the wall in the red zone, and Philly got contributions from everybody to stop the Browns short of the goal line on Cleveland's second drive. Cornerback Jalen Mills came up with the initial hit, and the defense swarmed from there to stop Cleveland short of the goal line and give the offense a shot to make something of the opportunity.

On any other team, it's a feel-good story and the kickstart the team needs to get rolling. I'll let you take a wild guess whether they cashed in or not.

• There are some nits to pick in the secondary (particularly with Avonte Maddox) but Jim Schwartz's unit did a heck of a job to keep this game close in the first half. Cleveland is built to neutralize the best unit the Eagles have on defense, and they still managed to stop the run and put pressure on Baker Mayfield anyway.

• The Eagles didn't get punished for it, but the pre-snap penalty on Derek Barnett on drive No. 1 for Cleveland is just a perfect snapshot of this team. You do everything right on the first two plays, and then a simple mental mistake gives the Browns two separate chances to convert. He was fortunate to get bailed out by good coverage.

• Philadelphia's first drive of the game was red meat for the fanbase. After Carson Wentz stepped up in the pocket and completed a nice 22-yard throw to Dallas Goedert early in the drive, Doug Pederson did what many have begged for him to do throughout the season and ran the ball. On a rain-soaked afternoon, the Eagles kept pounding the rock, picking up 49 yards on the opening series with the 1-2 punch of Miles Sanders and Boston Scott.

But once they got close to the goalline, Sanders' ball security issues reemerged, with the Penn State product coughing up a golden opportunity inside the five-yard line.

Karl Joseph recovers the fumble and it's our ball!

Even when things are going well and the coaching staff sticks to a philosophy people are pining for, the Eagles find some way to shoot themselves in the foot. That's the sign of a bad football team.

• The Eagles certainly appear to have made the wrong personnel bets on defense last offseason, particularly on defense. The more we get to see Avonte Maddox play outside corner, the more it becomes clear that outside corner remains a need despite their acquisition of Darius Slay.

Maddox got absolutely torched on two separate plays on Cleveland's second drive, the big one a deep throw over the middle where he was just completely caught off guard by tempo from the Browns. But you could argue his bigger blunder came on a play-action bootleg closer to Philadelphia's endzone, where the entire defense bit so hard that the only way to prevent a touchdown was Maddox trying to tackle a Cleveland receiver before the ball reached him.

(That turned out to be a very important penalty, so maybe I should cut him some slack. But since Cleveland only missed out on six points because Baker Mayfield sailed a throw through the back of the endzone, I'm less inclined to do so.)

• It's the same story every week with Wentz. He actually started well in this game, with a pair of nice throws downfield to Dallas Goedert and a sideline out to Jalen Reagor putting some wind in the quarterback's sails. And then he decided he was going to throw a swing pass to Sanders while under duress, and the end result was to be expected:

TAKITAKI TO THE HOUSE. #Browns @STakiTaki

The real issue on this play is not that Wentz threw the pick while being dragged to the turf — Richard Rodgers might as well have been me out there, wandering around not blocking anyone — it's that Wentz wasn't decisive enough to hit an open Jalen Reagor when he had a window to throw into.

At his best, Wentz plays instinctively, but he has spent most of this season looking like you can actually see him working through his decisions in real-time. For whatever reason, he is overly hesitant in a way he has not been even in the past two years, let alone when he played at an MVP level three years ago. And he's opening himself up for catastrophic mistakes by making smaller, less deadly mistakes before he gets to the moment of truth.

You want to know how much confidence the coach has in him right now? Josh Sweat picked up a big sack to put Cleveland at a tough third-and-14 with under two minutes to play in the half, and instead of banking on the defense to get a stop and give Wentz a chance for a two-minute drill, the head coach just let the clock run down, forcing Cleveland to take a timeout with 1:15 left. That's absolutely pathetic!

It's the same song and dance every game. He is not a guy who can lift this bad team out from where they are. That in itself says everything about who he is and what they have right now. It would have been hard for Philadelphia to be better and more committed to the ground game than they were in the first half, and the QB still found a way to screw it up.

• Jason Peters is an Eagles legend and a potential Hall of Famer, but there is no reason for him to play left tackle over Jordan Mailata the rest of the way. Enough already. This team continues to misunderstand what matters this year, and they're not even getting short-term benefits from their short-term focus. Ridiculous stuff.

• Jason Kelce was one of Philadelphia's best players in the first half, leading the way as a run blocker through the middle and with his trademark pulls to the outside. It was only a matter of time before he suffered an injury and a good thing died, and Kelce appeared to pick up some sort of left arm injury midway through the second quarter. Here's hoping it isn't too serious.

• Doug Pederson's decision-making process on when to go for it on fourth down and when not to go for it on fourth down continues to be absolutely maddening. There is absolutely no way he's doing this on the advice of "the math" or "the guys upstairs" because if he is every single one of them should be loaded into a cannon and fired back to a basic 101-level statistics class. There is no situation tailormade for four-down football more than a third-and-four from your opponent's 44-yard line.

Pederson deciding to punt the ball on fourth-and-four was infuriating not just because it was the wrong call, but because there is absolutely no logic to what they're doing in high-leverage situations. It's like when they went for two last week down four points in the second half to the Giants. They've gone from having an aggressive but coherent approach to playing scared a lot of the time and doing so in a way that isn't justifiable either by the odds or by gut feel for how to approach a football game.

This season sucks, and this coaching staff sucks right now. The fourth-down decision may have only been topped by the third-and-seven read-option play that no one seemed to be on the same page for late in the second quarter.

• Three offsides penalties in one half of football is absolutely ridiculous, and once again, it speaks to a coaching problem. This group has no discipline whatsoever.

• Maybe the Eagles should bring Jalen Hurts in for another play where they won't even pretend to give him the option to throw. Are they scared of hurting Wentz's feelings or something? Come on.