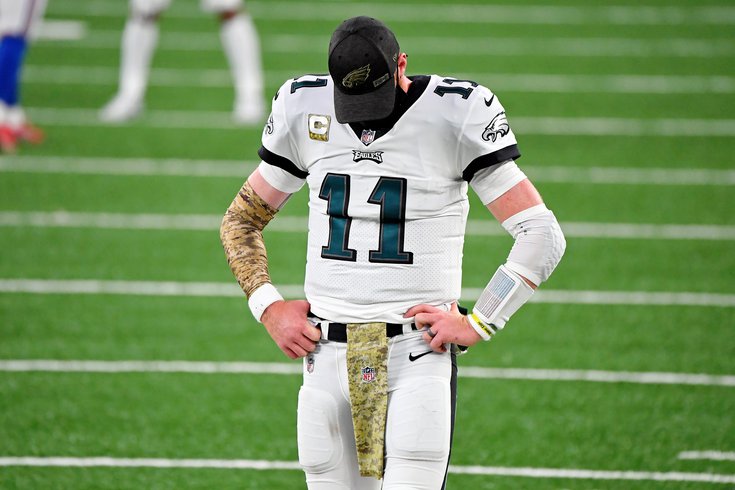 The Eagles might be stuck in a bad marriage but the kids aren’t leaving for college until 2022.

That said, you can almost hear the Thanksgiving Day conversations around the Delaware Valley, at least if it wasn't 2020 and people were allowed to have dinner with their families and friends.

So play along for this exercise.

For many, the once surefire future superstar should take a seat so we can see what Jalen Hurts has, the ageless mistake of assuming the unknown is the magic elixir to cure a host of ills, in this case, a head-spinning number of moving parts on the offensive line, receivers who too often can't get off press coverage, and running backs who treat outlet concepts and blitz pick-ups as optional to their job descriptions.

Doug Pederson hasn't wavered, claiming benching Wentz didn't cross his mind in an ugly 22-17 loss to the Cleveland Browns on Sunday and quickly naming the embattled fifth-year starter as the guy again, a week from Monday night against Seattle and Russell Wilson.

“With the way the game was going and the elements and we were just really a score from putting ourselves back into this football game, I did not consider that,” the coach said when asked if a seat was being considered for Wentz.

While Pederson has often said he's wed to Wentz, some speculate that those who really set up this shotgun wedding back in 2016, Jeffrey Lurie and Howie Roseman, wouldn’t even allow an amicable divorce in the form of a benching.

Pederson didn’t address that directly but it’s not rare in the NFL for an owner or a GM to get involved when it comes to decision-making regarding the so-called face of the franchise.

Either way all of this talk is moot.

For those who pay attention to the salary cap, moving on from Wentz is not even a possibility until 2022 unless you want the stain of the world's highest-paid backup on the resume.

What is true is that professional football is supposed to be a meritocracy, one that often gets muddled by things like pedigree and reputation. Ultimately the best players usually win out at some point.

Take the other side of the football Sunday in Cleveland where Alex Singleton was a one-man wrecking ball, further distancing himself from the well-traveled former undrafted rookie free agent who became a star in the CFL personal narrative.

The Eagles wanted Nate Gerry and to a lesser extent even Duke Riley and T.J. Edwards to be better but they're not and Singleton has kicked down the door with his opportunity, often looking like the best defender on the field against the Browns.

Wentz, meanwhile, finished 21-of-35 with two touchdowns and two interceptions, including a 50-yard pick-six to Sione Takitaki after a Richard Rodgers-missed blitz pick up turned a sure-to-be-misfired outlet to Miles Sanders into more of a pop-up.

Matching his career-high in INTs (14) with seven games to play Wentz is now at 107 turnovers through 68 games overall, an unacceptable number too often excused by the thought of aggression and the siren's song of the big play.

The Eagles shouldn't bench Wentz, however.

In Pederson's mind, it's because the NFC East is still in play, and sitting the starting QB is the wrong message to send.

“Look, I think if you get to that spot whether you don’t start him or you bench him, I think you’re sending a wrong message to your football team that the season’s over and that’s a bad message,” Pederson claimed.

With Washington and Dallas winning Sunday, suddenly all four teams in the NFC East have life with everyone, including the New York Giants, at 3-7 and a half-game behind Philadelphia. Moreso, with the WFT set to play the Cowboys on Thanksgiving Day, anything other than a tie means Philadelphia will have to beat the Seahawks to stay in the pace car, something the Eagles never do.

“We have to work through this," Pederson surmised. "When times get tough, sometimes [benching the QB] might be the easy thing to do. This business is about work, this business is about detailing, having ownership, things I talk about with the team. That’s what we gotta do. That’s coaches and players. That’s not one guy. It’s bigger.

"This sport is bigger than one guy. We all have a hand in it and we all have to fix it.”

There are far bigger reasons to keep Hurts in shrinkwrap, though.

Once the artificial high of change runs its course, the crash is the reality that Hurts isn't going to stop the revolving door on the OL especially after the Eagles lost Lane Johnson and Jason Peters in-game again against the Browns and now even Jason Kelce is fighting through things after hurting his left elbow, strapping on a brace and allowing Isaac Seumalo to buckle up his helmet to get through the game.

The receivers aren't running routes or beating press coverage much better for Hurts, nor are the RBs embracing attention to detail.

In fact, if anyone really believes Hurts has a future in Philadelphia the last thing they should want is his confidence getting sacked under the weight of unrealistic expectations sprinkled with a copious number of sacks.

If you want to play out the string for a better draft pick, get Nate Sudfeld dressed and let him play crash-test dummy.

The Eagles might very well be stuck in a bad marriage but both sides have to keep it together until the kids get out of the house in the form of tenable salary-cap medicine after next season. By then, Hurts may have a chance if he continues to develop and the Eagles start making better personnel decisions or Wentz could rescue his own career.

Those are the multiple paths Roseman envisioned when shocking the NFL world by taking Hurts at No. 53 overall back in April.

“First of all, media, you guys can ask whatever questions you want,” Wentz said. “I know that’s part of the deal. I know that’s always a scrutinized position, playing quarterback and that’s what I signed up for when I came out and played quarterback going back to high school.

For now, Wentz can continue to “wear it” but the clock has officially started ticking.