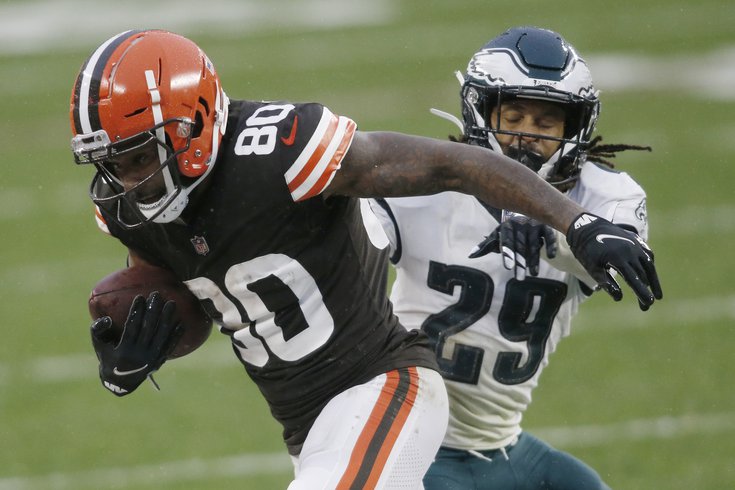 Avonte Maddox is not an outside corner.

In their Week 11 loss to the Cleveland Browns, the Philadelphia Eagles played 68 snaps on offense, and 67 on defense. Let's just get right to the snap counts.

Analysis: The status of Wentz going forward will be debated heavily all week (and beyond), so we'll skip that here. Hurts rushed once for 6 yards, and as usual, Wentz remained in the game and lined up outside on the play for no good reason.

Give Hurts a series! Really, what's the downside? If he's bad, the quarterback controversy calms down. If he's good, then hey, maybe you have a good quarterback. But at least give yourself a glimpse of what he is. You took the guy in the second round, ffs.

Analysis: Seumalo's return to the lineup resulted in the ninth different offensive line combination in 10 games. Let's go ahead and update those:

Both Peters and Johnson did not finish the game. Johnson left with a shoulder injury. No injury was announced for Peters. Doug Pederson was asked if Peters took himself out of the game, and Pederson said it was an injury.

Driscoll went in initially for Johnson, but was soon after replaced by Mailata. The assumption here is that Driscoll got hurt. If so, he has an abnormal number of injuries relative to his snap counts this season.

Overall, nine(!) offensive linemen played. Depending on the status of Peters and Johnson (Peters should be benched regardless, but won't be), we could have starting combo No. 10 in 11 games Week 12.

Analysis: Eagles receivers had 18 targets. They made 8 catches for 69 yards and no TDs. 3.8 yards per target. Fulgham had 1 catch for 8 yards on 7 targets, mostly going up against Denzel Ward, who had him on lock.

The Eagles used a roster spot on Jeffery for the first 10 weeks of the regular season instead of putting him on the PUP list, where he wouldn't have counted. Now that he's actually getting into games, he is providing negative value. His 2 targets on Sunday resulted in a drop and an INT. There's no good reason to continue to have him suit up on Sunday.

Analysis: The tight ends were actually quite productive in the passing game: 8 targets, 7 catches, 125 yards, 2 TDs. Of course, a Richard Rodgers' missed block helped lead to a pick six.

Analysis: Josh Sweat and Fletcher Cox each had a sack. We got a little glimpse of "elite-level Cox" on his sack fumble that led to an Eagles TD. Overall, the D-line until created adequate pressure, and did a good job against the Browns' outstanding rushing offense.

The one big play the Browns did get on the ground was a "welcome to the NFL" moment for Joe Ostman, who learned that thudding fourth string scrubs in training camp isn't quite the same as tackling Nick Chubb.

That 54-yard run aside, the combo of Chubb and Kareem Hunt combined for 71 yards on 32 carries.

Analysis: Singleton had 11 tackles, a sack, and a fumble recovery that he tried to scoop and score. While his play was encouraging, and he shouldn't lose his job whenever/if Nate Gerry returns, the Eagles still clearly need linebacker help.

Analysis: Here's what Howie Roseman said about Maddox back in March.

Having watched the first 11 games of this season, I think we can all see that Maddox is not an outside corner. He can be fine as a slot corner, or maybe as a safety, but CB2 is major need this offseason, as always.