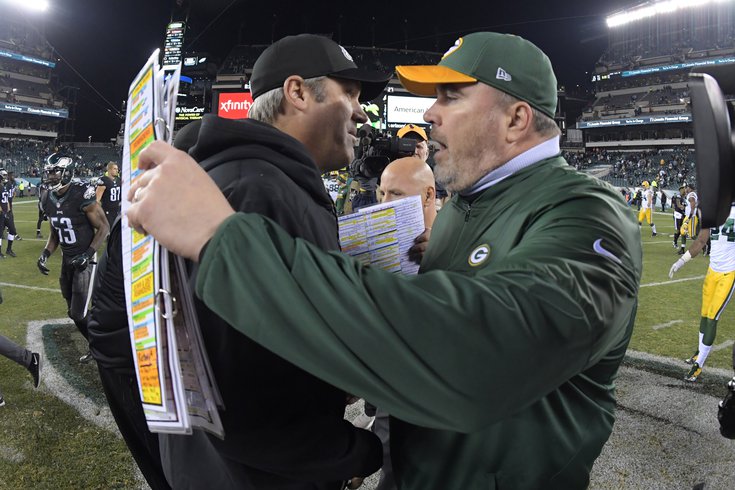 Week 11 of the NFL season is in the books, and we have no new obituaries to write. Sadly, all four of the garbage teams in the NFC East remain alive, and probably will for a while. We'll take a deeper look at which of those four teams are likeliest to emerge as divisional champs, only to be stomped in the wildcard round of the playoffs. 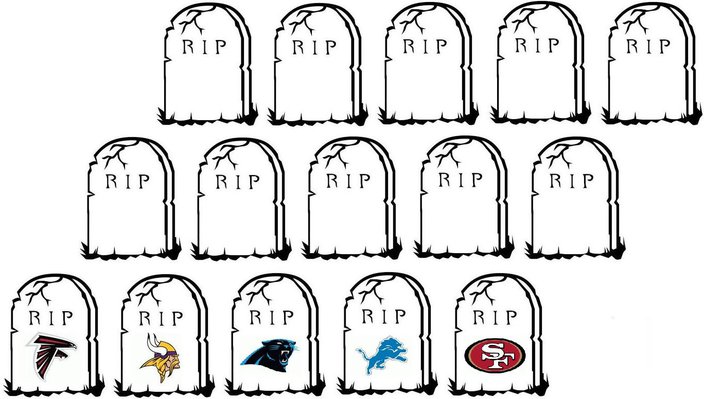 Unless the Football Team and the Cowboys tie on Thanksgiving, the Birds' reign atop the NFC East will disappear for the first time since before their win over the 49ers Week 4. One of those teams will be 4-7 (.363), and will be beating the 3-6-1 (.350) Eagles by percentage points. As most of us are aware, the Eagles' schedule is very hard over the next four weeks:

All four of those above teams will be playing for playoff positioning, and will not be taking the Eagles lightly. And then the Eagles finish up with games in Dallas and at home against the Football Team, which obviously aren't gimmes, seeing as the Eagles are playing like a bottom five NFL team right now.

Because the Cowboys and Football Team figured out a way to beat teams outside of the NFC East in Week 11, the Eagles' odds of winning the division at 5-10-1 shrunk substantially, as it feels likely now that at least one team will find a way to win three more games over the last six weeks of the season. When you look at the NFC East's teams' remaining games, there are ample opportunities for wins for the Giants, Football Team, and Cowboys:

• Giants: The Giants' most realistic path is to beat the Joe Borrow-less Bengals, the Browns, and the Cowboys. Football Outsiders has the Giants as the most likely NFC East champ right now at 33 percent:

In my view, their path to an NFC East title is more difficult than the Football Team's or Cowboys' paths.

Can they win three of those? If so, they'll be in good position.

• Cowboys: The Cowboys have the easiest schedule, in my view, and by a wide margin, as they have five games against bad teams:

In other words, the Eagles are going to have to win one of their four difficult matchups against the Seahawks/Packers/Saints/Cardinals, and then also win their two remaining games against the Cowboys and Football Team. Good luck with all that.

There's a strong possibility that the Eagles finish last in maybe the worst division ever. If so, it'll be extremely difficult to justify anything other than a complete rebuild.

10) Football Team (3-7): If the Football Team wins the NFC East, they'll maybe take a step in the right direction by winning the worst division maybe in NFL history. Talk about low bars, but hey, it's something. Of course, if that does happen, and they get blown out in the first round of the playoffs, they're picking 19th, where the best quarterback prospects will already likely be gone. And they kinda need one of those.

9) Giants (3-7): Mike Silver of NFL Network isn't exactly Walter Cronkite, but if you're looking for a fun thread that raises serious questions about the Giants' leadership, well here you go:

THREAD: 1) As @KimJonesSports reported, the incident that led to the abrupt firing of Giants OL coach Marc Colombo did involve Colombo calling HC Joe Judge a very dirty name. However, tensions began weeks earlier after an incident on the practice field...

8) Cowboys (3-7): Did you hear? Mike McCarthy is now a genius because he smashed watermelons with a sledgehammer on Saturday night before the Cowboys' win on Sunday over the Vikings. He was quite proud of himself, as this article from Todd Archer of ESPN shows:

"It was just all part of the messaging," McCarthy said. "We had a number of points of emphasis that we were trying to hit, so a number of guys got to participate, and once again I'd say it was a lot of fun. It was well received...

"I've always tried to be creative throughout my time and I've been doing it a long time, so you are looking for new ideas, keeping it fresh."

Usually when you don't really have anything to say, you distract from that by creating a diversion... like Gallagher!

I'd love to hear the actual points of emphasis that went along with the watermelon smashing.

"When the other team is on offense, we're gonna tackle the guy with the ball!" (Smash!)

"Or if you're the quarterback, throw the ball to a guy with the same color jersey as you. But not to one of the really big guys though." (Smash!)

In fairness, that's probably better than the messaging from the Eagles' staff this year.

7) Bears (5-5): Please lose to the Packers this Sunday so I don't have to write about you anymore, Bears. K thanks.

Did hands go unshook? You bet they did!

5) Cardinals (6-4): Kyler Murray is obviously very talented, but there were a couple plays against Seattle on Thursday night that really show his need for more experience in the NFL before he'll be viewed as an elite quarterback.

The first was at the end of the first half, trailing 13-7. The Cardinals were faced with 2nd and 4 at their own 44. Murray kept it on a zone read, easily had a first down, but slid a yard (or maybe even two yards) before the first down marker.

They didn't convert the ensuing 3rd and 1, and punted. The Seahawks then quickly drove down the field and got points of their own before the end of the half. Points swung in favor of the Seahawks because of the mistake to slide there.

In the fourth quarter, down 2, the Cardinals had a chance to take the lead, but were starting their drive at their own 14. They called a screen, which wasn't there, and Murray wasn't aware that he had to at least throw the ball past the line of scrimmage, which he could have easily done, to avoid an intentional grounding call.

Brutal. The officials made the easy grounding call, which made it 2nd and 22. On the next play, the Cards got called for holding in the end zone, resulting in a safety. Again, a huge swing.

Murray is going to be really, really good, but his game awareness has to improve.

4) Rams (7-3): The Rams had a very easy schedule through the first half of their season, beating all four scrub NFC East teams, plus a win over the mediocre Bears. As such, it was very easy to ignore them at 5-3.

But, with wins over the Seahawks and Bucs the last two weeks to start the back half of their season, the Rams are now in first place in the NFC West.

And that goes to show how bad the NFC overall is. It's not just the NFC East.

During the Rams' win over the Bucs, with the score tied, 2:46 left in regulation, and facing a 3rd and 8 from the TB 22 yard line, Sean McVay called a run play, happy to settle for a field goal attempt, with a kicker they just signed who had already missed a 44 yarder earlier that night.

That's equal parts cowardice and distrust of your starting quarterback. Ultimately, they were gifted an awful INT by Brady (as shown above in the Bucs section), and hung on for the win. But Good Lord, what an insanely gutless call, regardless of the outcome.

This team would be the 2 seed in the NFC if the season ended today!

3) Seahawks (7-3): The Seahawks' upcoming schedule over the next four weeks:

If the Seahawks had their choice of opponents the next four weeks, it wouldn't look much different than that! Maybe they'd sub in the Jaguars somewhere? Or maybe not!

2) Packers (7-3): The Packers' loss in Indy hurts from a first-round bye perspective, but they're still going to waltz to a divisional title.

Remaining strength of schedule: .467, with games still left against the Eagles, Panthers, Lions, and Bears x2.

1) Saints (8-2): In case you missed highlights of Taysom Hill's first start at quarterback for the Saints:

Hill was better than I expected as a passer, going 18 for 23 for 233 yards, in what was a predictably run-heavy Saints attack (36 team rushes). I don't like their chances of making a playoff run with Hill as the QB, but for now, he's good enough to get through the easy stretch of games the Saints have before they host the Chiefs Week 15: