What they're saying: The NFC East is a slow-moving car crash and the Eagles are in the driver's seat

Carson Wentz and Doug Pederson have never been worse... 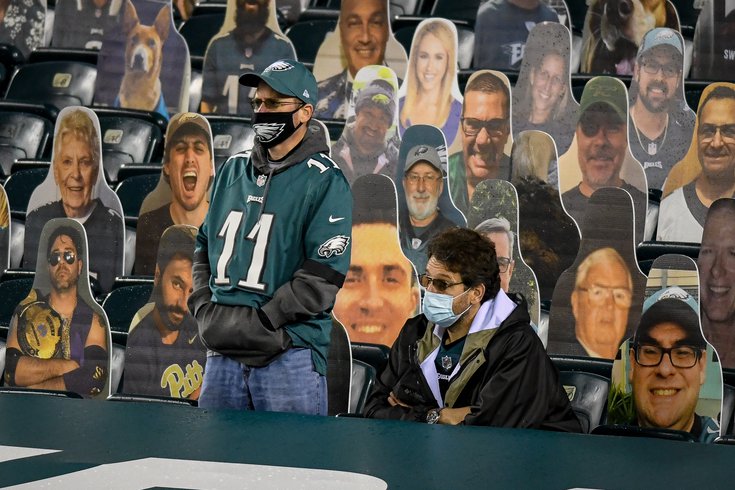 Soon that jersey will be available for $5 at your local Modell's.

Technically, and perhaps only because the Eagles and Doug Pederson fell ass-backwards into a tie against the Bengals, Philadelphia is still favored to win the NFC East.

The standings will tell you that: they are the only team without seven losses through 10 games.

The numbers will tell you that: fivethirtyeight.com says the Birds have a 34% chance of winning the division, followed by the Giants at 25%, Cowboys at 23% and Washington at 18%.

The sports books will tell you that: TheLines.com's consensus odds say the Eagles are +140 right now, with the Cowboys at +300 and Giants at +350.

But reality says otherwise (and so does the Football Outsiders, which has the Giants favored at 33%).

And, across the world of NFL punditry, the experts and sportswriters who cover the sport for a living are ready to ignore the numbers and admit the truth — that Carson Wentz is completely unhinged in his terribleness, Pederson lost his magic years ago and the Eagles could be one of the four or five worst teams in the entire league.

We won't ask you to take our word for it — though we've made it clear that any expectation of success in any way shape or form this season is a complete prayer. Instead, we'll tell you what they're saying about the Eagles after yet another disheartening loss in Week 11.

We'll begin the bloodbath with a piece from The Athletic that takes a peak at the six NFL division races like they're elections — determining which are too close to call and which are close to being decided. And then there's the NFC East, which is completely up for grabs.

The race to six wins is on.

The worst division in recent memory is also the NFL’s tightest division race, and none of these teams really deserves to win. But someone will win, and it’s not likely to be the Eagles, the team technically atop the standings right now, thanks to their tie against the Bengals earlier this year.

With a race this tight, we can’t rule out anyone yet. But the Eagles are spiraling, and it’s now almost impossible to defend quarterback Carson Wentz outside of a handful of throws each game.  [The Athletic]

Every week, The Ringer's Roger Sherman picks out winners and losers from the previous slate of NFL games and perhaps with the intent of being comical, he picked the NFC East out as a Week 11 winner. It's probably funny to everyone who doesn't have to watch their favorite team play in the division. With every team boasting three wins (in 10 tries), Sherman is high on the entertainment value to come from watching the division play itself out.

He also throws a stat that is sure to make even Carson Wentz apologists feel cautious, that Wentz "seems determined to become the first player since Blake Bortles to pull off the Triple Frown of quarterbacking: He leads the league in interceptions, sacks, and fumbles, and added two picks, five sacks, and a fumble against Cleveland."

Here's more on the NFC East from Sherman:

This is by far the most competitive division in football, and also the worst. The Eagles currently hold the lead, because a tie counts for half a win and half a loss. But they’ll probably lose that lead on Thursday, since 3-7 Dallas and 3-7 Washington will play in the Cowboys’ annual Thanksgiving Day game. Whoever wins that game will move to 4-7 and have a .363 winning percentage, which edges out the Eagles’ .350 winning percentage. I’m already thankful that we all get to watch the race to clear the NFL’s lowest hurdle.  [The Ringer]

The road to come

So all four teams have a pretty good chance of winning the NFC East. But for whom is the road hardest, or easiest?

Well, the Eagles have the worst schedule left by a large margin, which could have as much as an impact on their fate as their horrible play recently. To get to the six wins mentioned by The Athletic's Lindsay Jones earlier, Philadelphia will need to beat either the Seahawks, Packers, Saints or Cardinals in addition to beating both the Cowboys and Washington at the end of their slate of games.

Here's more from Marc Narducci on the tale of the tape in the NFC East's remaining schedule:

Washington has the most difficult remaining schedule among the Eagles’ division opponents, largely because of Pittsburgh’s 10-0 record. The other five teams Washington will face have a record of 23-26-1.

The winner of the Thanksgiving game (assuming there is a winner and not a tie) between Washington and Dallas will move into first place.

It must be mentioned that none of the NFC East teams has earned a victory over a team that currently has a winning record.

The Eagles will play their next four games against teams with winning records.

It won’t get any easier, although nothing has come easily anyway for the Eagles, who were in command of this weak division and now have allowed everybody else to jump back in the race.  [Inquirer.com]

It could (and will) be worse

In a very lengthy, thorough and scathing look at the Eagles' path to competitiveness in the years after 2020, Solak hits Eagles fans with a bitter taste of reality and a rebuke of the current power players in the team's front office. We highly recommend taking a look at the piece, which dives into roster construction issues, the salary cap hell on the horizon and the horrible draft day mistakes which have caused our current misery. Here's a brief taste:

But here, the proof of the pudding isn’t in the eating. Playoff berths are nice on paper, but have been underwhelming in experience. Wentz has gotten worse in consecutive seasons, bottoming out in 2020 as a cellar-dwelling quarterback in all significant metrics, let alone the agonizing eye test. Pederson’s offense has similarly spiraled, at times dragging Wentz down with its incongruity and rigidity, at times plummeting under the weight of Wentz’s erratic decision-making and vanishing accuracy. Both the system and the quarterback are shackled by a roster peppered with retreads from successful seasons long past: Alshon Jeffery, DeSean Jackson, Jason Peters, Jason Kelce, Zach Ertz, Fletcher Cox, Malik Jackson, Rodney McLeod, like songs on a playlist you loved in high school, and wonder now how you didn’t rip your eardrums out of your head.

To this point, the Eagles have acted like a competing team — and even though they aren’t one, they technically still are one, so they will continue to cosplay as such. But if they fall out of the playoffs and into the Top-10 of the draft order, the haze of a division win will no longer obscure the long-festering issues on this depth chart. Then, and perhaps only then, will the potential for tearing it down come into play.  [BGN]

The city seems to be mixed on whether the team should ride things out with Wentz, or turn the ball over to second-round pick Jalen Hurts for an extended look. Aside from a collection of trick plays and using him as a decoy, the Eagles really have no idea what they have in Hurts, who was a star in college and has the skillset to play like Kyler Murray. With no preseason to give a glimpse into his demeanor and talent when leading an offense, and with the Eagles staring down the barrel of a lost season, perhaps this is the perfect time to make a move.

Doug Pederson said he was not changing quarterbacks — yet — but he may have no choice pretty soon. Even putting the potential of Hurts aside, there is another reason for Philadelphia to name a new starter sometime soon.

If anything, Wentz is getting worse. If that’s possible.

He makes mistakes and then compounds them with more mistakes, and week after week you can just see him losing confidence as the mistakes add up.

The quarterback we saw face the Browns Sunday was a lost cause. There’s no way to watch that guy and think this is someone on the brink of turning things around. Someone who’s one big play away from finding his lost form.

He’s lost. And the coach and his staff have shown zero ability to get things turned around.

Wentz has played 10 games. Seven have been terrible. Three have been barely average.

There’s something terribly wrong here that’s not being fixed and what Wentz needs now is a chance to step away, catch his breath and try to recapture the magic that made him the NFL’s 6th-ranked QB over the last three years.  [NBCSP]