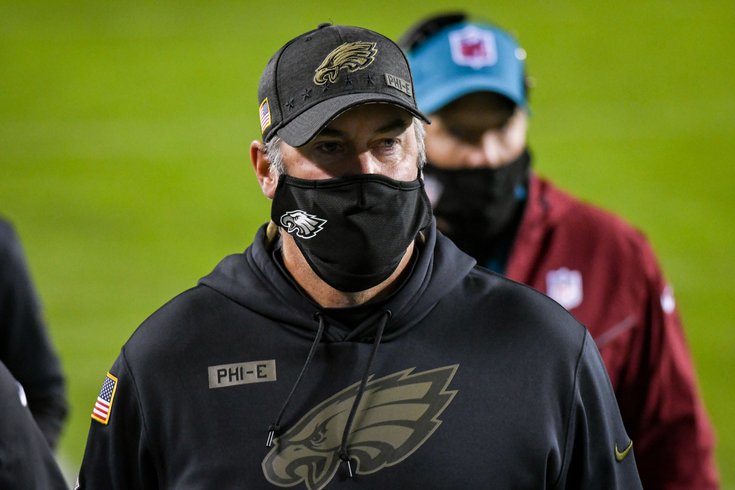 Every week during the regular season, we publish a "five matchups" article that essentially covers the strengths and weaknesses of the Philadelphia Eagles' next opponent. This week, that's the Seattle Seahawks, who the Eagles will host as five-point underdogs, according to TheLines.com. However, I think we're at the "who cares" point in this miserable Eagles season where matchups don't matter anymore.

You all kinda know what the Seahawks are all about this season anyway, right?

Instead, what we'll look at here are five "things" to watch from the Eagles' perspective as this season continues to go sideways.

In the Eagles' loss to the Browns last Sunday, down 22-10 with under two minutes to go, Jason Peters just wasn't in the game anymore. He hadn't been helped off on the previous series, and he wasn't being looked at by anyone on the medical staff. He was just standing on the sidelines.

After the game, Doug Pederson was asked if Peters had been benched, if he had taken himself out of the game, or if he was injured. Pederson paused initially, then said Peters had gotten injured.

On the team's first injury report on Thursday, Peters' name was absent:

Given that Peters has taken himself out of games in the past, one doesn't need to take much of a leap to suspect that he did so again last Sunday, and Pederson was covering for him.

Peters is in his 17th year in the league. He's going to be in the Hall of Fame someday. He's been on some very good teams in his day, and this particular one is now 3-6-1, which doesn't accurately convey how truly bad they have been. So I can kind of get why he'd be inclined to quit on the final drive on a day in which he was, frankly, awful.

While there are certainly arguments that the team is better off losing their games down the stretch, what Pederson can't have are players quitting on games, or the season. One of the things Pederson can really hang his hat on the last few years has been the resiliency of his players. For example, when the team hit their rock bottom in 2019 at 5-7 after an embarrassing loss to the Miami Dolphins, the team rebounded, winning their next four, and in turn, the NFC East.

Part of the decision on whether or not Pederson will keep his job at the end of the season could be based on whether or not his team plays for him down the stretch, or if they just meekly fade away like a fart in the wind.

Pederson emphatically stated that Peters would start at LT on Monday night. In my view, that is a mistake, and not just on the premise that the Eagles should be getting a look at younger players, like Jordan Mailata. Pederson is a players' coach, which has served him well for the better part of his tenure in Philly, but I believe that not benching Peters was a missed opportunity to show the locker room that anyone and everyone is accountable for how they play down the stretch.

2) Can we see Jalen Hurts, but, like, in a meaningful way?

In his Wednesday press conference Pederson rambled when asked if Carson Wentz would start Monday night against the Seahawks.

Later, when a reporter oddly warned that the media would run with speculative stories based on that answer, Pederson stated plainly that Wentz would start.

There is certainly merit to the argument that Wentz should be benched in favor of Jalen Hurts. But even if the team doesn't bench Wentz, can Hurts at least get his own drive or two? You spent a second-round pick on the guy. May as well see if he can spark the offense in a meaningful way, as opposed to bringing him in for one 10-on-11 zone read play while Wentz remains on the field.

But beyond potentially sparking the offense, as my podcast partner Brandon Gowton pointed out, scenarios exist in which the Eagles could be picking top 5 in the 2021 NFL Draft. It's not often you pick that high in the draft, and if there's a quarterback available that you just can't pass up, don't you at least want to have as much information as possible before faced with that kind of decision? You know, again, maybe see what you have in Hurts?

3) Can a young leader or two emerge?

However, a number of young players played with heart, notably Brian Dawkins on defense, and Duce Staley on offense, and they became foundational players when the team transitioned from Rhodes to Andy Reid.

This team has some tried and true vets, like Brandon Graham and Jason Kelce, who are good players and emotional leaders, but who are the young players that will step up and prove that they can be part of a leadership core of the future if the team decides to just blow it all up? It's time for some young guys to take the reins from the old heads.

Why are the Eagles running quick screens to Greg Ward, when they just drafted a guy 21st overall who has some legitimately intriguing run-after-catch ability and explosiveness? It doesn't make any sense. Run those plays to Jalen Reagor. Get Travis Fulgham involved early. Give Alshon Jeffery's snaps back to J.J. Arcega-Whiteside, and see if there's anything salvageable there. Get John Hightower on the field for more than 5 plays, and see if he can make a big play down the field like he has on a few occasions already.

Guys like Ward, Jeffery, Richard Rodgers, and DeSean Jackson (if he comes back) are not part of the long-term future, so why are they so heavily involved in the game plan?

5) The Eagles have talked about "simplifying" the offense, but will they actually do it?

"We simplify because of some of the mistakes that we're making at the skill positions with some of the young guys," he said. "So, it kind of goes hand in hand with yeah we want to simplify overall, maybe for the quarterback position, but we're also simplifying for the rest of the offense so that guys can -- especially this time of year when fatigue and bodies are sore and the minds kind of get tired that we keep it simple for them also."

Jason Kelce explained the pros and cons of simplifying things.

"Simplifying things is a good way of playing fast and playing confident," he said. "I think that when it's something that you've done and had a million reps of, you know all the ins and outs, you know all the adjustments, you know how to operate those plays and make quick fast decisions, which, as a result make you play more confident and more aggressive. The downside of simplifying things is the defense certainly is going to be able to give tips and understand what's going on as well. So that's always a fine line we're battling as coaches, as players."

The Eagles should simplify things. Then again, they should have simplified things months ago. Of course, just because they're saying it now doesn't mean they'll actually do it. I mean, Pederson has been saying all year that he should be getting Wentz out of the pocket and on the move more, and then it never happens.

But at this point in the season, just line up and do the basics of what you do. Run what everybody in the offense knows, and can execute. If it works and the team wins some games and then the division, fine. If their talent just isn't good enough, then at least the evaluation of individual players becomes cleaner, and you can make better decisions on who stays and who goes, free from excuses about the scheme.