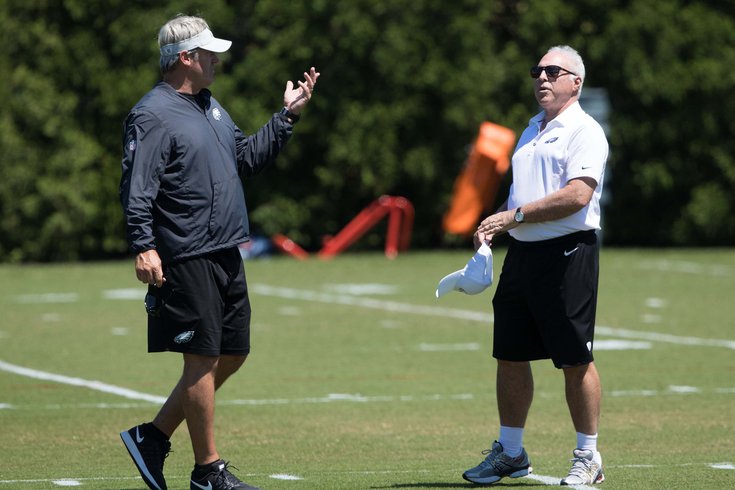 Daryl Morey could really just swoop in and take over the city. At this point it wouldn’t even take making the NBA Finals. The Sixers have put themselves in a position of teacher as opposed to clueless. A lesson Jeff Lurie could learn from **double checks notes** Josh… Harris? Yes.

The Eagles currently operate like a team with no vision. They don’t need a mission statement; they need an actual mission. If Harris can at least open himself up to bringing in people who are smarter than he is in running a basketball team, why can’t Lurie?

The owner of the Philadelphia Eagles has gone from doing the impossible to overseeing the unthinkable. It only took three years. This team went from being one of the greatest sports stories ever told to a laughingstock. It’s been three years!

None of it makes any sense. The same coach who made the playoffs three straight years – despite being decimated by injuries – is currently overseeing a total collapse in culture. The same quarterback who was the MVP – until injured – is now making Chuck Knoblauch look accurate.

The list keeps going from there. Right down – or up – to the GM who made some savvy moves to keep that roster alive during the run. Now? We watch as things fall apart. It’s not easy. I haven’t truly felt a loss this year after the Rams game. It was painfully obvious this team was not equipped to do anything special this year.

But like with everything, this starts from the top and trickles down. The theme of this year’s team is this awkwardness. Everything about this season has felt awkwardly off, from the press conferences to the game plans, right down to the execution. But most importantly, the roster moves seem – at times – downright ridiculous.

This entire season from owner to QB has been about this awkward justification of trying to ram a round peg in a square hole. The owner continues to allow his blind spot for the GM to remove all accountability for failing to address – once again – key positions on the roster. The GM’s arrogance continues to be reflected in Jalen Hurts existence on this team, then compounded by this ridiculous insistence that Hurts is used every week.

Seriously, this is a major issue this season and it’s definitely not year one of this mess. Alshon Jeffery had no business being on this roster despite being out of commission for so long. Jason Peters had no business starting at LT last week, but more of the same “He’s our guy and we are going with him.” Same nonsense we heard about Nate Gerry for so long. The defensive coordinator continues to hand pick players for his defense that seem to come up short. Speaking of which, putting a shorter CB like Avonte Maddux on the outside is another shortsighted move.

Remember Mack Hollins? They sat back and insisted this guy deserved every single shot, keeping people like Greg Ward from even seeing the field. Not only can they barely get talent evaluation right when bringing in people from the outside, but also struggle with recognizing who is on their team worth elevating.

This all adds up to a team that looks totally disjointed. The optics right now are pretty damning. Does anyone talk to anyone on this team? Every week we see a team that shows up to games like nobody spoke to each other for six straight days. At times, it looks like the offense isn’t even paying attention to the defense, or special teams for that matter.

Last week we saw a perfect microcosm for what’s truly eating this team, the lack of awareness and accountability that starts from the owner manifesting itself on the field. It came in the form of Carson Wentz taking a safety. It was brutal, yes, but spoke about what’s wrong with the Eagles on so many levels.

First, special teams continues to miss on fielding punts, putting the team in an unnecessary and avoidable hole. Then we see the actual play call asking Wentz to stay in the pocket. Problematic because Pederson has watched his QB struggle all season with holding on to the ball too long, and it put Wentz in a difficult spot. Wentz – in true 2020 form – did not disappoint, not checking out of the play – and instead followed the script and took the sack. Total failure.

It’s amazing that in three years we are back to asking the same questions we had when Chip Kelly was coaching here. Things like, “Does this team even practice?” and “What the hell do they do all week?” as well as “Are they even watching what the other side of the ball is doing?”

We have a lot to be thankful for in Philadelphia this year, watching a fall from grace at Lincoln Financial Field is certainly not on the list. Enjoy your turkey, and for the love of all things holy, keep the damn ketchup off the table!

Take the Eagles this Monday night on the line against Seattle. It’s about time the Eagles push back on the books and make some sharps a lot of money. Watch this thing continue to move in favor of Philadelphia, so no harm in waiting another day or two.

The Eagles have nothing left but (some) pride, plus they seem to play Seattle fairly well – when their starting QB isn’t knocked out of the game. DK Metcalf sparked some nonsense by fanning the flames of a QB controversy, as I think that goes a long way this week. I like the Eagles to cover the 5.5/6+ line. I’d actually take them down to 4.5. According to TheLines.com's consensus odds, they're currently five-point underdogs.

This week we highlight the fun with siblings on Twitter