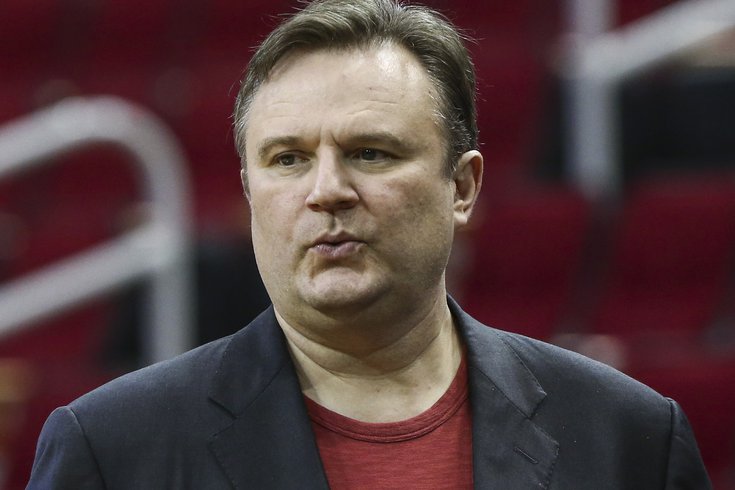 Daryl Morey's big night at the draft created quite a stir in Philadelphia, so much so that people have been thirsting for more moves ever since. Even when they get moves done, like the Zhaire Smith trade late Sunday night, there's an outside expectation that another shoe is about to drop.

Inside the organization, that hasn't really been the case. And during an interview with Anthony Gargano on 97.5 The Fanatic on Monday afternoon, Morey gave a pretty clear depiction of where they think the team is and how they plan to use the resources they have left.

While deals for their draft picks are not yet finalized, the Sixers are nearing the roster limit and still have some noteworthy needs, namely a backup playmaker and some bulk on the wing to ease the defensive burden on Ben Simmons and Matisse Thybulle. Gargano pressed Morey on whether they feel they have a "bucket getter" in-house who can stop runs or help close out games, and Morey said that while they may not, they weren't in a rush to resolve that issue right now.

"We don’t know what we have exactly. Obviously, new coach in Doc, championship and likely Hall of Fame coach when it’s all said and done for him. We’re going to learn about this team," Morey said Monday. "We have certain bullets, the tax midlevel, future draft picks, we have certain bullets we can use and I don’t really like using them now."

"In a month, the issues we see now, maybe the one you said is one of them, there’s going to be a different set of issues a month into the season. I almost guarantee it. We’re going to say, that’s not quite working, or the end of games isn’t quite working, and if we use the bullets now, we’re going to use them on the wrong ones, when the information is more clear as we get closer to the trade deadline and places like that."

It's a theme Morey has been hitting on throughout his short tenure with Philadelphia, dating back to his introductory presser with the team. Aggression has not been a problem for one of the league's most active dealmakers. Al Horford didn't so much as make it to training camp under a Morey-Rivers regime, and the Sixers attached a pick to Josh Richardson to get their hands on Seth Curry, a better fit on an excellent contract who can help Ben Simmons and Joel Embiid immediately.

The early days of free agency, however, are a breeding ground for bad deals. Think of it like NBA FOMO — teams are afraid to be left out as contracts fly and players come off of the board, so much so that they'll overcommit in dollars or years so they aren't shut out of the initial rush. As the market tightens and suitors come off of the board, that's often when you can find the best deals.

The only signing made to date was their agreement to bring in backup center Dwight Howard, a minimum salary deal that provides cover for Joel Embiid and defensive steel for the bench. Hardly a break-the-bank move, and one that fits within Morey's overarching plan.

"The main thing is," Morey said at his opening presser, "You want to do great moves when they are available. But often the best move is not a move that is done right away. We want to increase our understanding before we start to make those moves."

Weighing what the Sixers need vs. what they actually had available to them on the market is tricky, especially in the tight draft/free agency window we just saw unfold. DJ Augustin would have represented a nice upgrade for their bench at guard, but the Bucks gave him $21 million over three years, slightly out of Philly's range with the taxpayer MLE. Was splurging for a wing defender or some sort of backup forward worth it for the early part of the season, or could they get by with what they have (e.g. holdovers like Mike Scott) as they see what Embiid and Simmons look like carrying this new group?

Making the "easy" moves to improve their spacing is a good short-term upgrade that helps them better evaluate exactly what they have. Philadelphia's young duo hasn't played in a setup like this one since the early part of their second season together, pre-Butler trade, and it will represent our first chance to see just how much Embiid and Simmons have improved (or not improved) in the time since that deal was made.

There are relative strengths and weaknesses for both these groups, but the Curry-Green-Harris triumvirate has a higher floor and ceiling as shooters than the Redick-Covington-Saric trio did back then. Flashes of Embiid improving vs. double teams, for example, should show up more frequently and be rewarded more often with the expected new look. Sprinkle in spot minutes from guys like Furkan Korkmaz and Isaiah Joe, to say nothing of bigger contributions from Shake Milton and Tyrese Maxey, and suddenly there's more shooting and guard play than they've had around the Simmons/Embiid partnership in years.

Morey said Monday that there should be little confusion about how they're constructing the team. Any speculation about whether they'll move Simmons or Embiid, he says, should basically be thrown out. And Morey even made sure to refer back to recent comments from former Sixers GM Sam Hinkie in the process of shooting down big trade rumors.

"We have got to get rid of that noise," Morey said. "Ben and Joel, we’re building around them. We know with shooting and spacing they’re dominant."

"I think Sam Hinkie emerged from his groundhog hole, like he does once every four years, and he said it best  — look, fans went through 'The Process' to get these two guys. Why would people want to move off of them? I know we don’t, I know fans don’t, all the fans I talk to love Ben and Joel. Both of them, two superstars in their mid-20s, that just like never happens. There’s a reason Doc’s here and I’m here, let’s just be clear."

That's not to say I would rule out any additional movement for the Sixers prior to the season starting in late December. Sources with the team have affirmed Morey's stance, but wouldn't rule out more tinkering around the edges, moves in the same vein as the Smith deal on Sunday night. Being content with the current roster does not mean they're going to rest on their laurels and take a vacation until the 2020-21 trade deadline.

But the new Sixers boss has been pretty clear about how they'll go about this from the moment he was introduced to the public. They don't believe they can solve every problem in late November, nor do they plan to try.

"That is definitely what I like to do, sort of evaluate and then address the gaps as we get closer to the playoffs," Morey said Monday. "It sets us up to be less constrained in a whole bunch of ways so we can address whatever Doc thinks is the highest need on the team as we get gearing up for the playoffs."