Dwight Howard plans to sign a one-year deal with the Sixers at the start of free agency, a source confirmed on Friday night, shortly after Howard made an initial verbal commitment to stay with the Los Angeles Lakers. Shams Charania of The Athletic was the first to report the agreement.

ESPN's Bobby Marks reports the deal is for the veteran's minimum. The deal is fully guaranteed, a source told PhillyVoice.

It is an interesting development on several fronts. Howard's Philadelphia pact reuinites him with Daryl Morey, the executive who was able to lure him away from the Lakers for the first time eight years ago. He was more of a hot commodity back then, but the circumstances were arguably even weirder this time around, with Howard tweeting (and then deleting) he was coming back to L.A. in the opening hours of free agency. 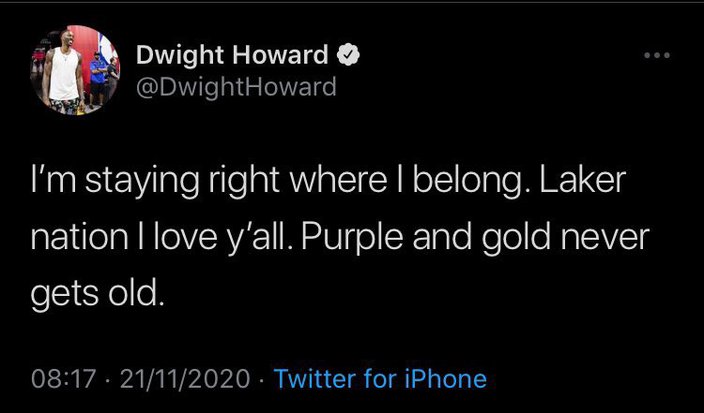 What happened from there? Chris Haynes of Yahoo! Sports reported late Friday night that the Sixers moved aggressively to bring in the veteran big man, with starting center Joel Embiid reportedly getting involved in the recruitment process of Howard.

Howard experienced something of a career renaissance with the Lakers last season, playing on a non-guaranteed deal that came about only after DeMarcus Cousins suffered an injury during the offseason. Howard far outplayed the value of his deal — setting a career-high in field-goal percentage at 72.9 percent, Howard was an excellent big off of the bench for the reigning champion Lakers, starting seven playoff games for L.A. en route to a championship.

MORE: Live NBA trade, free agency rumors: What's the latest on the Sixers and the rest of the NBA? | What needs do Sixers have left heading into free agency? | Source: Sixers to waive two-way player Marial Shayok

Much of that bounce-back year was due to buy-in. Howard was close to the end of his rope as an NBA player, but between his defensive efforts on the backline and a focus on keeping it simple on offense (something he rarely did during previous stops), Howard was a key part of the Lakers' bench. By focusing his energy on setting screens and rim running on offense, Howard was able to leverage the physical gifts he still has without bogging down offenses with post-ups, as he did historically.

How much of the offensive side translates to Philly? That's up for debate. As of this moment, they are fairly short on pick-and-roll handlers, though they expect to run that action a heck of a lot more with Doc Rivers coaching the team. Howard is not going to get the easy looks he did with the Lakers. That said, he will run the floor, and that will give Philadelphia's guards a big target and excellent finisher to hit in transition.

Howard should be able to duplicate a lot of his defensive success, and Howard's rebounding is an underrated part of adding him to the mix. Rim protection has always been a strength of his, but it's not a given that guys can combine it with rebounding the ball and ending the possession. His rate numbers as a rebounder were terrific last season — Howard averaged 14 rebounds per 36 minutes, and that's despite playing alongside guys like LeBron James and Anthony Davis in L.A.

There are certainly some concerns with Howard, who has a checkered health history and turns 35 years old in December. While he was able to stay mostly healthy last season, betting on him to do so again is a shaky proposition, especially when the starter is Joel Embiid, who you can bank on missing some games every year. There will be second guessing over whether they could have gotten a younger, perhaps even better option, especially after some rumors emerged connecting them to former Sixers center Nerlens Noel.

Those concerns are ultimately not that big of a deal under the terms of the contract, however. Last season was great proof of concept for a role-player version of Howard, a great talent who couldn't seem to find his place as he began to age. Able and willing to be an impact bench player for a title-winning team, you feel a lot better betting on him to do the little things and buy into a role once again.

At that price point, there's very little risk for Philadelphia.