What needs do Sixers have left heading into free agency? 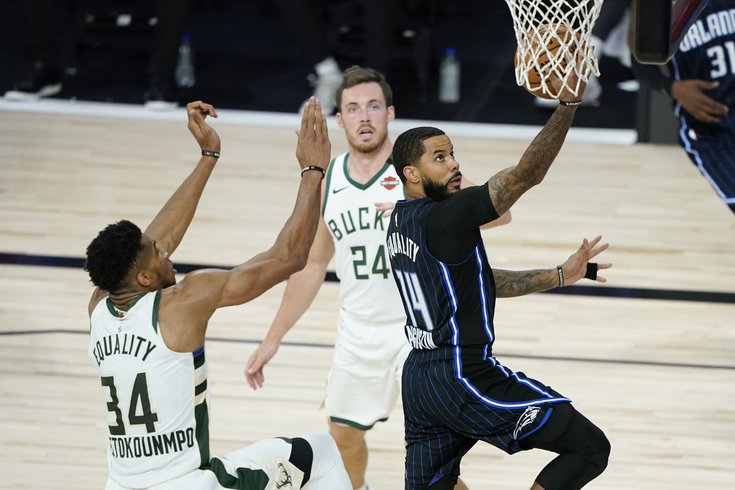 Orlando Magic's D.J. Augustin could be an option for the Sixers in free agency.

We've only just closed the book on the 2020 NBA Draft, and yet we're just hours away from free agency opening across the league. There's been plenty of activity already this week — including some deals that fell apart and are under investigation for illegal tampering — and the good news for Philadelphia is that they've managed to reshape the roster without warranting an NBA investigation. Progress!

As we wait for the rest of the pieces to fall into place, I wanted to take a quick second to take stock of what they have in place and what their needs appear to be before they can get to work in earnest. The Sixers are pretty happy with what they already have in place, but Daryl Morey was clear on Wednesday evening about how important this period is for the executive team.

"Honestly, it’s the busiest multiple weeks in my life and obviously a big part of my job and Elton’s job comes down to nights like tonight," Morey said post-draft. "And over the next few days in free agency. So it’s like a four-day window where our entire hopeful worth to the franchise will happen. So we’re very cognizant to deliver and that requires a huge amount of prep."

I'd venture a guess that prep work is far greater than mine, but here's a quick look at what's on hand and what might be in the pipeline.

Some notes on the above designations before we get started, which can change quickly depending on contract negotiations and such...

• Joe is much closer to a definitive bench player with an NBA contract than he is to being a two-way guy, in my opinion. Placing him in the undefined bucket with Reed (who feels like a more likely candidate to end up on a two-way deal) is just a conservative outlook for the time being.

• This exercise assumes the Sixers are likely to completely move on from all (or at least most of) of the veteran bench players they had on board last season, a list that includes Alec Burks, Raul Neto, Glenn Robinson III, Ryan Broehoff, and Kyle O'Quinn. It's not impossible that one or more of those guys returns, and since the team gave up draft picks for Burks/Robinson under Elton Brand's leadership, those two might be worth keeping a closer eye on, as Brand still has a decent amount of say in the front office.

• The acquisition of Dakota Mathias via a two-way deal signaled the end for Marial Shayok, who the Sixers decided to waive on Friday morning, a source told PhillyVoice. A team source told us the second two-way spot is still fluid, though the buzz seems to suggest that Reed is the most likely candidate.

• Without giving you a full-scale breakdown of their salary situation, know this — the Sixers are a tax team. That means in trades they are able to receive a maximum of 125% of their outgoing salary in any deal, plus $100,000. There are a number of mechanisms they have to be concerned with at the moment in order to avoid being hard-capped at the apron, a number they are barely under now with only 12 players under contract (11 if you're not counting Green yet). Any sign-and-trade, for example, would lock them in at the apron number (estimated at just under $139 million) for the rest of the season.

• Why is that last bit significant? Post-draft, the Sixers suddenly have a nice handful of salaries that could be useful in turning a few role players into a potential star deal down the road. Giving that possibility up would not be wise, save for the perfect player at the perfect price somehow falling into their laps.

I am reminded of a song from my very early childhood, "The Song That Never Ends," when typing that the Sixers need someone to hold down the fort without Embiid on the floor. As much as things change, they always stay the same.

There is reasonable urgency to get something done behind the franchise player, of course. With Al Horford on the move to Oklahoma City and the Sixers planning to waive Norvel Pelle, the next two options to spell Embiid are Reed (a raw prospect taken at the back of the second round) and Simmons, who should see time there in gadget lineups but certainly not anywhere close to full-time.

Good news for Philadelphia — the market is filled with decent quality bigs. One guy they could be in the mix for? Nerlens Noel, a Sam Hinkie draftee who Keith Pompey reports has some interest from the new regime:

Now, sources says, there’s a real chance Noel, 26, could reunite with the Sixers. Teams officially will be permitted to contact free agents or their agents at 6 p.m. Friday. Players will be allowed to sign free-agent deals at 12:01 p.m. Monday.

Like Pelle, Noel was a fan favorite in Philly. Noel was also Embiid’s best friend on the team. In addition, he and all-star point guard Ben Simmons are close friends and share the same agency, Klutch Sports Group. New Sixers president of basketball operations, Daryl Morey, has also been a fan of his playing style for some time, according to sources.  [Inquirer]

Stylistically, Noel is something much different from Embiid that fits into what we should expect Philly to do on both ends. He's the rim runner the second unit could use to succeed in Doc Rivers' pick-and-roll heavy attack and more importantly a rim protector with athleticism and length. Noel had some maturity issues during his first stint with the Sixers, but for all intents and purposes he settled in as a solid backup for Oklahoma City last season.

If they don't want to revisit the Process era, there are a ton of reasonably competent big men on the market this summer. One positive of the league transitioning away from the big man is that veteran bigs are available every year on the cheap. Just a few names on the market this summer that would work in some form or fashion: Dwight Howard, Bismack Biyombo, Alex Len, and John Henson.

(An unrealistic wild-card option — could the Sixers convince Marc Gasol to be Joel Embiid's backup? The 35-year-old would likely have better options in terms of playing time and money, and he has slowed down quite a bit the last few years, but maybe they'd like to revisit that whole "Embiid learns from a nemesis" deal without paying an exorbitant price to do so.)

This will probably end up being the more pressing need for Philadelphia, whether they end up filling it in free agency or in a trade down the line. The Sixers' current rotation looks a good bit better and more sensible than the 2019-20 edition, but they have the makings of a regular-season success that hits a wall in the playoffs.

This is as much about the top of the roster as it is about the guys on the bench. Barring a quantum leap forward, Simmons is going to run into creation issues in the playoffs again this season, the start of a domino effect for the whole roster. When you have a top-end creator at the center of things, you can afford to have more limited players surrounding them, but Philadelphia has a more dire need for creation out of their role players.

Expecting Tyrese Maxey to be a high-level player off of the bench in Year 1 is a lot to ask, even if I think it's a fair expectation for him long-term. Seth Curry is actually a better creator for himself and others than I think he is given credit for, but again, asking a lot of him to be the guy breaking down and collapsing championship-caliber defenses in the playoffs.

There are some vets available who should be cheap and give them options. D.J. Augustin lost his starting gig to Markelle Fultz last season and saw his shooting percentages dip, but he's rock solid as a backup and could hold down the fort as a starter if someone picks up a short-term knock. If we're looking at guys Doc Rivers took a liking to in recent years, Reggie Jackson shot the lights out during an abbreviated stretch in L.A. last year, though he has some major defensive warts.

There will almost always be cheap guards available who can help you out. Shabazz Napier and Langston Galloway are two more players who would help the bench a bit. In raw numbers, there are more productive guards available at any given time than productive people who are seven feet tall.

But if you want a high-level creator, you're probably going to have to go the trade route because the good ones are expensive in free agency. This could be a "wait-and-see" need they assess at the deadline — if Philly's new look has them looking closer to a real contender, I could see them pushing some chips in for a shot-creation boost.

The Sixers' offseason moves to date created a better situation for their big guns on offense but created a bit more work to do on defense. They've got reinforcements but could probably use a little bit more bulk to defend the big wings who dominate the game today.

One major reason why: Simmons should not be expected to constantly check the other team's best player. He will have a significant offensive burden no matter what role they draw up for him, and if you look at most of the perimeter offensive hubs around the league, they are not expected to constantly check the opponent's top option. In crunch time? Sure. But it's a task best split among multiple players.

The best merge of cost and fit could end up being Robinson III, whose chance to impact the team was unfortunately derailed by some health issues in the Orlando bubble. He was on track for a bigger payday with a strong early performance in Golden State, but the Sixers might be able to hang onto him using their taxpayer mid-level exception.

Again, the cost could be the main problem here. The small forward options are fairly plentiful, but the cheap ones are either defensive targets waiting to happen or iffy shooters who would make life worse on offense.

One of the better pure defense options, Denver's Torrey Craig, is a restricted free agent who I can't imagine they'd sit around and stall their plans for. Realistically, you could be looking at someone like Kent Bazemore, who is unspectacular but a solid depth piece. A high-end outcome would be Wesley Matthews, but he will have other contenders pursuing him and spurned Philly once in the past despite interest on the Sixers' side.

Grabbing another power forward doesn't feel like it will help this situation, either. Former Rivers player JaMychal Green has been a popular speculative name, but he just turned down a nearly $5 million player option and is likely looking for more money than the Sixers have to offer. Unless the Sixers intend to use him as a hybrid four/five, and Rivers did turn to him in small-ball looks at times last season, I'm not sure how much value they'd get out of him anyway. Green doesn't offer almost any ability to play a pure three these days.