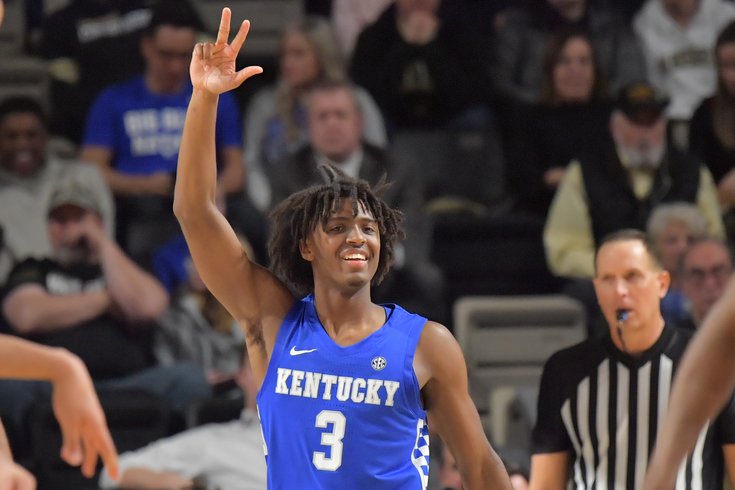 At 20 years old, there has been very little Tyrese Maxey has put his mind to and not succeeded at. As a high school player in the Dallas area, he made two all-state teams, a national All-American team, and won a gold medal with the U18 edition of Team USA. Off the court, he finished in the top five percent of his high-school class and was named All-Academic Honor Roll in the SEC as a freshman. Oh, and he knows Marvel movies well enough to be able to compare an entire roster of Kentucky teammates to superheroes, so long as you recognize he's Spiderman in the making.

His work creates winning, winning motivates the work. And during an initial sitdown with local media, Maxey's excitement for his new situation was hard to miss, as he explained what the last 24 hours of his life had been like after fulfilling a dream.

"It feels like a great, amazing situation for myself. I was talking to my parents about it, I feel like I can go in and make an immediate impact on a contending team, a competitive team, that’s the way I like to play. I like to win," Maxey said Thursday. "This is a team and an organization where it seems that’s what they want to do. They want to win now, and I think I fit right into that culture. I’m going to make those winning plays, I’m going to go out there and do what it takes to win. That’s what I think I bring to this team."

He comes from a program where that is what's demanded. One-and-dones at Kentucky are often just one of a number of guys on the roster regarded as top players in their class, big fish proving they can make it outside of the small pond. It creates what Maxey calls a brotherhood among John Callipari's current and former players. The new Sixers draftee has connected with NBA guards like Shai Gilgeous-Alexander, Jamal Murray, and John Wall, all big-money players who cut their teeth playing for the Wildcats.

It also necessitates sacrifice. Maxey spent much of the season in a secondary role next to Immanuel Quickley at Kentucky, even after coming out of the gates flying with a high-level performance against Michigan State in their season opener. But that experience is one Maxey feels has prepared him well for the next level, and for a situation where he won't be anything close to the lead dog in the short-term. He named an assortment of well-known guards — C.J. McCollum, Jrue Holiday, Jamal Murray — who thrive because they shift responsibilities as the moment and lineups necessitate.

"We go [to Kentucky] to come together and sacrifice and try to do something special, Coach Cal does a really good job of that," Maxey said. "Sometimes we have to take those sacrifices and not be able to show our full games because that’s what’s best for the team, and then we get to the next level and we’re able to show our full package."

Maxey would not be the first Kentucky player to break out following a productive, but perhaps not star-making season at Kentucky. From Devin Booker to Tyler Herro (and including some of the other players Maxey namedropped himself), there are numerous examples of UK players having more to offer than they could show under Callipari.

Past examples and platitudes aren't going to carry Maxey to NBA success, of course. That knowledge has fueled his offseason, which has had him rubbing elbows with Ben Simmons and LeBron James in L.A., working out with fellow Klutch clients to prepare for the league.

Maxey describes a daily grind that he has been at for most of this year, posted up on the west coast from May until this past Monday. The routine goes something like this: 6 a.m. workout, 8 a.m. lifting session, 10 a.m. workout, and maybe a third on-court workout later in the day if the energy and purpose are there.

It's not the only thing he did this offseason, but Maxey's shot has been a huge point of emphasis, especially now that he'll be alongside Joel Embiid and Ben Simmons. He made no excuses for home/road splits that showed him shooting much better outside of Rupp Arena, pointing out the rim is always 10 feet in the air and the ball is always the same width. And he's cognizant of the fact that it will take shots of all sorts to be a successful NBA guard.

"Catch-and-shoot, off of different actions, off-the-dribble, you have to have all of that in today’s game," Maxey said Thursday. "I feel like if you can’t be able to knock down shots from everywhere on the court, wide-open threes, especially now playing with a guy like Ben Simmons and Joel Embiid who cause a lot of attention, it’s going to be hard to be on the floor. That’s a main focus on someone like me in today’s game."

The crown jewel of Maxey's offensive game right now is his finishing around the basket. He's not an especially tall player at six-foot-three, but he's physical and was one of college basketball's best manipulators of big men around the rim. Using excellent body control, footwork, and pace-changing around the paint, Maxey slithers through traffic and scores at the rim with relative ease.

Skills that are connected to athleticism are easy to label as natural abilities rather than the product of work. Maxey says it has taken a combination of both, and an understanding of who he is to prepare for his basketball future.

"I realized I was going to be about six-foot-three, six-foot-four, around that range my senior year of high school, so I figured out ways to not always get all the way to the rim, but still get to the rim using floater packages, different finishing packages, being creative," Maxey said. "It’s instinctive but I have to work on it, I work on it every single day."

Add it all up, and consider that Maxey's defensive fire and instincts at the point-of-attack could be hugely impactful for Philadelphia, and you have a kid who seems like he will fit this city beautifully. Maxey was fired up about just about everything on Thursday, even discussing something as mundane as changes to his diet to best prepare himself for the grind of an NBA season.

In a year dominated by uncertainty, Maxey only found out within the past few weeks when his next season would be starting, his new home, his new system, and new teammates still very much in doubt. But he's coming to Philly in large part because of the belief the Sixers have in how he carries himself day-to-day, certain future or not, certain jumper or not.

"This is a guy who constantly improves his game, improves his game every year, and is a big team guy," Sixers President of Basketball Operations Daryl Morey added Wednesday night. "And those things are important. If you have top-level talent like him, plus you love basketball and you are willing to work and continue to improve, that's where you end up having a top player."