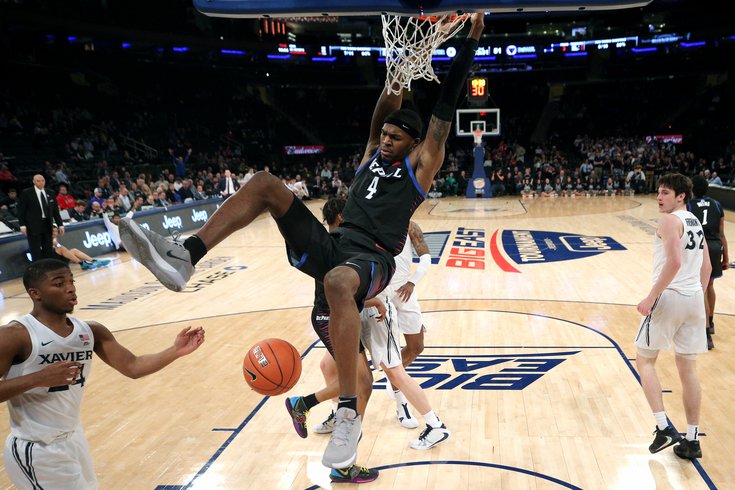 The easiest way to sum up Reed is that this is a lottery ticket pick betting on excellent athleticism and promising underlying numbers for a kid who played in a bad situation at DePaul. A couple of factoids from the draft guide of the excellent Sam Vecenie of The Athletic — Depaul was six points better than their opponent whenever Reed was on the floor, and an absolutely preposterous 21 points worse than their opponent when he was off of it.

That said, Reed was not exactly lauded as a terrific decision-maker, turning the ball over at an alarming rate while gambling a lot at the defensive end, which goes part of the way toward explaining his eye-popping defensive metrics.

Not bad for a flier who they might be able to groom in the G-League, but certainly not someone who should be expected to impact NBA games this season.

UPDATE (11:47 p.m.) — With the 49th overall pick in the 2020 NBA Draft, the Sixers fulfilled their reported pre-draft promise to Arkansas guard Isaiah Joe.

Source: Isaiah Joe to Philly at 49

You can read more about the second-round pick, including an analysis of his game, and check out some highlights here.

UPDATE (11:08 p.m.) — It appears Daryl Morey has pulled off his second big trade of the day as the Sixers are reportedly going to trade Josh Richardson to the Mavericks, according to Shams Charania of The Athletic.

Per ESPN's Adrian Wojnarowski, Richardson and the 36th pick (Tyler Bey) will be sent to the Mavs, while the Sixers will get Seth Curry in return.

You can read more about the Richardson-Curry trade right here.

You can read all about the newest Sixers player in our full write-up here.

UPDATE (7:10 p.m.): With rumors swirling about the potential for a Zach LaVine deal early in the day, there has been much speculation about what a trade for the Bulls' perimeter-oriented scorer would take. A splash of cold water — a source tells PhillyVoice it's not a deal the Sixers or the Bulls are currently discussing, despite some rumblings and reports to the contrary.

Everything about this year's draft is goofy, an early summer staple that has turned into a Wednesday evening event in the middle of November. We're not going to see many like the 2020 NBA Draft in our lifetimes. And after months of waiting, the big day is finally here, with plenty of uncertainty surrounding how the Sixers will go about tonight.

And that's where we step in. I am but one man who is only capable of writing so many articles in a single night, but our live tracker will keep you up to date on everything that has happened so far, everything that's still in the works, and what the Sixers still have left in the clip as the draft nears its conclusion. In-depth analysis will be provided elsewhere on the top picks and moves of the night, but if you find it hard to keep track of a million Twitter notifications, tonight's the night to just sit here and click refresh.

Keep an eye on this space for more reported moves as they come in.

What the Sixers currently have

No. 36 (via NYK) SURRENDERED VIA TRADE TO DAL

The first big domino of the day has fallen — Al Horford is on his way to the Oklahoma City Thunder along with the rights to Vasilije Micic and a pair of draft picks, a source confirmed to PhillyVoice on Wednesday night. In return, the Sixers are acquiring veteran shooting guard Danny Green and 22-year-old Terrance Ferguson.

The outgoing picks in the deal: a 2025 first-round pick (protected 1-6) and the No. 34 selection in Wednesday night's draft. It's a decent haul to give up just to get off of the contract of Horford, but it should almost immediately make Philadelphia better and Joel Embiid happier.

Full analysis of the trade can be found in our standalone article breaking down the deal.

Our own Matt Mullin has been keeping track of some of the small rumors throughout the afternoon. The most prominent buzz right now concerns Zach LaVine and Bradley Beal, who Vincent Goodwill of Yahoo! Sports says the Sixers are in on.

There is definitely some LaVine smoke out there today, and there's a Sixers connection to boot — former front office member Marc Eversley is now one of the top dogs in Chicago, so a relationship between the two franchises already exists. What's unclear currently is what exactly the Bulls would be looking for in a deal. Rumors have swirled that they want a veteran point guard, but the Sixers don't have one to offer.

Beal feels like a pipe dream by comparison. The Wizards have been adamant about not trading their top-notch guard, and with Jrue Holiday fetching three first-round picks and two pick-swaps from Milwaukee earlier this week, all indications are that it's a seller's market. Short of giving up Ben Simmons or Joel Embiid, a Beal deal feels out of reach, and those are guys I would certainly not swap for Beal.

One other development so far today — Arkansas head coach Eric Musselman posted an eyebrow-raising series of pictures on Wednesday morning, featuring the coach leading his team while wearing a bunch of Sixers gear.

Doc Rivers motivational and pre game speeches are incredible. Always love watching him build a championship culture. @BenSimmons25 is the epitome of position-less basketball in the @NBA today. Thanks for the mask and gear @sixers! #MaskUp pic.twitter.com/CkkmcHOKP9

Why does this matter? As we discussed Tuesday, Arkansas sharpshooter Isaiah Joe has been rumored to have a promise from Philadelphia, and his college head coach is not doing a whole heck of a lot to dispel that notion. We'll see if it ends up costing the Sixers extra to get a guy they like on draft night, but a stronger poker face doesn't seem like much to ask.

You can follow along as all the action unfolds throughout the 2020 NBA Draft right here in our live tracker: