NBA Draft rumors: Sixers speculated to have made a promise to Arkansas' Isaiah Joe 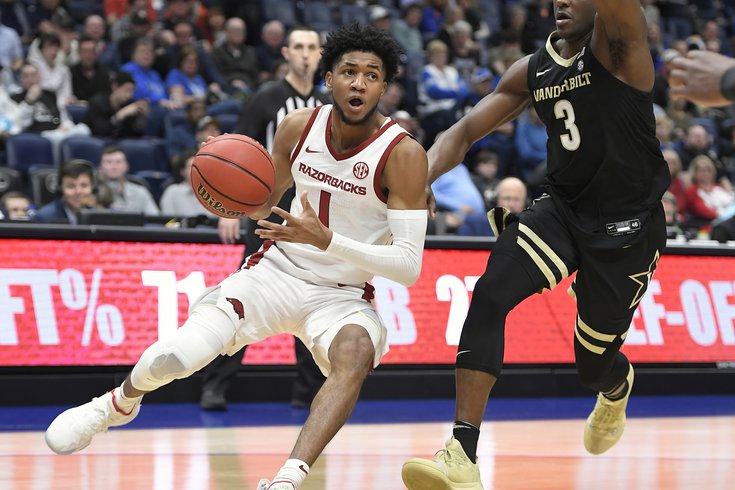 Have the Sixers made another draft day promise?

A day away from the NBA Draft, and one Sixers-related rumor has more traction than all of the rest. No, not a potential trade for James Harden, but the potential selection of Arkansas guard Isaiah Joe, and a promise they may or may not have made.

The latest news comes from Jonathan Wasserman of Bleacher Report, who covers the draft day in and day out. On Tuesday afternoon, he tweeted out that the current speculation in the rumor mill involves a promise to the Arkansas sharpshooter on Philly's end.

Draft rumor making the rounds: Speculation that Isaiah Joe has a promise from the 76ers, either at 21 or 34.

On its own, a fairly innocuous rumor. Teams leak targeted rumors all of the time to misdirect teams in the days, weeks, and months leading into the draft, hoping to pull a fast one on their competitors. But we have reason to believe this might be legitimate because of other hints throughout the process.

Early this week, Keith Pompey of the Philadelphia Inquirer name-dropped Joe as a guy the Sixers valued a lot before Daryl Morey was hired as President of Basketball Operations:

But what about Isaiah Joe? The former Arkansas shooting guard is one of the sleepers of the draft. According to sources, he was high on the Sixers' radar before Daryl Morey was hired as the president of basketball operations two weeks ago.

One source said the expectation was that the Sixers intended to select the sharpshooter in the draft. While picking him at 21 might be considered a reach, the belief is it would happen early in the second round. [Inquirer]

If you'll recall, Sam Vecenie of The Athletic hinted at a promise from Philadelphia earlier in the draft process. During a mock draft he put out in mid-October, Vecenie responded to a commenter who asked the draft expert about said scenario:

I've also definitely heard a name connected with the Sixers as a promise, but I don't have it locked down to the point to where I'm comfortable reporting it. I'm also not convinced that it's for No. 21. A bit too much up in the air on that for me to feel comfortable specifying a name. [The Athletic]

Tying all the evidence together and considering how last year's draft process unfolded when their affection for Matisse Thybulle was a pretty open secret, we have enough to say there's at least reason for suspicion. It's not good if the Sixers continue to openly telegraph what they want to do on draft night ahead of time, but that's for them to sort out, not those of us watching from the outside looking in.

Joe has considerable upside as a shooter — his percentages underwhelmed this past season, but he shot 41.4 percent from deep on eight attempts per game during his freshman year, and his free-throw numbers and mechanics suggest it'll translate well to the league. His shot is fairly effortless, with Joe taking and making shots from deep three-point range in college without blinking.

The volume he put up in the SEC is pretty staggering even for a sport that changed rapidly to account for the value of the three-point line. 9.1 attempts per game across two seasons is impressive on pure volume alone, and Joe has a couple of other traits that should help him establish a role at the next level. He reads the game well defensively to create steals without freelancing too often, and while he's not an advanced playmaker, Joe is a decent one-read passer who can at least keep the ball moving.

The rub? Joe is rail-thin and doesn't have the core strength to make up for that. It leaves him with a lot of questions to answer on defense even though he possesses good instincts. He's also not much of a shot or space creator, which is likely to make him wholly reliant on others to get his looks.

As a second-round target, that's something you can probably live with, but at No. 21, you would hope to get someone who brings at least a little creation equity to the table. Desmond Bane, for example, is far better equipped to create for himself and others than Joe.

We'll see if there ends up being real traction to this one soon enough.