Mock draft roundup: Sixers looking to land a guard at No. 21, but which one?

Malachi Flynn, Tyrell Terry and Cole Anthony are among the players being mocked to Philly in the first round 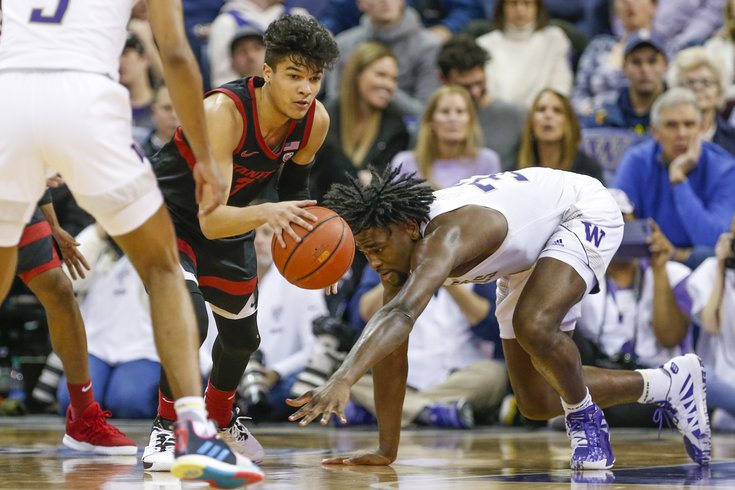 The 2020 NBA Draft is expected to be a stinker, but that won't stop anyone from thinking their favorite team could be one of a lucky few to pluck a contributor from this class. Days away from the 2020 draft, the Sixers still sit at No. 21 in the first round. Barring a trade in the coming days, and with a ton of volatility in draft stock, it's anyone's guess who they might end up with.

Daryl Morey's hiring shook things up in Philadelphia, so even at this late stage of the pre-draft process, there's a lot of guesswork being done to get a handle on what the Sixers could do on Wednesday night. They're not the wild card Philadelphia was when Sam Hinkie took over in 2013 without a track record of his own to point to, but the Sixers will certainly be actively working the phones to see if they can cook up something big.

Failing that, here's who the experts think they'll take if Philly stays put at No. 21.

Flynn has moved up draft boards rapidly as NBA teams have gotten more exposure to him in the workout hotspot of Las Vegas, where he has spent the pre-draft process. That has helped validate the outstanding season he had as one of the best players in college basketball, as well as his fit in today's NBA as a prolific pick-and-roll player with deep shooting range, strong decision-making and competitiveness defensively.  [ESPN]

Our thoughts: Flynn is one of the best pick-and-roll players this class has to offer, and he does his damage as both a passer and a scorer. He separates himself from other guards in the class by way of feel in both of those areas, with Flynn seamlessly toggling between setup and attack modes depending on what the defense has given him. With Doc Rivers taking over the team, the Sixers are expected to run a ton more pick-and-roll next season, and Flynn could quickly step into a backup playmaker role who helps tie together the bench.

On the other hand, he has difficulty getting to the rim and will be undersized at the next level. The latter could hamper Flynn at the next level, and though he's a smart, competitive defensive player, it's unknown whether that will matter when he's guarding players much quicker or bigger than he is.

Generally speaking, I'm a little wary of anyone who is moving up boards because of pre-draft workouts in Las Vegas, but Flynn was super productive in college so he doesn't fit the bill of the usual late-process riser. Worth keeping an eye on.

Elsewhere in the draft, Givony has the Sixers scooping Arkansas' Isaiah Joe and Duke's Tre Jones with the 34th and 36th selections.

UPDATE (11/16): When this story was initially filed overnight, Flynn was indeed the listed pick for the Sixers. A new name is in the slot as of late Monday morning: North Carolina's Cole Anthony.

We'll discuss Anthony more below, and it doesn't hurt you to be prepared for a Flynn selection anyway — Givony has him going one pick later to the Nuggets at 22.

The Sixers are no longer committed to playing Ben Simmons at point guard. That makes Theo Maledon a sensible option because he's a skilled primary ball-handler with plenty of room to grow.  [CBS]

Our thoughts: Parish has pretty consistently mocked Maledon to the Sixers this offseason, but I want to focus on the rationale here. Rivers has played up his desire to play positionless basketball with this group, and we don't know if Simmons' positional switch last season was a true shift or just a desperation move during a rough season. Though I think his future shouldn't be wrapped up in guard duties and have written as much extensively in the past, Simmons will likely handle a lot of the lead playmaking duties.

Rivers did grow young Rajon Rondo into the playmaker role in Boston, but generally, he wants to put the ball in the hands of an established vet to set up the offense. Talking to people who have a better feel for Maledon's game than I do, he feels like a bad compromise for guard options in this draft — his athleticism (or lack thereof) caps his ceiling, and though he's got upside as a pull-up shooter, other guys have shown more who will be available in that range.

Later on in his mock, Parrish has Tyrell Terry falling all the way to Philly at No. 34 in spite of noise about his rise up draft boards this fall. That highlights one of the interesting things about this class: with so few standout players, volatility could be the theme of the night. Player ranges, at least based on the intel the experts are collecting, is a bit all over the place.

Another Maledon selection! I'm cherry-picking a couple of strengths and weaknesses KOC has listed for his profile, bold emphasis being mine:

Strengths: Plays with a controlled pace in the pick-and-roll. He loves to use hesitations to compensate for his lack of athleticism. He’s a dual threat, dangerous as both a passer and shooter off the dribble. Shoots well off the catch and off the dribble. He’s not dynamic, but has nice form and can score when called upon. Crafty finisher who is comfortable scoring off the wrong foot or with his off-hand. He has a nice touch on off-balance layups, finger rolls, and floaters.

Weaknesses: Struggles to create space despite his change of pace and use of in-out dribbles and crossovers. He gets enveloped by quality defenders who beat him to his spot, and currently lacks the ability to counterattack. Doesn’t put a lot of pressure on the rim as a ball handler, which may limit his value as a playmaker if he’s not creating angles for kickout 3s. The flashes are there, but he must master his handle.  [The Ringer]

Our thoughts: There are a lot of guards in this draft who seem to have trouble with creating separation. As Sixers fans have learned the hard way the last half-decade or so, that's a pretty fundamental part of a good team offense.

One of the issues with this class is that you're going to have to make trade-offs one way or another to add certain skills to the lineup. Want shooting? You can get it, but it might be from a guy who is 6'1" and probably can't defend anyone. Want someone who can attack the rim and serve as a decent playmaker? Okay, but you might have to live with someone who is an unknown as a shooter. This is the exercise we go through every year, but very few people like this class all that much, so it's even more pronounced this season.

But hey, this kid is learning from Tony Parker, the Spurs legend and fell Frenchman, so perhaps he'll work through his limitations and turn into a piece.

Receiving looks in the teens, Terry also has teams in the 20s hoping he falls. We've heard the Sixers are interested in Terry, who'd give them another ball-handler, as well as a shooter capable of firing from deep in transition and off screens.  [Bleacher Report]

Our thoughts: Terry made a blistering 41 percent of his three-pointers at Stanford and was as good as it gets as a spot-up player, finishing in the 99th percentile on catch-and-shoot attempts. Terry excelled while guarded (93rd percentile) and unguarded (97th percentile) beyond the arc, per Synergy Sports, a good sign that his success was not just the result of shot quality. When you consider three-point attempts made up over 45 percent of Terry's total shot attempts and Terry's excellent free-throw numbers, it suggests his shot should translate to the next level with ease.

But getting to the basket and scoring inside the arc could be a big problem for Terry at the next level. His frame combined with a questionable handle — it's not bad, but it's a bit loose — will make it tough for him to get to the rim with any regularity. Finishing over length would be a potential concern on a normal team, and with the Sixers set up in a way where big bodies will always be walling off the paint against Philly, he may find it even more difficult to score over bigs on this team than he would elsewhere.

The 76ers desperately need another playmaker and offensive threat behind Ben Simmons, and Anthony is exactly that. There are other upperclassmen options available here (like Malachi Flynn), but with an already talented roster, I could see the new tag-team of Elton Brand and Daryl Morey taking a roll of the dice on a player who was once considered a potential No. 1 pick before his college season.

Profile: Anthony was a top prospect coming out of high school but never quite put things together in his one and only year at UNC before an meniscus injury ended his season. He has all the tools to be a scorer off the bench for an NBA team, but his shot selection needs improvement.  [NBA.com]

Our thoughts: Despite having all the attention of the opponent on a night-to-night basis in college, Anthony still graded out well as an off-the-dribble shooter last season, and his numbers in isolation were among the best in the country. If teams go under screens or drop too hard against him in pick-and-rolls, he will make them pay. While Anthony didn't have many opportunities to showcase it last season, he has potential as an off-ball shooter, finishing in the 86th percentile on catch-and-shoot jumpers last season.

He didn't fall from grace for no reason, however. Anthony struggled to get to the rim, shot poorly from the field, and was the victim of his own poor shot selection throughout the year. Fans have pointed out how terrible the situation in Carolina was for his set of weaknesses, but the Sixers don't offer the cleanest fit for Anthony, as they already have spacing concerns to figure out.

Irving's logic isn't off-base though — if the Sixers keep 21 and don't use it as part of a trade package, an upside swing makes sense for a team currently in no man's land, not good enough to contend and far too good to tank. If Anthony is better than his year at Carolina showed, the Sixers could get a guy who far outperforms his draft slot.