Sixers prospect profile: Has Tyrell Terry's offseason moved him too far up the board? 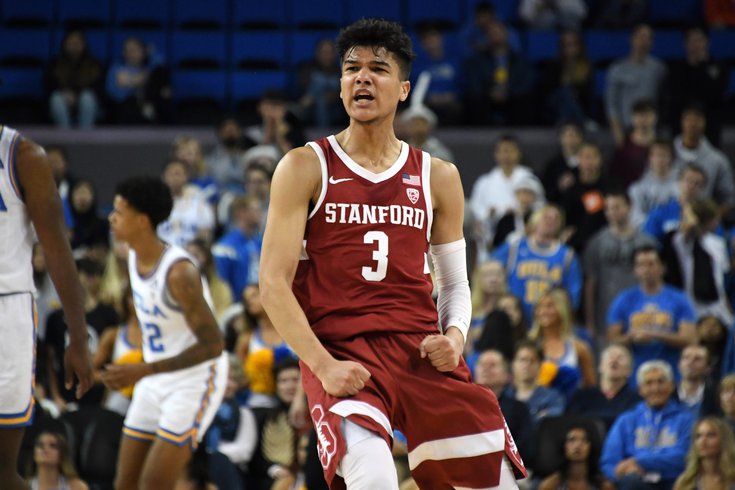 Tyrell Terry could be the shooter the Sixers desperately need — if he's still there at 21.

Coming off of a disappointing 2020 season, the Sixers have managed to inspire hope for the future with an offseason of excellent hires on the managerial side of things. Their first chance to deliver on that promise comes on NBA Draft night next week, when the new Sixers brain trust will try to identify the prospect(s) who can help take them to the next level.

A month or two ago, the guy to do that may have been Tyrell Terry, who was expected to be a candidate in the late first or early second round. But the Stanford product appears to have climbed the ranks in a class no one really likes, potentially moving out of Philadelphia's range at No. 21.

Still, the Stanford sharpshooter is a good candidate to kick off our prospect series pre-draft, as he still makes a ton of sense for Philly. Does he warrant a trade-up, or is he 'The Guy' should he fall to No. 21? That's what we aim to find out today.

*Terry was listed at 6'1, 160 pounds for Stanford last season, so these new reported measurements are a notable leap from his freshman season.

An entire article about Terry's shooting would be enough to make most Sixers fans salivate. He was one of the best shooters in the country during his lone season at Stanford, and on a team as desperate for shooters as Philadelphia, he would fit right in.

Terry shot a blistering 41 percent of his three-pointers at Stanford and was as good as it gets as a spot-up player, finishing in the 99th percentile on catch-and-shoot attempts. Terry excelled while guarded (93rd percentile) and unguarded (97th percentile) beyond the arc, per Synergy Sports, a good sign that his success was not just the result of shot quality. When you consider three-point attempts made up over 45 percent of Terry's total shot attempts and Terry's excellent free-throw numbers, it suggests his shot should translate to the next level with ease.

His arrival at those numbers should encourage Sixers fans. Terry showed off versatile shooting ability last season, showcasing an ability to make shots as a standstill shooter, an off-the-dribble threat, and off-movement after being run through screens. His money will be made as an off-screen player in the immediate future, but there are flashes of a future pull-up scorer there, albeit in a somewhat inconsistent fashion.

The thing that gives you hope for Terry is that he plays with a great understanding of what his strengths are and how defenses will react to them. His footwork is stellar, and that allows him to easily toggle between a catch-and-shoot three or a closeout attack if that's what he's reading from the defense. With time and effort, he'll turn more of his in-between attempts into buckets, and his high-level touch from deep suggests it shouldn't take long.

Terry will not have played with a low-post behemoth like Joel Embiid, or a 6-foot-10 hybrid like Ben Simmons, but it's not hard to theorize a role for him in Philly, with Terry more than up for the task of being the release valve for a post-up, or the guy spotting up on a Simmons push-and-kick in transition. He is the sort of shooter most teams are looking for in 2020, and the sort of player Doc Rivers has extracted a lot of value out throughout multiple stops as a head coach.

Elsewhere on offense, Terry is more of a jack-of-all-trades, master of none. He's a capable playmaker in the pick-and-roll, in part because Terry is a threat to pull and shoot from anywhere on the floor, keeping defenders uneasy as he turns the corner. He still has a ways to go to be anything close to a lead guard — while Terry has proven capable of making skip passes and nice pocket feeds to rollers, he'll end up missing some pretty easy reads to open shooters. Whether that's an IQ thing or a product of his lack of size is hard to say.

But there's enough there to feel good about Terry's upside, especially when you can dampen concerns about him as a lead guard by throwing him into the Sixers' ecosystem.

What to be concerned about

The biggest question, and one that has been "addressed" in some way during the pre-draft period, is whether Terry is big enough to cut it at the next level. In some ways, bulking a kid up should be the easiest thing to fix for an NBA team, but most of his issues are either a direct product of a lack of size or amplified by that problem.

Getting to the basket and scoring inside the arc could be a big problem for Terry at the next level. His frame combined with a questionable handle — it's not bad, but it's a bit loose — will make it tough for him to get to the rim with any regularity. Finishing over length would be a potential concern on a normal team, and with the Sixers set up in a way where big bodies will always be walling off the paint against Philly, he may find it even more difficult to score over bigs on this team than he would elsewhere.

As a thinker, Terry probably grades out as a defender you'd hope to get to net-neutral. His off-screen abilities on offense actually translate on defense somewhat, with Terry showing he can read where he needs to go to track guys through traffic. Unfortunately, he's frequently a candidate to get wiped out by contact, particularly in pick-and-rolls where the size discrepancies are greatest. That issue is also apparent when he's asked to check bigger guards, who can get past him without a ton of effort. Even with the bulk he added so far this offseason, I'm not sure this gets better to the point that he changes his defensive trajectory, and his gains will mostly have to be on the mental side.

Perhaps Embiid's presence mutes that concern, but it's a concern nonetheless. The presence of multiple high-level defenders has not been enough to prevent the Sixers from being torched by switch-hunters in the playoffs in recent years.

He's somewhat undisciplined in different areas, still in the process of trying to learn when and when not to send help or gamble, for example. Those are traits you're willing to live with in young players, but they're also a sort of trait coaches tend to punish harshly in young guys. How much rope would Terry have to sort through those issues here compared to, say, a random lottery team?

Further down the list, some of his strengths would be muted on this Sixers team. Terry's best playmaking at Stanford, for example, often came in transition. On a team led by Simmons (and to a lesser extent Tobias Harris), Terry is not going to get many opportunities to push the ball himself, though one could argue his ability to make hit-ahead passes on the break could free Simmons to get a head start on rim runs in open court.

Terry has been mocked to Philadelphia a fair amount over the past few months, including as a potential second-round target when the draft order was initially finalized. His improved measurables, however, appear to have changed the conversation surrounding Terry. Kevin O'Connor of The Ringer suggested on Monday that Terry could find his way into the lottery, a meteoric rise for the Minnesota native.

It's not surprising if you think about where the league has gone. Players with Terry's ability to shoot distort how teams defend their basket, and Terry has shown at a young age that he's got what it takes to read and react to the pressure he'll see at the next level. Next to an oversized playmaker in Simmons, you don't have to worry as much about Terry's limitations as a primary initiator. Ditto for a post-up centric offense with Embiid at the helm — Terry is overqualified to make entry passes, though he's not the pick-and-roll handler who is going to consistently create easier shots for Embiid.

I'm less sure about the defensive component. His fundamentals are not bad and his off-ball attentiveness is solid, but the weaknesses stemming from his, well, weakness, might be more pronounced at the next level. Assistant coach and defensive whiz Dan Burke is known for dropping his bigs in pick-and-roll coverage, and with Terry liable to get caught on screens, it could end with opponents walking into a lot of open shots with minimal effort. And for a team built around defense, Terry offers little-to-no flexibility on that end, limiting how Philadelphia can juggle matchups to mess with opponents.

In a draft as maligned as this one, though, I can totally see why a guy like Terry could rise much further than initially anticipated. The longer offseason period was a boon for guys who needed to get right physically to play in the league, and the high-end outcome for Terry is a court-tilting shooter who can playmaker for others, play with or without the ball, and improve your offense in halfcourt and transition. There are not many guys you can write that about in any draft class. Even if you're pessimistic about his chances to make the leap to that level, Terry figures to be an off-ball weapon teams can't leave alone.

If he's there at No. 21, he deserves strong consideration from the new Sixers brain trust. But that first bit appears to be the big question right now.