Sixers prospect profile: Cassius Winston can shoot the heck out of the ball 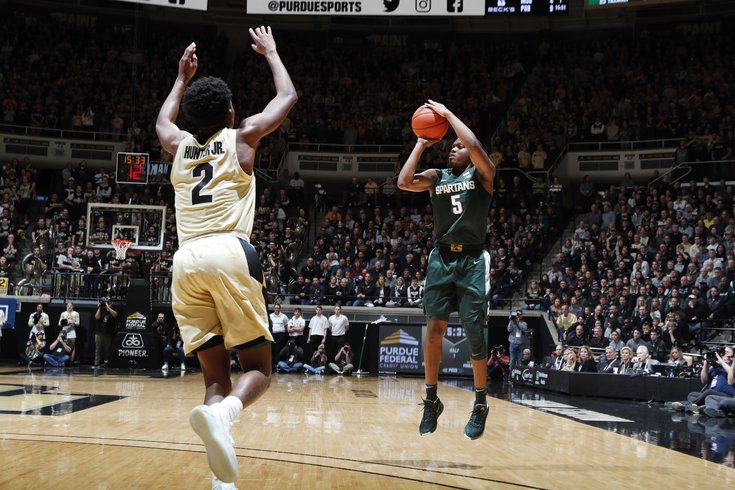 Michigan State's Cassius Winston is not as well-regarded as some of the players we've covered so far, but few players in the draft can boast the combination of production and success he did in college. A four-year senior who played for one of the most respected coaches in all of college basketball, Winston brings a signature skill that just so happens to be exactly what the Sixers need.

The question: Is he big enough to stay on the floor enough and make use of it?

Cassius Winston is an outrageously good shooter with great indicators all across the board. It is the reason he has a chance to make it in the NBA at all, and it's the reason he might be undervalued for where he'll probably go in the draft.

Most NBA guard prospects are either shotmakers or pure shooters, players who hunt their own shots off-the-dribble or guys who knock down shots coming off of screens or stationary looks. Winston is a rare combination of both. He can make every shot imaginable — pull-up threes, runners, leaners, stepbacks, and movement threes going in either direction off of a screen, connecting on each at a high clip. Only 56 percent of his made threes were assisted during his senior year, a testament to how good he was as an off-the-dribble shooter.

Winston is an undersized player, which heightens the importance of creating separation for most guys who live and die with their jumper. He's good at that, but it's almost a moot point because of how good he is shooting off-balance. These sort of shots are routine for Winston, and they have no right to be:

The strongest case I can make for Winston as a Sixers draftee (or to any other team, for that matter) is that he is one of few guys in the class with a claim to potentially elite skill. His shooting/touch is that good and could absolutely compromise opposing defenses at the next level if he's able to maintain it. The consistency with which he did so across four consecutive seasons leads me to believe he might just do so. At the very least, he's going to punish drop coverage at the next level, and his footwork and percentages suggest he'll be good off-ball as well.

That shooting ability opens the world up for Winston on offense. With most opponents focused on his pull-up shooting ability, Winston tends to have larger passing windows to work with and he's excellent at taking advantage, particularly out of the pick-and-roll. Aside from his senior season, Winston maintained a 2.0 or better AST/TO ratio at Michigan State and did so while boasting a 42.8 AST% across those four years.

(In more basic terms, Winston assisted 42.8 percent of his teammates makes while he was on the floor, and did so while more than doubling his turnovers in assists. That is not easy to do.)

There isn't a Sixers lineup Winston wouldn't work in on offense. He has the pick-and-roll chops to run bench units on offense, the catch-and-shoot ability to play a heavy off-ball role, and the IQ to blend those two roles together into one productive package. So what's the catch?

Stop me if you've heard this before — Winston's size is going to be an issue at the next level. Standing at just 6'1" (6'2" if you want to be generous), everything he lacks will be under a brighter light at the next level. Is pure touch and footwork enough to make up for that? Time will tell. I know this has been a running theme this week, but it's hard to be good in a game of giants as a smaller player.

One reason I'm skeptical about the small-ish guards in this class that we've studied is that none of them have an outlier physical trait to make up for it. Winston's wingspan is actually relatively decent for his size, but a lot of second-unit guards who find success at the next level have some sort of elite athletic gift, most often speed. Winston doesn't have much, and if his (admittedly decent) handle isn't enough to make up for that in the NBA, he could end up in a lot of trouble.

That applies to his shooting, too. It's one thing to create separation to shoot as a small guard against college players, and another matter entirely to do it against pro athletes. He'll be one of, if not the smallest guy on the floor at all times, which changes exactly how much space he needs to get a good look off.

There are certain qualities that should carry some and help him out with that transition. Winston has gotten plenty of reps as an off-ball player despite his huge playmaking role under Tom Izzo, and he reads traffic well to find the soft spot and get an open look. Still, he's not particularly strong, and that might stop him from getting free during his early days in the league.

All of these are secondary concerns to the defensive end, where Winston has already had issues to this point in his career. Opposing players are often able to drive right through him or score over him, taking advantage of his size without having to work too hard. Screeners can dislodge him fairly easily, leading to him getting wiped out in pick-and-roll coverage.

Winston is a guy you might have to actively hide on defense, which is never a position you want to be in. There are a lot of lineup/backcourt combinations that are basically completely untenable for Philly — pairings like Winston/Milton or Winston/Korkmaz are asking for other teams to punk them, and adding a lot of work to the plate of whoever is expected to anchor the back end. There's a chance he takes enough off the table defensively

At this stage of the game, Winston is being looked at as a fringe first-round guy at best. Sam Vecenie of The Athletic has him mocked to Philly at No. 34, Gary Parrish of CBS Sports has him at No. 28 to the Lakers, and Kevin O'Connor of The Ringer has him all the way down at No. 41. Not in the same range as the players we've discussed to this point in the series to be sure.

There is a non-zero chance that Winston's size/physical tools prevent him from staying on the court in an NBA game, but in a draft without many (if any) sure things, he strikes me as a guy who could outperform his likely draft position. There just aren't a lot of guys who enter the league with the resume he has as a shooter.

You could also sell yourself on him for Philly specifically because they are better built to hide him than a lot of other teams. Joel Embiid is elite as it gets protecting the rim, and between Ben Simmons, Matisse Thybulle, and (for now) Josh Richardson, the Sixers generally have at least 1-2 good perimeter defenders on the floor at a time. In theory, they could absorb some of the defensive hit you'd take by playing Winston, and Philadelphia's core would benefit greatly from playing alongside a guard with his shooting profile.

He's old, he's a little slow, and it might not matter if he continues to shoot as he does. We'll see which team is willing to bet on that.