Sixers prospect profile: Is Desmond Bane the two-way guard they need to round out the lineup? 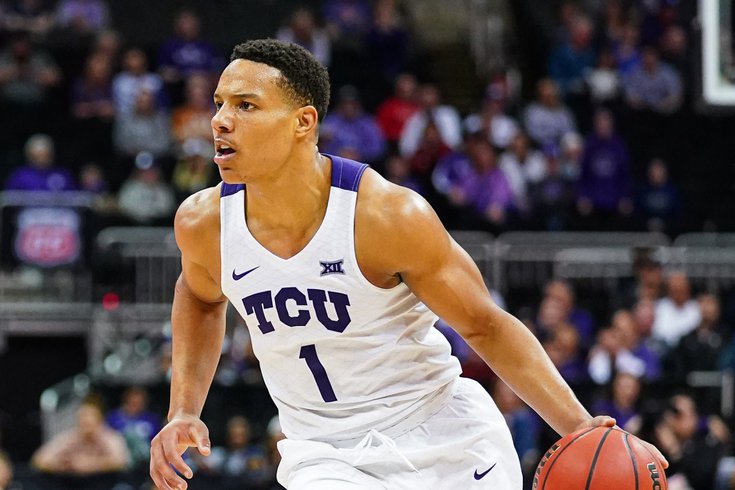 Desmond Bane checks off a lot of boxes for the Sixers at No. 21 overall.

Desmond Bane could very well be that guy. A four-year player at TCU who rose from a tiny Indiana high school to become one of the best shooters in the country, Bane is a riser with a sterling reputation and an excellent candidate for Philadelphia to consider at No. 21.

Should his tools be a concern, or will Bane's brains offset what he lacks in size and athleticism? Let's get into it.

He may very well have a claim to the title of the best shooter in his class. Bane is not an upperclassman who suddenly developed a shooting touch during a small sample, but a player who always possessed range that has grown in stature over the years. His final year at TCU was as good as it gets from deep, with Bane knocking down 44.2 percent of his looks on 6.5 three-point attempts per game.

When you hear "high motor" about a basketball player, it tends to be a reference to their defensive work rate. For Bane, the label also fits on offense. He's constantly relocating, looking for gaps in a defense he can cut or sink into, even if the end goal is not to get a shot for himself. Combine that with an ability to read a defender's body language and use his screeners effectively, and you have the prototypical off-ball player, the guy whose activity stops things from getting bogged down.

That's a desperately needed quality on this Sixers team, even before we get to the shooting success he has. How many Joel Embiid possessions in the post ended in total stagnation last season? How many Ben Simmons drives into traffic ended in risky passes to static perimeter players? Bane would help alleviate those issues, in addition to providing high-level shooting from the perimeter. The ball finds energy, and Bane has plenty of it to spare.

Where you fall on Bane ultimately hinges on how you feel about his upside as a creator. At the very least,  I think Bane will be a strong part of a ball-sharing offense, a guy who will make most of the easy reads and create open looks with subtle manipulations of the defense. Bane does sprinkle in the occasional advanced pass — a pass over the top to an open shooter in the corner, a pocket pass to a rolling big — but I think those will probably be the exception, not the rule.

Maybe his reads aren't advanced, but his physical delivery of the ball is very good. Bane will put the right amount of pace on a pass and throw it exactly where it needs to go, often in the shooter's pocket but occasionally off to the side, like a QB making a sideline throw where only his receiver can reach it.

An important note for a guy who could join a Doc Rivers team — Bane as above average in just about every part of a pick-and-roll offense. He plays under control, leverages his strength well, and makes up for whatever he lacks in tools with guile. Bane's ability to manipulate the defense with body language is apparent as both a driver and a perimeter passer. He's also a guy I think you can expect to play within the team construct, the classic "take what the defense gives you" guy.

Bane's best trait on the other end of the floor is an extension of how he handles offense — he just knows where to be and how to get there. He times help defense well, he was an effective and active communicator at TCU, and he is a sturdy guy, so he can get through screens better than most players.

There are not many plays where you're going to look at Bane and say, "Why was he there?" or "Why was he doing that?" He marries attention to detail with effort, and it leads to plays like these, where he appears bigger than he actually is.

The pass is a small consideration here, but it's a reflection of the praise above — it's right where it needs to be to get his guy an easy transition bucket.

There's a lot of projecting to be done if you want Bane to be more than a high-level role player. Athletically, he has burst and quickness issues, and while he has found ways to make up for that at lower levels, it is always a concern when you don't have edge-case skills to make up for it at the next level.

Bane doesn't have those. Whether he's unwilling or unable to turn the corner and get to the rim, he doesn't get there and finish at the cup enough for a 6-foot-6 off-ball guard/wing. There are a lot of things you can develop over time in the league, but a first step doesn't tend to be one of them, and Bane lacks the explosiveness to routinely get by defenders. His finishing is nothing special, and that's a potential concern against the rim protectors he'll see in the NBA.

One thing I noticed during the tape I watched was his propensity for stopping/picking up his dribble at inopportune moments, leading either to turnovers or chaos in the middle of an offensive possession. Given his overall basketball IQ, it's hard to get a feel for what the explanation for this habit is. I default to believing it's an extension of the ballhandling and explosiveness problems. Without the craft or confidence to dribble himself out of serious trouble, he comes to a halt earlier and more often than he should.

Who he guards at the next level is an interesting question for me. Smaller guards are going to be an issue because he lacks the quickness to track them, and though his strength/frame give him a good shot against bigger wings, he'll likely be giving up a couple of inches to a lot of guys he'll be asked to guard at the next level.

That's a playoff-level concern more than it is an 82-game concern. Bane is smart enough to be a productive team defender in most contexts and tough enough that I don't think he's ever liable to get picked on. If he's the third or fourth most important defender on your team, you are preparing to send opposing teams to the shadow realm.

However, he's the rare player with a negative wingspan, which can hurt him from time-to-time on closeouts and contests, even if his reads are sharp. The bigger the competition gets at the next level, the more room there is for something like that to be exploited.

Your satisfaction with Bane as a Sixers prospect will ultimately hinge on what you think the Sixers need to get to the next level. Even if you're bullish on his upside, he probably tops out as a secondary scorer or creator, someone who can help keep the offense afloat for stretches but not someone who can anchor it himself.

For most teams, they would take that outcome at No. 21 happily. The Sixers probably would too but have deeper needs than other teams with their talent. Simmons will never be a primary initiator without a change to his approach, and it's difficult to get there through Embiid in the post, talented as he may be. It's why the Jimmy Butler addition changed the situation so much two seasons ago, particularly when the playoffs rolled around.

Of course, none of that is a mark against Bane himself. He has the profile of the sort of guy that fits into any program and will get the most out of what he has. Bane is tireless and mentally sharp on both ends of the floor, showing care for his craft that bodes well for the future. His defensive question marks, in the eyes of this writer, are less concerning in the 2020 NBA than they would have been in the past. Smart defenders who close down angles and find themselves in the right position more often than not will always be useful.

The excitement level for Bane has shifted during the offseason, similar (but perhaps not as dramatic) to the rise of Tyrell Terry. Previously considered a second-round candidate, Bane has reportedly been rising up draft boards around the league. Sam Vecenie wrote about it in mid-October for The Athletic, and I want to highlight a brief section of that intel here (with the bold emphasis mine):

He should turn into a solid role-playing floor-spacer at the next level, and I have a late first-round grade on him. He’s been a riser throughout the pre-draft process...He’s gone into interviews and has been impressive with his understanding of how he’s going to operate at the next level. The name Joe Harris has come up a lot from front offices. [The Athletic]

Of note here: Bane went from being the biggest guy in the gym playing in 1A high school games in Indiana to a spot-up wing his first year at TCU, eventually becoming a credible pick-and-roll handler who can shoot off-the-dribble and create for others. Working hard is a pre-requisite for making it as a prospect, but working smart is how you find real success at the next level. His growth over his four years in college suggests Bane does both of those things, adding new components to his game in a deliberate and sustainable fashion.

Being a good and humble kid doesn't mean you're going to be a good basketball player. But an understanding of self has produced terrific on-court results for Bane, and I think he's the type of worker you bet on to breakthrough.