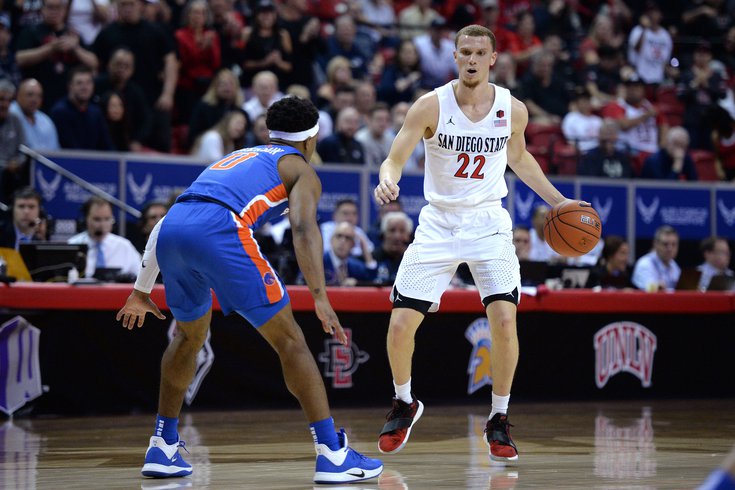 San Diego State Aztecs guard Malachi Flynn could be an option for the Sixers in the first round of the NBA Draft.

You know who didn't have a disappointing 2019-20 season? Malachi Flynn. After sitting out a year to transfer from Washington State, Flynn led San Diego State to perhaps their best-ever season, a 30-2 campaign that was cut short by the COVID-19 pandemic.

All that's left for him to find out is whether his pick-and-roll prowess will translate to the league in spite of some concerns about his size.

Flynn is one of the best pick-and-roll players this class has to offer, and unlike some of the other players we have studied so far, he does his damage as both a passer and a scorer. He separates himself from other guards in the class by way of feel in both of those areas, with Flynn seamlessly toggling between setup and attack modes depending on what the defense has given him.

Passing is the biggest separator between Flynn and a lot of his peers. Put him in a pick-and-roll, and odds are he will create a high-value look for your team somewhere on the floor, even if he's not the guy who gets the assist himself. Flynn is one of the few guards in this draft who seems to see things before they unfold on the floor, and the variety of passes he can make strengthens that point.

Out of the pick-and-roll, he can make pocket passes, lobbed entries to bigs, hit a shooter with a wrap pass, and is generally adept at using what the defense is showing against them. He's quite good at hiding his intent during any given possession, waiting until the last second to turn his head in the direction of the guy he's looking for. That was especially helpful for San Diego State's bigs last season:

Possessions with Flynn as the pick-and-roll handler generated 1.06 points per possession, according to Synergy, good enough to place him in the 96th percentile nationally. He's a very good off-the-dribble shooter, ranking in the 81st percentile on all off-the-dribble shots, though that number probably undersells his ability because of his poor showing from mid-range last season.

Even better news: Flynn is a good, or at least above-average ballhandler which should help him retain his off-the-dribble shooting ability at the next level. Despite being undersized, he has enough tricks in the bag to create separation and get clean looks off, and he makes up for what he lacks in top-end with changes in speed and direction.

As a second-unit guard, he's basically everything a Doc Rivers team would want on offense. Though he spent most of his time at SDSU on-ball, he profiles as a decent-to-good spot-up guy as well.

At the college level, Flynn was a very good defender in spite of his physical limitations. He straddles the line between aggressive and overzealous well, darting into passing lanes enough to keep defenses honest without being a gambler. It shouldn't be a surprise based on his passing expertise, but his vision is helpful on defense, with Flynn doing a good job tracking opponents and maintaining solid positioning most of the time.

From a Sixers-specific perspective, Flynn generally does a good job of fighting over screens, a trait that should endear him to assistant Dan Burke. He's a competitor on that end of the floor and will not fail as a result of his effort.

It all starts with Flynn's size. If he were a few inches taller with a larger wingspan, he would be a slam-dunk pick. But at 6'2" with a barely positive wingspan (and some places have him listed at 6'1"), Flynn is in the danger zone for size as he enters the league.

The first place you look as an area of concern is scoring at the rim, where Flynn was effective in college but not especially prolific. He ended up settling for runners a fair amount of the time in college, and you have to wonder how much of a problem that ends up being against bigger, more athletic competition.

When he's in pick-and-roll situations, he has a much better/easier time getting to the cup than he does when he has to create from a standstill. You could spin that a couple of different ways — Rivers probably won't ask him to do much outside of pick-and-roll creation, but it would hurt him on broken plays, late-clock situations, and a lot of other basic sets that aren't pick-and-rolls. He's not someone you can really use as a cutter, for example. If for whatever reason he has trouble generating shots for himself, he's going to have limited opportunities to impact the game.

Defensively, there are more reasons to be worried about the jump between levels for Flynn. He's a one-position defender no matter what you think of his chances at the next level, and Flynn's strength was an issue for him even at lower levels of competition.

As other initiators around the league get bigger and more athletic, Flynn's weaknesses defending drives could become a more glaring issue, resulting in an uptick in fouls or easy baskets for his man. Against switch-heavy teams, it's more than likely they'll try to target and isolate him if he plays in big moments, compromising team scheme in the process. Already, Flynn's length presents some problems when he's contesting jump shooters, something that will be an even bigger concern against larger players (and much better shooters) in the NBA.

If Flynn is able to add strength, I think he can be at least an average defender, likely much better than that. Since I'm not worried about his attentiveness or effort on that end of the floor, he's a guy I would trust to maintain the integrity of the scheme when he's away from the ball. When you sprinkle in some deflections and steals, suddenly you have another good piece to add to the mix.

But as an older prospect, it's harder to bank on a big leap in strength compared to some of the younger prospects in the mix at No. 21.

Flynn will almost certainly be available when the Sixers pick at No. 21 next week. Unlike some of the other players we have profiled, Flynn is consistently mocked further down the draft order. ESPN's updated mock has him going No. 24 to the Milwaukee Bucks, while Sam Vecenie of The Athletic most recently had him going to the Lakers at No. 28.

Here's where I ultimately land on Flynn — I think the concern about how his size will hold him back is legitimate, but you have to ignore a lot of positives to make that the No. 1 item on your scouting report. Tools, upside, and projection matters, but a lot of the time all it comes down to is whether someone is a good basketball player who gives a damn about their craft.

We can say with a reasonable amount of confidence that Flynn is both of those things just by watching the tape. He competes hard and buys in on defense, and his skill package says all it needs to about the care he has put into getting better. San Diego State was one of the best teams in the country during his lone season there, a fact they owe largely to Flynn's feel for the game and skill out of the pick-and-roll.

Flynn is not the sexiest pick or the guy with the most upside. But he's very good at what he does, and it happens to be one of the most important skill sets you can have in today's NBA.