NBA trade rumors: With Jrue Holiday on the block, should Sixers be in pursuit? 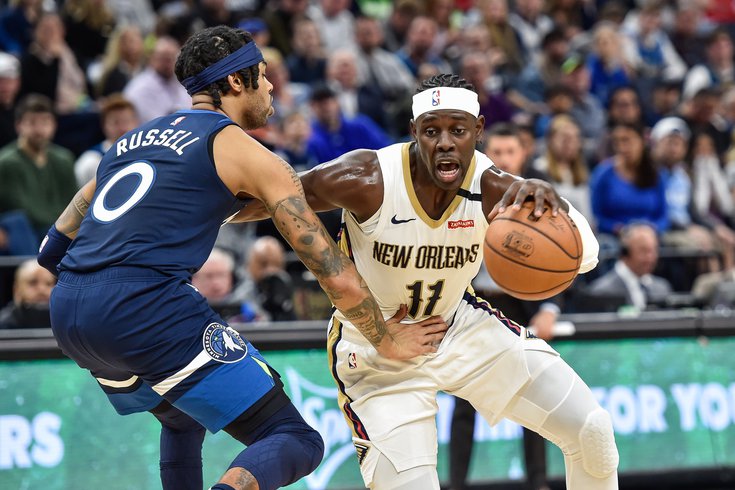 The Sixers need guards. A high-level guard is now on the trade block to be had. And though it might feel difficult to focus on it right now, that gives us a chance to have a conversation about whether they should trade for Jrue Holiday.

According to Shams Charania of The Athletic, the Pelicans are now open for talks on Holiday, the All-Defense caliber guard Philadelphia traded away to kickstart "The Process" way back in 2013.

It's not completely unexpected, with many reporters tossing around Holiday rumors over the past couple of months, but it suggests the Pelicans are getting more serious about moving on from Holiday and focusing more on a competitive timeline that hinges on Zion Williamson and Brandon Ingram.

If you haven't been keeping track of Jrue Holiday since he left Philly seven years ago, his All-Star year in 2012-13 remains an outlier but he has continued to play high-level basketball ever since. After battling through some injury-plagued seasons during the early years in New Orleans, Holiday established himself as the jack-of-all-trades guard the Pelicans hoped they were getting when they dealt for him, peaking with a 21.2-5.0-7.7 season in 2018-19, bolstered by his second consecutive appearance on an All-Defense team.

The first question you have to ask is how good a fit Holiday would be in Philly from an on-court perspective. A guard who can do a little bit of everything offensively and add to their defensive toughness feels like a perfect fit, though there are more concerns than you'd like.

The defensive end of the floor is where I would argue Philly gets the most value out of a Holiday addition — he is declining at this stage of his career, but a three-man group of Embiid-Simmons-Holiday is an absolute monster, with Simmons and Holiday giving you a two-headed monster to throw at perimeter matchups. Holiday could focus his energy on smaller guards and wings, rather than needing to take the LeBron-type assignments he often drew for the Pelicans, leaving Simmons to deal with the bruisers. Sprinkle in Matisse Thybulle, and suddenly you're looking at one of the most disruptive defenses in the league.

On the other hand, Holiday has never really turned the corner as a shooter, hovering in the low-to-mid 30s from deep for most of his career. His catch-and-shoot numbers are decent, but not spectacular, a concern for a guy who would spend a lot of time as the outlet for Joel Embiid and Ben Simmons on the perimeter.

Holiday has always hovered in the good, not great range as an offensive creator, and though he'd be an upgrade over what they have on hand, he's not a catch-all solution by any means. He's got the craft to get to the rim and finish, but how much more difficult does that get for him with teams loading up in the paint against Philly? That's hard to account for.

An undersold factor in Holiday's favor — there are very few if any better locker-room guys in the league than the former Sixers guard, who was named teammate of the year for 2019-20. Being a good guy doesn't mean you'll produce any more or less, as fans have witnessed with Tobias Harris the last year-and-a-half, but with Doc Rivers coming in and trying to bolster the culture, Holiday would be an asset, a guy who is willing to adapt based on what the team needs.

The biggest hurdle for Philadelphia is likely to be the market for Holiday. There will be no shortage of suitors for Holiday heading into next season, and the list of teams could include someone like the Nuggets, who have an attractive young piece in Michael Porter Jr. who could swing any deal if they decide to include him. And the Sixers don't have a lot of positive-value chips to deal — the trick of this offseason will be turning negative-value contracts into something better.

Tobias Harris, for example, feels like a complete non-starter for a team set at the forward spots. That leaves Al Horford, and the good news is Marc Stein reported last June that New Orleans had interest in Horford when he hit free agency. Maybe that remains true now, and maybe they think Horford is a much better fit next to Zion Williamson than Joel Embiid. The Sixers do have picks to work with, and if they were able to get some sort of certainty on a long-term commitment from Holiday, a deal gets tantalizing.

(A fun subplot: could the Sixers somehow get JJ Redick involved in a Holiday deal? Adding another former Sixers player in one trade would be pretty funny, but it would also make a ton of sense, adding shooting to a team that desperately needs it with this core. And he's a guy Embiid likes quite a bit to boot.)

A swap centered around Horford for Holiday, however, just seems to run counter to why the Pelicans would deal Holiday in the first place. They don't get younger, they probably don't get better, and they add a bit more long-term money to the books. Even if you include someone like Josh Richardson, that adds another expiring contract and more future uncertainty to the mix for New Orleans, and Richardson is a worse fit with the young core in New Orleans than Holiday is.

You can't rule out the possibility, and Holiday is a more viable option than, say, James Harden is for sure. But there are some factors working against them here, and I think Morey ultimately probably has to look elsewhere.