What will Sixers' new front office structure actually look like? 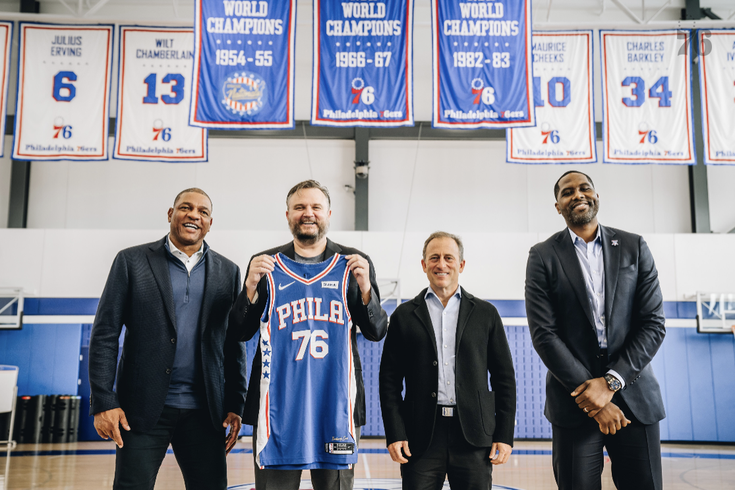 Throughout the offseason, NBA power brokers have weighed in with cautious optimism about the Sixers behind the scenes, praising Joshua Harris and Elton Brand specifically as men capable of turning the ship around. What seemed like empty, behind-the-scenes talk at the time has proved noteworthy, as Philadelphia managed to recruit arguably the two biggest management hires of the offseason.

But with Daryl Morey in charge, it's worth a quick revisit of what we expected to happen in the front office vs. where we're at. And it all starts with a quote from Brand in the early days of the offseason, putting a bullet through the idea of collaboration.

"To be clear, and frank, we feel the collaboration days didn't work too well," Brand said during his year-end presser. "So I will be leading the [coaching] search. I will be making the recommendation to Josh and David, of course, but we're getting better. And I've grown as a leader and I've grown as a general manager. I was put in the fire, had some tough decisions to be a part of, but now I'm looking forward to putting my stamp on this thing and taking full accountability for whatever happens next."

He got one thing very right: Brand has put his stamp on this thing. He was the man out front in the coaching search, personally contacting and meeting with candidates around the league, with ownership getting involved once the field began to narrow. In the days before Morey's hire was made official, team sources insisted Brand was important in the team's pursuit of Morey, allegedly pushing ownership to go after the former Houston exec. Joshua Harris went so far as to make note of that in his opening statement Monday.

I would quibble with that framing. Very few (if any) executive-level people in any business are actively pining for their employer to put a more powerful boss above them. But at the least, his multi-year extension proves Brand is on board with his position in the new setup, a point he made clear during Morey's introductory presser.

"I just feel that I'm going to be selfless. My goal is to win a championship and enjoy the journey along with that," Brand said Monday. "So whatever my role needs to be, I accept that role and look forward to growing this organization to get to a point to win. That's why I'm in this: to win. I'm going to follow Daryl's lead. He's the president. He's going to be the head of basketball operations. But, as general manager, I'm still going to have a significant role in vision and strategy and making sure we can be at the level this city deserves."

Okay, so that makes the setup sound quite simple. Morey is at the top, Brand is a trusted lieutenant, everything falls into place. In practice, that's how I expect it to work.

Morey, though, was careful to be vague about the structure when asked about it Monday, even deferring to Brand to answer the question first before he took a crack at it. Well-known as a collaborator, including with his star player in Houston, Morey stressed he was less concerned about the exact chain of command than he was having as many smart people and ideas as possible in the organization.

"You make great decisions by having great people who are all working towards the same goal and not worrying about what title someone is or honestly what role," Morey said. "The best ideas can come from anywhere, interns all the way up to — hopefully, Elton and I have a good idea every once in a while. So that collaborative style, and really all our job is to make great decisions so we’re going to use great people all working together and use data."

"Because I think if you have great people and you have data that gives you the ground truth of what you’re working towards, you’ll make great decisions in draft, trade and free agency. And that’s the currency of what Elton and I do. And then hopefully we get enough good players so Doc can take it from there and win a lot of games.”

"Ultimately someone has to make a final decision and that’ll be on me, that’ll be on Doc, that’ll be on this group that’s on the stage... Any sort of ‘My way or the highway’ doesn’t yield championships in my opinion." —Daryl Morey

That's a different tune from the one Brand was singing a couple of months ago. It also begs the question of what happens to the guys who were brought in before Morey was hired.

Peter Dinwiddie, a rising star from Indiana's front office who team sources claimed was coming to Philadelphia to be Brand's No. 2, suddenly finds himself back in the No. 3 position he was in while still with the Pacers. For their part, the Sixers have insisted their recent front office hires (Dinwiddie, Prosper Karangwa, Jameer Nelson) are unaffected by the Morey move, and there's still value in making the jump from a smaller market to Philadelphia.

And what of the conversation regarding final say? Again, Morey gave himself and the team outs here.

"If you come into an organization, even if you know a lot more like Elton, and you’re saying, ‘I know the way, I’ve got the answers,’ you’re not going to make the decisions," Morey said. "Ultimately someone has to make a final decision and that’ll be on me, that’ll be on Doc, that’ll be on this group that’s on the stage. But once you make that decision, everyone gets behind it and you’re collaborative before that. Any sort of ‘My way or the highway’ doesn’t yield championships in my opinion.”

If you're asking me, it seems like a whole lot of playing coy for no reason. You do not contact, lure, and hire Daryl Morey to be just one man in some zany executive committee, nor are you drawing him here in the first place if you give him anything less than full and final say. That doesn't diminish the contributions of the other important figures in the front office, including Doc Rivers, who will get the requisite say an experienced and successful coach requires. It's just an acknowledgment of who you have in place.

Morey has absolutely proven himself willing to collaborate over the years. He's not coming in here to neuter anyone or throw good ideas in the trash because they're not his own. But the buck stops with him, or at least with him and ownership. What's really left to figure out is who gets involved with scouting, who hits the road vs. who operates from the home base, who gets on trade calls, and so forth. The rest is mostly theatrics.

In any case, expect the org. chart to shake out soon enough — Brand said Monday the roles and responsibilities would be figured out sometime over the next few days, with long meetings expected to take place across the Philadelphia area. Maybe then, for the first time in a long time with this team, we'll have some real clarity.