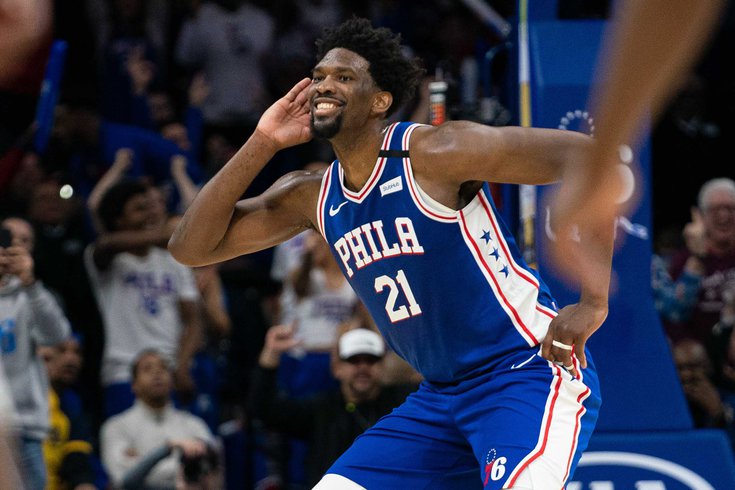 Daryl Morey's introductory Zoom call in Philadelphia had all the pomp and circumstance that a video conference call can possibly have. The four most prominent figures in the new-look front office — Morey, Elton Brand, Doc Rivers, and owner Joshua Harris — did their best to hide their intentions for the future while still showing excitement about what they have in place and what they might turn this program into.

One message stood out above all the rest. Regardless of what you might have seen Morey do at his last stop, Joel Embiid is the anchor in Philadelphia, the player he expects to lead the Sixers into a winning future.

"There aren’t many opportunities where you get a chance to win, and I really felt this was the right fit," Morey said about taking the new job in Philly. "Joel is a dominant, dominant big man. I’m excited to get back to that. I worked with Yao Ming and we got very close [to a title] in Houston with Yao Ming. I think we can go all the way with Joel."

It was the first in a series of strong endorsements for Embiid, which may seem like the obvious thing to do or not a big deal, but is an important tone to set as Philadelphia's new front office sets up shop.

It was not so long ago that Embiid, in the midst of leading the franchise back to relevancy, was being disparaged by Bryan Colangelo (or at least someone close to Bryan Colangelo) while he was running the franchise. Despite a superior relationship with GM Elton Brand, Embiid nonetheless watched as his favorite teammates and the players with whom he best fit moved on, replaced by another big man who complicated his life last season.

Embiid said himself in August that those moves took a toll on him, stole his joy and comfort in the game. That much was obvious watching him play most of last season. He meandered through stretches of games on both ends, sliding away from the transformative defense he has proven capable of playing. Then there are the lingering questions about how he fits with Ben Simmons, who will emerge as the on-court leader who can carry them to victory, and whether those can be answered as both prideful young men grow into their primes.

Philadelphia's new president of basketball ops, however, sees value in Embiid's hurt feelings. Perhaps that's because, as Morey claims, Embiid has been in the facility twice a day working out to get right and ready for next season, channeling those emotions in a positive way. Or perhaps it's because Morey has seen the domino effect of Embiid's unhappiness, and how that shook up the organization.

"I love it," Morey said Monday. "It shows he’s a competitive guy. He wants to win a championship. I’ve talked to him, Elton obviously knows him well, Doc has talked to him, he wants to win a championship. He’s a smart player who knows you only have so many opportunities. He pushed everyone to improve the organization, improve the roster, and frankly I’m excited to go on this journey with Joel and Ben moving forward."

A partnership between Morey and Embiid seems less intuitive than the bond between Morey and James Harden in Houston. The Rockets' star scorer allowed Morey to push the envelope on what was possible (and acceptable) in basketball, abandoning the in-between game for a parade of threes, free throws, and layups. More pertinently, they abandoned the big man altogether last season, swapping out Clint Capela for former Sixers wing Robert Covington, who masqueraded as a center on a Rockets team that ended up falling to the Lakers in round two.

You can't exactly go that way with Embiid on the roster. You can't exactly go that way with most of this roster, for that matter. This is a team that got bogged down with multiple players in the mid-post at a time last season. How a data-friendly organization ended up there is a story for another day, but they are hardly equipped to go full tilt from deep the way Houston did.

Not a problem, says Morey. In Houston, he says, he used to get asked what he would do if he had Shaquille O'Neal on the roster. His answer? He would have given Shaq the ball 100 times per game.

“The goal is not to shoot 3-pointers, the goal is to win," Morey said Monday. "You can score on offense in a whole bunch of different ways. Joel happens to be one of the most efficient post-up players in the league."

It's a sentiment that was echoed by Rivers Monday and had already been endorsed by the new head coach at his opening presser. The Sixers are selling a message of scoring and winning by any means necessary. K.Y.P., as the kids say. When you have a seven-footer with considerable strength and high-level touch, there's no sense stationing him on the perimeter and calling it a day.

Leaning on Embiid isn't the traditional/anti-analytics stance a lot of people might believe it is anyway. Shots at the rim and from the free-throw line are treasured just like three-point shots are, and Embiid has proven quite adept at finding those for himself, even when placed in less than ideal circumstances. The goal, Morey says, is to adapt the team around the franchise player, not the other way around.

"The best way to win in the NBA is to take your talent and figure out how to utilize them the best. Right? It’s not to take your talent and hammer it into a particular system," Morey said. "It’s to try to get the most out of who you have. It doesn’t take much to look at when Joel is on the floor and healthy, and he’s been in here twice a day for quite a while, he’s very focused and motivated, this is an unbelievable defensive team."

"The fact that he’s also an extremely good offensive player, Joel is the kind of player you win championships with if you look back through NBA history. We were trying to build our best team around our talents in Houston, but here Doc is going to take the talent we have and use them to the best of our ability."

Maybe all of this ends up being a smokescreen, Morey hiding his true intent behind a good sales pitch. By most accounts, he has been the most active executive in the league during his time in charge of a team, and he didn't build a consistent winner in Houston by giving away his deepest-held beliefs.

But this is the man meant to come in with a fresh set of eyes and ideas to revitalize the organization, whatever the cost may be. He has no attachment to any of the players, at least not yet, and as he made clear during his first 30 minutes as a public-facing employee for Philadelphia, he'll move what (or who) it takes if it means they can win.

In that context, it is noticeable that it was Embiid who earned the strongest endorsements as a potential championship-driving player. Now we'll see what Morey does to make that possible.