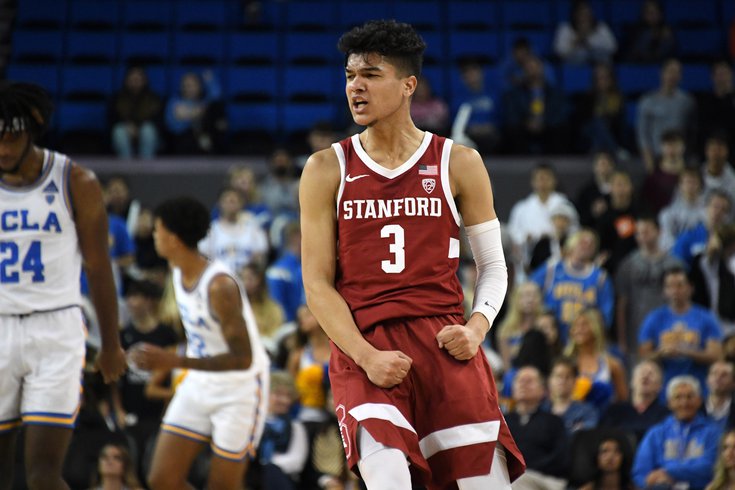 Will the Sixers take Stanford guard Tyrell Terry with the 21st pick in the draft?

If you can believe it, we're only weeks away from the first November NBA Draft in league history, and the Sixers continued to be linked to Stanford guard Tyrell Terry as we get closer to the draft.

Bleacher Report's Jonathan Wasserman, who covers the NBA Draft extensively throughout the year, published a new rumors column on Thursday detailing intel on risers in the draft process. While Kira Lewis' stock climbing is bad for the Sixers, who probably will be out of the running to get the Alabama guard at 21, Terry remains in the mix:

Stanford’s Tyrell Terry got people talking by measuring around 6'3" and weighing in at 174 pounds, a notable difference from the 6'2", 160 pounds Stanford lists him as. I’ve heard Terry linked to the Los Angeles Lakers, Milwaukee Bucks and Philadelphia 76ers as teams showing interest.  [Bleacher Report]

In normal years, you can dismiss a lot of pre-draft rumors off-hand as posturing from teams who are trying to hide their intent. That's a little harder to accomplish this season — the workout process has been cut down considerably as a result of the COVID-19 pandemic, and teams can't mask their interest in players when they have limited opportunities to collect intel.

Terry, you may or may not recall, actually acknowledged the interest from Philadelphia in a Zoom call conducted with reporters late last month.

“I’ve had great communication with them, as well as my agent,” Terry said on the call. “I think it’s an organization that has a lot of pieces, a lot of talent. I think it’s going to be interesting to see how they all put it together to make that next jump in the Eastern Conference. I’m very aware of what the organization has and what their values are. I’ve had great communication with them thus far.”

“During my interview, there’s a section where you’re allowed to ask questions. One of the questions I asked them, how do they see me fitting into their system? They had some really positive responses. They love my shooting, the uniqueness of my shooting, and my ability to play lead guard as well as play off the ball. I’ve had great conversations with them."

That should be music to the ears of a lot of fans in Philadelphia. A 19-year-old guard who shot the lights out during his only collegiate season, Terry shot a blistering 41 percent of his three-pointers at Stanford, and was as good as it gets as a spot-up player, finishing in the 99th percentile on catch-and-shoot attempts.

It is easy to fall in love with the fit based on those numbers alone. A future with Terry playing off of Embiid in the post or Simmons attacking the basket is not hard to envision. Terry stands to benefit from the attention the stars draw, and the stars stand to benefit from teams needing to hug him on the perimeter. Sprinkle in some pull-up shooting on top of that and you're cooking with gas.

There is some downside to Terry — though he's viewed as a strong playmaker/high-IQ player, there are concerns that his frame combined with his iffy handle will hold him back at the next level. As Wasserman notes in his story, the difference in measurement is encouraging, and if the Sixers simply need to feed this kid protein shakes to bulk him up over time, they could end up getting a steal.

However, we'll see if that's a realistic outcome. Terry will enter the league giving up weight to the vast majority of players, and that won't help as he tries to get by with so-so creativity off the dribble. Guards who struggle to separate could end up being relegated to spot-up heavy roles, and while that's valuable for the Sixers, ideally they need guys with three-level scoring skills.

At this stage, Terry is just not a good bet to finish in traffic at the next level. The good news is that Philadelphia is well-equipped to deal with the pain Terry's size might incur on the defensive end — with Embiid anchoring the paint and Simmons as switchable as anyone in the league, Philadelphia can hide Terry defensively while they try to max out his impact on offense.

And it's worth noting this — Daryl Morey's hiring threatens to disrupt any assumptions we may have about Philadelphia's draft process and evaluations. Maybe in a past life they wanted Terry, or Desmond Bane, or any number of players who could fall to them at No. 21. But there's no certainty they even keep that pick, with Morey's arrival likely to trigger some major activity on the trade market.

Until then, we'll try to keep you in the loop with each of the new developments and rumors that emerge during the pre-draft process.

MORE: The Knicks are open to absorbing contracts. Can Sixers find a trade that makes sense?