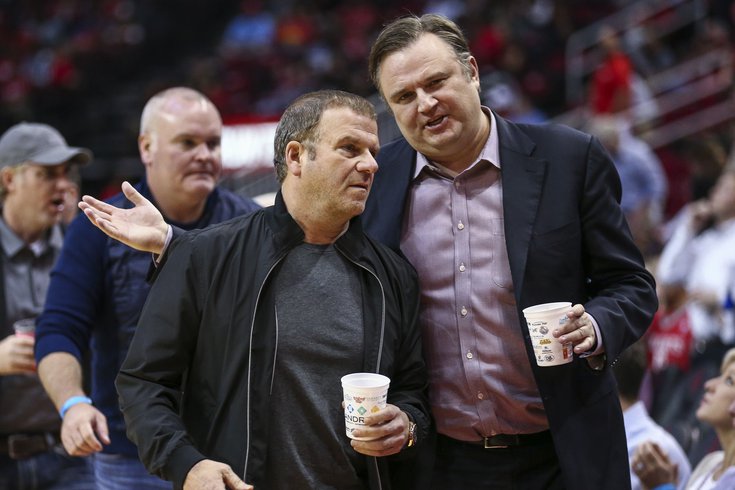 Daryl Morey is expected to sign a five year deal to become President of Basketball Operations for the Sixers, a team source confirmed to PhillyVoice on Wednesday. ESPN’s Adrian Wojnarowski was the first to report the news.

Throughout the offseason, sources with the team insisted the Sixers were focused on on bringing in talent underneath GM Elton Brand, but they never dismissed the possibility of a hire above him, even as the team proceeded to hire head coach Doc Rivers. Morey parting ways with the Rockets changed the conversation, opening the door for a second look at the front office restructuring — even after more basketball ops hires were made recently.

No longer in a position where they would have to cough up an asset or two to lure him away from Houston, the Sixers went after someone they expressed interest in previously without anything holding them back. It's a statement of intent on Philadelphia's end. With a lot of money already committed to a roster filled with big names, the Sixers have now hired the best executive free agent and the biggest coaching free agent in one offseason.

The former Rockets head honcho brings a level of experience and command the Sixers simply didn’t have previously. Since taking over the Rockets in the spring of 2007, Houston has had the second-best record of any franchise in the regular season and made the leap to contender status without ever having to bottom out to do so. The 2018 Executive of the Year has never overseen a losing season, and the Rockets have appeared in the playoffs for eight straight years and counting.

Morey is best known for being the most prominent numbers-friendly executive in basketball, a graduate of Northwestern and MIT who began his NBA career in the operations department of the Boston Celtics. Under his watch, the Rockets and their feeder programs have pushed the limits of what people thought was “the right way” to play basketball historically, helping to usher in the era of volume shooting from three we find ourselves in today.

Do not let his background as a numbers man fool you, because his central belief as an executive is about as traditional as it gets — stars are the players who move the needle, and the pursuit of stars by any means necessary should be the top goal of any basketball franchise.

In the early years, that added up to a lot of wheeling and dealing. Morey inherited a team featuring Yao Ming and Tracy McGrady, whose careers were in the midst of crumbling as a result of injuries, and would eventually pull the trigger on a deal to move McGrady in 2010 to begin the process of starting over. A series of trades and a couple years later, the Rockets had stockpiled the chips to trade for Oklahoma City’s James Harden, who blossomed into a yearly MVP contender and an offensive force with his own team in Houston.

Getting there was about the small moves and margin wins as much as dealing McGrady, or the Kyle Lowry trade to Toronto in the summer of 2012. Players he drafted with second-round picks — Carl Landry and Chandler Parsons come to mind – became valuable pieces in bigger moves or cheaper replacements for veterans they dealt for one reason or another. Parsons, for example, essentially became what the Rockets hoped they were getting when they signed Trevor Ariza to a free-agent deal in 2009. Luis Scola, who the Rockets acquired for almost nothing during his first summer on the job, became a crucial role player on the 2007-08 team that would win 22 straight games.

The James Harden trade is Morey’s claim to fame, but he was also the guy who unearthed Patrick Beverley, a journeyman playing in Russia, who would eventually become part of the package to acquire CP3. Despite never owning a premium pick of their own, the Rockets found high-level contributors like Clint Capela with picks later in the draft, and more importantly, they actually showed they cared about second-round picks. You can quibble with some of his free agent decisions, certainly, but he also proved to be a fairly effective recruiter, luring guys like Dwight Howard away from destination markets to play for Houston.

If not for Chris Paul’s injury in the 2018 Western Conference Finals, Morey likely would have overseen at least one title-winner, and who knows how the path forward changes from there for Houston.

Morey’s willingness to make moves and take big swings is admirable and has often paid off. But the nature of being an active dealmaker leads you to some dark places, and not every move has paid off. If there’s an overarching reason for that, it was his pursuit of talent without consideration for some of the human elements of the game.

There has been one issue or another with personalities clashing over the years in Houston. Harden and Howard often worked on the court, but both reportedly tried to get the Rockets to trade their co-star. It’s not like Howard’s eccentric personality was a secret when they brought him in, but Morey decided to go ahead with bringing him in anyway, betting on talent to win out.

In the summer of 2015, Morey executed a multi-player deal to acquire Ty Lawson, a talented guard whose NBA career fell apart as he dealt with issues of alcohol abuse. Those off-court problems weren’t a secret at that point — Lawson was arrested twice in 2015 for driving under the influence, including one incident that came just six days before Morey pulled the trigger on a deal to acquire him.

Trading for Paul is what pushed the Rockets as close as they’ve gotten to a title under Morey, but he and Harden would eventually butt heads, leading to the trade for Russell Westbrook that looked steep at the time and seems disastrous now. Westbrook is a worse player than Paul on a worse contract, and the Rockets gave up a king’s ransom of picks for the privilege of making that deal.

Issues like these have ultimately faded because of how Morey has been able to adapt after a failure, but they get to the root of the issue. The Rockets have been able to extract a lot of value from a lot of places. Chemistry, though, has always been a question mark.

The partnership with Rivers is interesting, because they would seem to represent two sides of that coin. Rivers is the guy for whom chemistry has always been at a premium, who preaches sacrifice and commitment to a greater goal than individual success. Morey has let the stars run the show to a certain extent, and perhaps the Sixers will get the best of both worlds with this hire.

We'll have more on what this means as the days pass, but in short, this is a massive splash for Philly that inspires plenty of questions about the path forward.