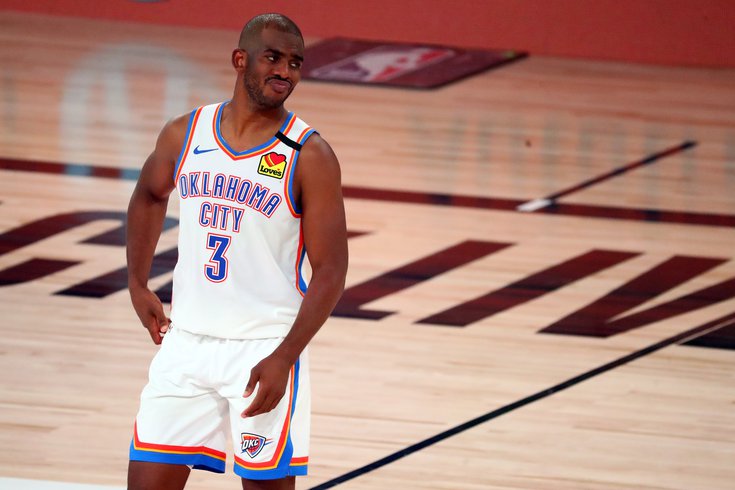 By now, you have heard just about every Sixers trade proposal under the sun. Buddy Hield and Chris Paul have been arguably the two most prominent names in any fake trade chatter, with each man offering a skill set the Sixers need to better support Joel Embiid and Ben Simmons.

But until now, most trade scenarios have only involved one of those players. A new proposition has emerged with both men in it, but don't expect both to find their way to Philadelphia.

In Monday's episode of the Hoop Collective podcast hosted by Brian Windhorst, the ESPN reporter sat down with colleagues Tim Bontemps and Kevin Pelton to discuss trade possibilities for four players: Chris Paul, Victor Oladipo, Jrue Holiday, and Bradley Beal. The Sixers are not really threats to trade for either of the latter three because of cost and fit (though I suppose they might be able to pull off a Holiday deal with the right wheel greasing), but they remain one of the only logical suitors for the veteran guard.

(A quick, but important caveat — as he so often does, Windhorst noted at the top of the pod that while these scenarios have been discussed with people around the league, they are not actual conversations and they are not reporting these as real possibilities. I'm technically breaking the rules by aggregating here, but whatever, sorry Brian!)

Within the discussion about Paul, Bontemps floated the following framework.

(For the Trade Machine disciples following along at home, you will get a failure message from this one because ESPN's version of the machine isn't updated for next season's salary numbers yet. Use this one instead — it lets you include picks, too.)

There has been a big hang-up for a lot of Sixers fans in trade discussions about parting ways with Matisse Thybulle in any move that sends Horford packing. That's understandable — his incoming head coach called him an All-Defense caliber player during his opening presser, and the Sixers can't really afford to part with productive young talent right now.

This is a way around that, with justifications to do the deal for all three teams.

The Sixers angle: You're getting Chris Paul, a future Hall of Fame guard who is coming off of an All-NBA season. A lead playmaker who can set the table for Joel Embiid and Ben Simmons, serve as a leader on and off the floor, and alleviate a lot of your crunchtime concerns with the current roster. If you're going to try to win now — the Sixers currently have the 12th best odds to win the 2021 NBA title at -3000, according to TheLines.com — you might as well make the attempt with a guy who can actually play alongside your best players.

Of course, that opens you up to a lot of other questions. Is Ben Simmons going to be happy with this arrangement? Yes, he was willing to slide to forward toward the end of last season, but Shake Milton playing point guard is a much different proposition than CP3 playing point guard. Paul will control the offense in every meaningful way, and while that will almost certainly be to the benefit of the team (and especially their star players), that doesn't mean they have to like it.

There's also the factor of Paul's relationship with Doc Rivers. The two parted on terrible terms when Paul forced his way out of L.A., and though they've mended fences since, that could be a relationship that only works from afar. Playing the occasional round of golf together or working together on social justice causes isn't the same as being in the foxhole together, traveling together, practicing together, and working together all day, all year.

(One last "negative" that is really just a question about ownership — acquiring Paul would add salary to a Sixers roster that is already bloated and in the luxury tax. You'd be off his deal in two years, but you're potentially paying even more in the luxury tax for this team that has proven nothing yet. That's the downside to many permutations of a Chris Paul deal.)

The Thunder angle: Buddy Hield was basically a folk hero in Oklahoma during his college run, and while taking on his salary would lock the Thunder into his contract for the foreseeable future, he would provide readymade production and fit into a complementary role next to a growing Shai Gilgeous-Alexander. Plus, you get a flier on Zhaire Smith, who I think doesn't have a real chance for minutes in the rotation in Philly and would be better suited in a rebuilding situation.

On the other hand, the Thunder might be stripping this down pretty dramatically, with a bunch of their top players (including Steven Adams and Dennis Schroder) on deals that will expire at the end of the 2020-21 season. As PhillyVoice reported previously, league sources indicated Billy Donovan wanted to coach a team with stability on the court and in the front office, a big part of why he mutually parted ways with Oklahoma City after the season was over.

Within that context, maybe they're content with bringing in a guy like Hield who could contribute to their next good team — he's only 27 and his deal runs through 2023-24 — and maybe they're not. Do they want to pay Hield that much money on a team that could be bad? It's hard to know at this stage and their overall approach could vary depending on the sort of deals Sam Presti can find in the marketplace.

The Kings angle: Moving Hield makes sense for Sacramento, who seem prepared to ink Bogdan Bogdanovic to a sizable deal in free agency this summer. Taking on Horford is a little dicier of a proposition, but they were rumored to have interest in him last summer, and might still be able to be convinced that the situation in Philly was the problem, not Horford himself.

Then again, the Kings are operating under new leadership moving forward, with Vlade Divac out in favor of former Houston executive Monte McNair. Would a disciple of Daryl Morey really want to bring another big into the picture for Sacramento, knowing they need to develop (or at least evaluate) Marvin Bagley, Harry Giles, and Richaun Holmes?

A new lead executive in charge also typically means there's not as much immediate pressure to win, so a move to compete in the short term isn't as necessary as it would have been for Divac, who was operating on borrowed time. The Kings are in the midst of a long playoff drought and face stiff competition in the Western Conference. Horford might not be enough to move the needle — but that's why you toss in the first-round pick to sweeten the pot.

While I'm reluctant to give my friend Bontemps too much credit for this framework, this is a deal I think has just enough merit on all sides to make it worth considering.