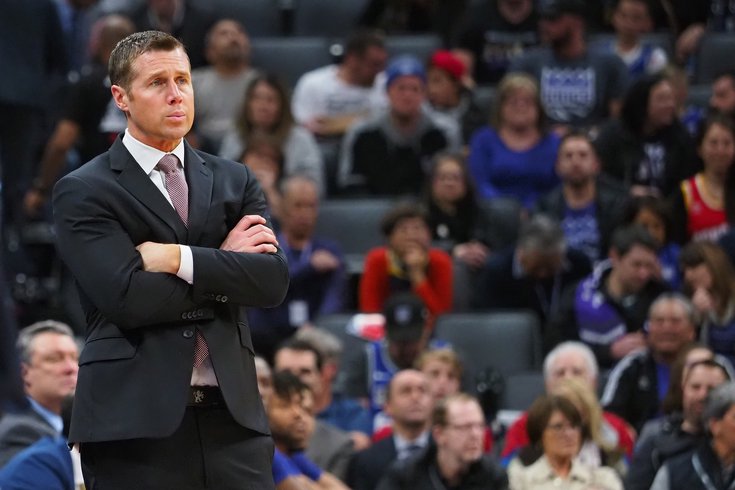 Dave Joerger will join Doc Rivers' staff as an assistant coach for the Sixers, a team source confirmed on Thursday afternoon. ESPN's Adrian Wojnarowski was the first to report the news.

At 46, Joerger already has an abundance of coaching experience under his belt. Fresh out of college, he took a GM job with the Dakota Wizards that eventually led to a prolific minor league basketball run. Joerger won five championships in the minor leagues and had 18 different players called up to the NBA during a four year stretch from 2003-2007. Rising up the ranks as an assistant coach for Grizzlies, Joerger's promotion to lead assistant and captain of the defense coincided with a dramatic improvement on that end for Memphis.

During his early days in charge of the Kings (and frankly, for much of his Memphis tenure), Joerger's teams were accused of being a plodding, inefficient offense built around too many midrange shots and post-ups (hey, that sounds familiar). But Joerger dialed up the pace and sprinkled in new looks during his final season in Sacramento — including split-cut plays and "Spain" pick-and-roll — that might be of use in Philadelphia.

Diversity in thought and style is going to be critical for a Sixers team whose two primary pieces are stylistic opposites on offense. That makes Joerger an intriguing match with what they have on hand.

But Joerger's credentials as a basketball thinker were never really in question. Joerger has found himself out of a job on two separate occasions because of an inability to get along with people, something that was concerning for a potential head coach but might be less meaningful for him as an assistant.

In Memphis, Joerger clashed with Grizzlies management, and the atmosphere was reportedly so toxic that he actually asked for permission to interview with the Minnesota Timberwolves after just one season with the Grizzlies. That toxicity bled into relationships with players, and Joerger told reporters in Memphis that he believed Marc Gasol was trying to get him fired during the 2015-16 season.

When Joerger parted ways with the Grizzlies, their general manager indicated he wasn't committed enough to the job. In Sacramento, Joerger once again found himself at odds with the front office, and when the Kings eventually parted ways with him, it was reported that Joerger was on his way out in part because Vlade Divac wanted to, "consolidate power" in the organization. Joerger had some well-publicized clashes with young Kings players, noticeable enough that rival players even stood up for them later (see tweet below).

Maybe if his coach didn’t yell at him for MAKING the same shot he would have shot the mf... https://t.co/uqtT7L8yMu

(While we’re on the subject, perhaps this will cool any talk about the possibility of trading for Buddy Hield, who Joerger had some run-ins with in Sacramento.)

Those traits would have made him a tricky selection for head coach of this team. With some volatile personalities already in need of sorting, Joerger's penchant for conflict might have been the straw that broke the camel's back.

However, he might be the perfect sort of assistant to have alongside Rivers. He has different ideas from and X's and O's perspective and different sort of personality than Rivers, which could create a nice push-and-pull dynamic depending on what the moment dictates. The ability to delegate responsibility to an assistant with former head coaching experience could be a boon for Rivers, who has a lot to sort out as he takes control of a new team. And as we've written about previously, Rivers' security in the lead position is exactly what makes it possible to bring in a guy like Joerger, with the head coach secure no one will be gunning for his job.

The team would not share more information as of this writing about his title or his expected responsibilities in Philadelphia, but Joerger is a strong add to Rivers' growing coaching staff in Philly.