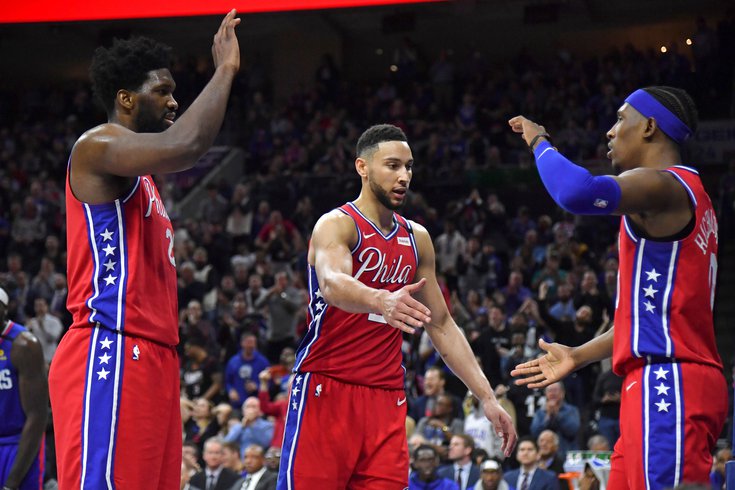 Doc Rivers may not receive credit for sparking an offensive revolution in the way Mike D'Antoni did 15 years ago, but don't let that trick you into believing he lacks offensive credentials. Having overseen a consistently great offense during his time in Los Angeles, Rivers is capable of extracting more value from known quantities and devising night-to-night gameplans that push his teams toward the top of the conference.

The Sixers, on the other hand, are coming off of a season where they looked to be without a plan or a clue on many nights. They played slow, clunky basketball and struggled to make sense of their parts, with even Joel Embiid regressing under the strain of their offense. In desperate need of direction, in steps Rivers.

It's a hard roster to draw comparisons to, but over the years we've seen a lot of examples the Sixers can apply to the current group. This isn't an all-encompassing look, but a glimpse into how the Sixers can get more value out of the pieces in place.

Simmons has been mostly silent since Rivers was hired, save for a few glitzy Instagram posts about his offseason, while Embiid came out almost immediately and was vocal about his excitement. But no one should be more fired up than Simmons for Rivers' arrival.

There are two things I know about Rivers that make me bullish for Simmons:

Those two ideas seem to be disconnected. Most people seem to be focused on the idea that Simmons is either going to have to run the offense or transition into playing forward more full-time. I would disagree, unless and until the Sixers make a trade for a lead ballhandler a la Chris Paul. He's most likely going to be trusted to play a hybrid role that gives him a lot of playmaking responsibility and plenty of touches near the basket. As Rivers made clear on Monday, he's not coming in trying to turn Simmons into a floor spacer.

When people think about Rivers getting more out of Griffin, they think about him being unleashed as a playmaker from the elbows, which was admittedly a big deal. I don't know that Rivers is going to get much more out of Simmons than Philadelphia already was as a passer. But using Simmons in multi-screen actions, like the one below, is the ticket to getting him easier baskets.

There are what I'd call 3.5 screens on this play: Griffin's initial screen for Redick, the handoff screen between Redick and DeAndre Jordan, Pierce's screen to free Griffin on the baseline, and Chris Paul making just enough contact to keep that separation for Griffin, turning it into a quick finish at the rim. Movement is happening in multiple directions, and these are the sort of ATO sets Rivers has earned adulation for.

A few words from Rivers' opening press conference will convey the message here.

"I like that he's a multi-positional player. He's a big 3, he's a quick 4, that's how we used him a lot in LA," Rivers said about Harris on Monday. "I love his shot, has a great in-between game, which is sometimes lost in today's game, and I think he's a terrific straight-line driver. We have to just get him into positions to be able to do that. With us, we put him in more pick and rolls than I think he'd ever been in his entire life, and we had some success with that. Pick and rolls to me are about combinations. You put the two combinations together, you create problems defensively for the other team and Tobias can do that."

Harris played his best basketball ever under Rivers, and while some of that may have just come down to unsustainable shooting, Rivers will likely give him enough freedom and responsibility to get closer to that level than we've seen in Philadelphia. Like a lot of scorers, Harris is streaky, and giving him more touches could be the key to Harris coming through when it counts rather than bricking a bunch of mid-range garbage. Using Harris more in 4-5 pick-and-rolls will allow him to attack big men on switches, an area where he excelled under Rivers previously.

The biggest point of emphasis for Harris, in my mind, is to be a more aggressive shooter from deep. This was a problem for Harris even during his sustained run of excellence under Rivers in L.A. The Clippers run a nice sideline out of bounds play to get Harris what should be an uncontested look from three here, but his feet aren't set so he ends up taking a side-dribble, buying the defense time to contest the shot anyway.

This is as much about the pre-catch prep as it is anything else. Turning him into a stationary perimeter player is not the answer to Philadelphia's woes, but they do have to get him in the mindset of being more of a quick-release shooter if they can, and they certainly need to call more designed looks like this one to encourage a quicker trigger finger.

Striking the right balance with Harris is going to be key. They should indulge his in-between game from time to time and get value out of it, but they need him spacing the floor and generating free-throw attempts a lot more often.

Every good Doc Rivers team has had elite off-ball shooters, and perhaps that's the case because he is adept at making use of them. Ray Allen and JJ Redick were terrific under Rivers' guidance in Boston and L.A., and former Sixers guard Landry Shamet is the newest catch-and-shoot guy to find a home in his offense.

Let's stick on Shamet for a second. Though many of his three-point attempts came on kick-outs out of pressure or in transition, the Clippers ran plenty of designed looks for him, often using their bigger weapons as decoys. This is just a small sampling of the sort of stuff Rivers did with Shamet during the regular season:

That last look is instructive for the Sixers because of how Nikola Vucevic is defending Zubac, sagging to the free-throw line against a non-shooter. There's too much traffic in the screen action to get through to Shamet, and Vucevic is in no position to close out even if he wants to. Korkmaz should continue his growth under Rivers.

Alec Burks (if he stays) and Josh Richardson

No guarantee he'll be here next season, but if the Sixers come to terms with the free agent to be, Burks will settle into the role of instant offense guard off of the bench that Rivers has historically treasured. He has not shown he cares a whole heck of a lot if this sort of guy can defend as long as he can score — Rivers stuck with Jamal Crawford long past his point of effectiveness, and Lou Williams blossomed under Rivers' guidance, playing career-best basketball as a sixth man in L.A.

With Rivers tending to favor heavy pick-and-roll, relatively static offenses (his teams have been near the bottom in offensive movement tracked every year since the league made the data available), ballhandlers who can create their own shots effectively will always be king. I've argued plenty in this space that Richardson isn't all that effective as a lead handler, but as one of the few guys who can dribble on this team, lump him into this category too. They will get opportunities, and they will get them often.

This is a somewhat controversial take that I am open to amending as time moves on, but I am not sure Rivers is going to lean as heavily on Embiid offensively as many people would believe. Rivers is not Mike D'Antoni and has an extensive history of making use of big men. That doesn't mean he wants to turn the clock back and run a post-up offense for 48 minutes.

If you look at the tape, Rivers' big men have a tremendous burden as screeners. Sometimes that comes in a pick-and-roll where they're part of the primary action, many other times it's just as the catalyst for a play that doesn't involve the big at all otherwise. You can see that in the Shamet clips higher up in this article, where the big is used as a second screener in the event someone is able to attempt a close-out.

Granted, this Sixers team doesn't share a lot of DNA with the teams Rivers coached previously, and perhaps that will necessitate a change in what he chooses to do. But Rivers' bigger changes schematically have often come on defense — the Clippers were switch-heavy to the point of parody at times last season, even though that isn't a core principle of a standard Rivers-coached team.

That doesn't mean Embiid will be left out altogether, and the Lob City teams found ways to generate easy looks for DeAndre Jordan (a much more limited offensive player) in spite of defenses sagging dramatically to wall off the paint. Instead of using Griffin from the elbow or lower, the Clippers use Crawford at the elbow for a handoff that allows Griffin to get a head of steam going. When the help comes to stop Griffin, Jordan cuts and slams on the nice drop-off from Griffin (full disclosure: this small clip from 2013 is from an old BBALLBREAKDOWN video with a more extensive comparison of this offense with the pre-Doc Clippers).

The subtext here is that career-best fitness should be a point of emphasis for Embiid because if the team is going to create easier looks for him, most of them are going to come on the move and with Embiid not being content to be rooted to one spot. That's something he has to want for himself, but it should be the first message from Rivers to his brightest star when they talk about plans for the season.